I was so excited to race, it was the best feeling to jump off the start line and be with the big pack of runners. The first minute was by far the easiest part of the day. Leading up to the Northwoods Winter Trail Marathon, training had been pretty much on point except two weekends prior where I did not accomplish the every-four-weeks “long trip” of 55 miles that was scheduled. The conditions in and around Jay Cooke State Park were icy that day. I started falling behind my pace and pulled the plug with  14 miles and 4 hours logged in the woods. But the training program went on, and the frustration of failure turned into the excitement to compete!

With recent heavy snow in Duluth, and kind of weird winter conditions up to January, it was really a crapshoot how the trails would allow fast running. I know that sometimes, running on those fat bike trails on packed snow is real nice and real fast! There were two rounds of snow within the race week, the first being really wet and heavy and the second being pretty powdery. It got warm later in the week and race day was in the mid- to upper-30’s. I was contemplating what to wear and decided a long sleeve and my mikeward.cool jersey would work. I had four screws in each shoe and ready to rock.

I was carrying my handheld water bottle with a couple of gels and would make an exchange at the half-way loop. I lined up directly under the arch and the countdown began, then GO! And the crowd ran off. I got to the front very quickly and up onto the snowmobile trail at Lester Park, headed down towards the lake. The first mile was pretty good running on that snowmobile trail, and I noticed a sub-8 minute mile right away. Hmm! Probably should slow down, I thought.

Some of the half guys went out in front, and who I believed was Wynn Davis according to Eric’s pre-race chatter, stuck right behind me. He barely edged me out and took the lead for the marathon until missing a turn that was literally off into the woods–no preexisting trail. I noticed the pink paint on the snow and hollered out, then I was in the lead. We popped right onto bike trails and I lead us on a long stretch, all the way to the top of Lester.

Wynn and I started chatting and the miles started clicking off. He told me he was indeed Wynn. It was a grind up the Lester River but I kept the legs churning. The trail was a little soft. Not too bad and we were making decent time. After a climb of several miles, we jutted out to an intersection atop Seven Bridges Road at Skyline Boulevard, and ran back onto snowmobile trails. It was not long before he went around me. I stopped for a pee break and let Wynn run away. Boy, he took off! He was out of sight in no time. 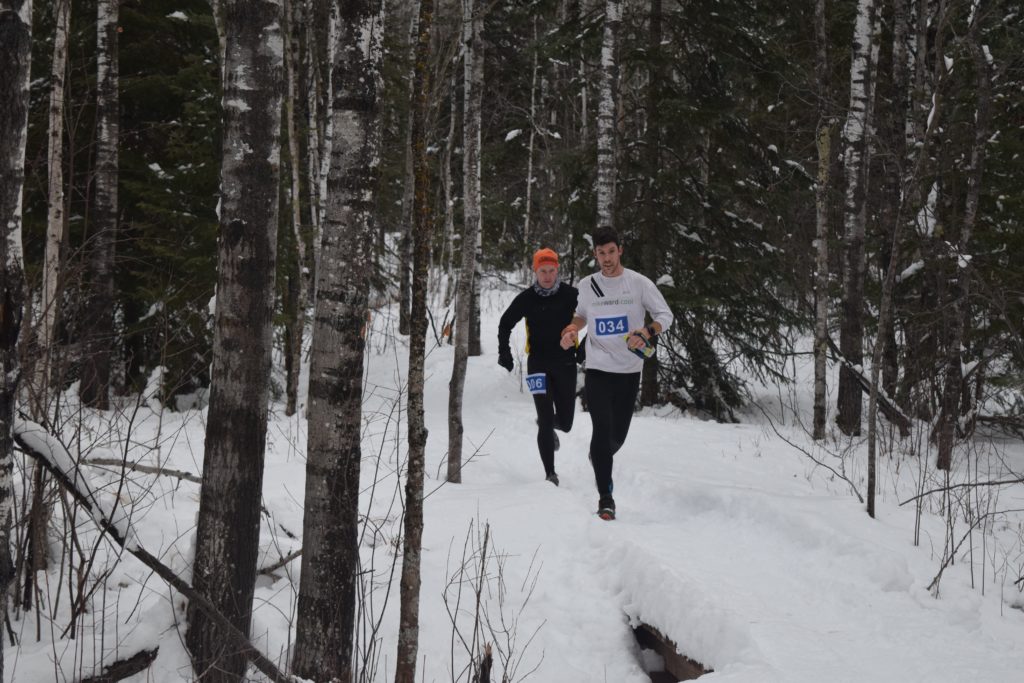 I was already feeling a bit fatigued from the snowy conditions and probably going a bit too hard on the climb. Hey, I hadn’t walked yet! I was getting into a rhythm on the snomo trail but it did feel slow and I was looking forward to the aid station. The aid station stop was real quick as I grabbed a pancake and some chips and jetted off. I was right on time for my goal of 4 hours, so sprinted up the hill out of the aid station, finally on the solid ground of a paved dirt road for once.

It was so demoralizing to get back onto the bike trail. The planks of the bridge were uneven and just so clumsy. The trail didn’t get less demoralizing from there, with the slippy and slidey and steep section to the backside of Hawk Ridge across Skyline. There, the views were sweet, sweeping across the deep grey Lake Superior. I wondered if I was going to see Wynn at all. I was moving good through Hawk Ridge. I didn’t see anyone. 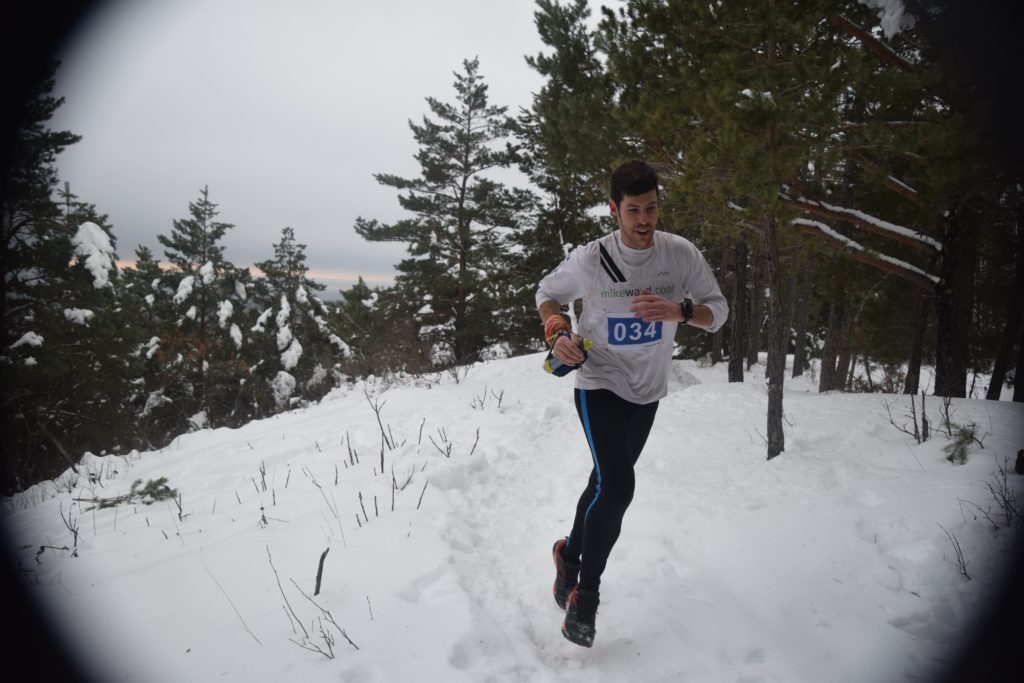 The way down Amity Creek took forever because you could see the start and finish area from high above the ridge and you run so far to finally get back there. A quick check of my watch and I was happy to see that I would certainly make a 2:00 split at the half point. I had eaten my gels, was right on track with water and feeling pretty good stomach-wise and general energy-wise. I could feel the fatigue and was noticing a few specific muscles getting worked hard with all the sliding around and lateral movement. My hamstrings seemed worked as well as my right hip flexor. My ankles were starting to get mad from all the sideways motion.

The half-way point was wonderful, just to have that mental checkpoint, but I did not spend much time and was back across the start/finish line after switching my gel wrappers for fresh ones and trying to eat as much Twix bar as I could in 15 seconds. I saw some half finishers and a couple behind me coming in. No other full marathoners in sight. My watch was at around 1:55 and just bit above 12 miles. Right away, getting back to the early snowmobile miles, I felt so flat. It was like I left my energy stores at the finish line. No! I didn’t do the half marathon! I had to remind my body of that. Or maybe it was because the trail was chewed up. Was I just fresh and springy the first time around? Or did the hundred or so people behind me scramble the not-quite packed snow up? But once I got to the very bottom of Lester and headed back on the long climb, it was really tough going.

The snow was so slippery and no footstrike was solid. Each step was a strain on my ankle ligaments, twisting every time to try and get traction. It seemed so much steeper than the first time. I was swearing, yelling, grunting. I wanted to give up but that is way more frustrating so I just kept the ole leggies churning. I said a mantra to myself: “I like the pain”. It worked! But only temporarily. At Amity Creek trail and Skyline, I didn’t get much reprieve from the sliding snow on the snowmobile trail, but seemed to get in a flow. I was certain it was all uphill, though. Ugh. As I got closer to the aid station, I figured I was 20 minutes down on my second loop compared to the first. I took a little longer at the food table the second time around, filled up my nearly empty water, and took two mouthfuls of food. On the brief road section, I did NOT feel fast, which assured that my tired state was not just attributable to the loose loop-two footing.

By the time I got to Hawk Ridge and crossed Skyline, it was a relief nearly of the magnitude of the race being over. Relief that the worst was behind me and just five gritty miles to go. I was way off my goal of four hours, figured that Wynn was way ahead or finished already or something, and hoping that nobody would come up behind me. I could never know so wasn’t really even concerned. Plus too tired to be concerned.

Atop Hawk Ridge, on the mountain bike trail below the bird observation area and overlook, I passed a snowshoer with trekking poles. He was in for a long day at that point! At a switchback, I noticed him running down the hill above me, and like a flash, another runner behind him. I stretched my neck to catch a glimpse at his bib color, but quickly diverted my eyes back to the ground as I slid around in every direction. Gahhhhh. The slow going was almost comical, and I used that humor to keep my morale up as I got passed. The guy was quick and did not waste time running out of sight. I wondered how many more times I’d be passed, and so tried to push on the downhills below Hawk Ridge and on the lower Amity Creek trails. It seemed like my dead legs and sore ligaments were just blindly succumbing to the overwhelming signals from my brain telling them to keep churning, my brain fueled by the feeling of going fast on the downhill Amity section. Unfortunately, my watch said differently and I was going slow, struggling to get above 11 minutes per mile.

I saw a few more glimpses of the person who passed me, passed a few slower, presumably half marathon people, and then saw the same people a few minutes later. Jeez, those trails twist and turn on themselves all over the place. I crossed over Seven Bridges Road and trudged the final mile. What a relief to finish! I instantly realized that it was fun and not really terrible, and soon after also realized that I got second place, the guy in front of me won, and Wynn took a wrong turn, cut a big section of course and was DQ’ed. That is unfortunate. The final realization was that the now winner was Jon Balabuck from Thunder Bay, a guy I thought I’d raced several times in the past at triathlon races.

I came in just under 4:20, and was totally beat afterwards. I was awarded a mason jar full of peanut M&M’s and joked that I won my lunch.

Food: 3 gels, a couple shot blocks, a Twix bar, and some chips, one small pancake