At the start line, lined up next to my friends Ian and Kyle way up front, I said “let’s get that three hour boys”. Then the moment where you know the start is imminent, then air horns through the microphone and the huge mass lurches forward. Nobody was getting any three hours that day.

My final race in an insane season was supposed to be the 2019 Grandma’s Marathon, which has been my first race of the season in years past. Maybe not very first but definitely first “big” race. In 2019, a sub-3 Grandma’s Marathon was supposed to be the cap on an aggressive, triumphant series of running pursuits. What it ended up being was a slog. A fun, healthy, death march. Using the description “fun” is maybe a stretch. It was fun in hindsight.

The first race in my planned 2019 racing season, Antelope Canyon 55k, more or less went off without a hitch. My training into race season was a little spotty thanks to some plantar fascia pain, a little bit of hamstring pain, and perhaps a mental shortcoming. I couldn’t shake some post-Antelope sore spots before Zumbro 100 Mile, but it was canceled anyhow. That is where the mental aspect comes in to play… A thru-hike of the Superior Hiking Trail was next. I couldn’t pull the trigger. I weaseled out of Last Runner standing and that left Grandma’s Marathon. It was part injury, part work, actually. We (Duluth Timing and Events) had two race timing gigs that I did not want to be absent for. And of course, there is a mental aspect involved. I got to volunteer and hang out at Last Runner Standing so that was good. But the SHT miss is a whole other conversation. Back to Grandma’s.

My plantar fascia band was finicky in the weeks and days leading up to Grandma’s. I was actually right on track with a speedy 16 miler at 3 hour goal pace, or just a bit slower. Through 8 miles of the training run on June 1, I felt good and was holding a 7-minute pace relatively comfortably. I felt smooth. I did feel a strange twinge of foot pain a bit before the turnaround. At the turnaround 8 miles in, I stopped to drink some water and that was not good. My foot got a second to stop the pounding and it realized something was wrong. I told it that no, there was nothing wrong and kept running. Each step was painful. I stopped again, just out of sight from the makeshift aid station, to soak my feet in the cold Lake Superior water, hoping that would somehow reset my sore underfoot tissue. It was strikingly cold, but no relief. I made it through the run but it set me back. The pain the next day was intense. I started my taper promptly from there.

I rode the bus to the start line with my brother Andrew. I knew I had poor training in the previous 20 days after that touchy 16-mile long run. I was scared about another setback with my foot over the course of a daunting 26 miler. This season was already shot! Who cares? I figured I could roll a 3:20 pretty well. But what about going for it? Why not try to salvage my botched running season and go sub-3 hours? I was excited for my brother Andrew because his training had gone really well and I could tell he was feeling fit and healthy. I envied that feeling of having no issues.

It was shaping up to be a perfect day. When I walked out from the busses with my brother, my running pals Kyle and Ian, who had moved from Duluth to Bozeman, MT a couple months prior, walked up right behind us. We chatted for a little bit, and they confirmed my notion that they were going to try and pace off of each other to get under 3 hours and qualify for Boston Marathon. Ooo, that got me excited. I started towards the bathroom and took care of business. I eventually lost everyone and was alone, soaking in the sunlight in my tank top jersey after dropping my drop bag off. There was a light tailwind, sunshine, cooler temps… ideal. I bummed around waiting for the race to start, and was excited to get going as people starting flooding towards the start line. I lined up a bit behind the start… well back as not to get caught up with the yahoos running fast. Not today.

I had my spot and knew there was probably just 5 or 10 minutes before the race start. I looked curiously around for Kyle and Ian. Or Andrew. Anyone? I maybe saw a few familiar faces but didn’t really want to talk. I just wanted to go for a nice jog. All the sudden, Kyle and Ian brush by about two people over from me, flowing intently to the start line. I slipped in between two people and got right behind them. I thought it’d be funny if I was just right behind them all the sudden. Here I am, guys! One of them noticed I was tailing them. I yelled, “let’s get that three hour boys!” and therefore announced my intent to run with them.

The race started and we were rollin’. It was a huge pack right away with 9,000 people running, and we weaved in and out of hoards of people but stuck together through the first mile. Well under 7 minutes. The second mile, 3, 4, 5 all clicked by and we ran together, Ian heckling other runners and Kyle focused on getting his long term goal of a Boston qualifying marathon finish time. We averaged 6:50 or so through the first 5k by my estimate. We were rolling, and I said it aloud. I could tell Kyle was feeling the pace and I was too. Ian was happy go lucky, and not even aware that we were probably a bit under 3-hour pace. I peeled off to take a pee right under the train bridge past Knife River. It was a strategic move to leave Kyle and Ian and run my own race. I felt a little fatigued already. That’s not right. I kept running after a quick stop but considered that I could go more by feel. So I kept it up, still cognizant of the 7 minute pace I was excited to maintain. It still felt smooth. The solo miles clicked by up to the half way point, but I could tell that I was slowing down a bit. It just became a little more difficult to make 7 minute pace feel comfortable. Oh well, I was OK with it and just slowed down. The first half clock read 1:33 or so. On track for a nice finish but I was certainly starting to feel a little more tired than I should have been.

My foot was feeling really good, perhaps because of the taped foot, compression ankle sleeve and compression socks. Then seemingly out of nowhere, my calf started to bug me. I think it was my left one, my problem one. I stopped running and tried to massage it out. Then my knee started to hurt. It was a sharp pain. I thought I’d felt that pain before and diagnosed it as IT band or tight outer quad or something. So I stopped to try to massage that out by deeply pressing my palm into the outside of my thigh.

The miles kept clicking off, and it seemed to be a constant grind as the north shore sections moved to the London Road sections and Glensheen Mansion approached. That spot of the race has, for some reason, always been a very difficult part of the race for me. This time around, I wasn’t in any better shape, but my mind was taking the pain well. It was a slow grind. I was walking through every aid station, and was dumping water on my head from miles before the half, despite volunteers wearing long sleeves and spectators wearing hoodies and jackets.

I pushed up Lemondrop Hill and prepared myself for spectators I perhaps knew. They can’t know I’m running so slow, I thought. Ugh, I am in bad shape! My knee was really bugging me and the compression socks were beginning to be an irritant. I blamed them for my pain. My pace had slowed dramatically, even without the walk stops. I was just jogging, who cares… I felt like an idiot for going out so hard. I’d passed Kyle, no sight of Ian, and wondered if my brother Andrew would be way ahead of his projections and zoom by me. I heard a spectator yell “HOT DOG!!!” and saw a girl run by in a hot dog costume. I figured it’d be smart to try and stick with her to leech off the crowd excitement behind the costume. I couldn’t hang, just kept slogging along. I saw some people I knew and tried to keep my form looking OK despite feeling like crap and a slow pace. I couldn’t look at my watch anymore, the pace field was just disappointing. 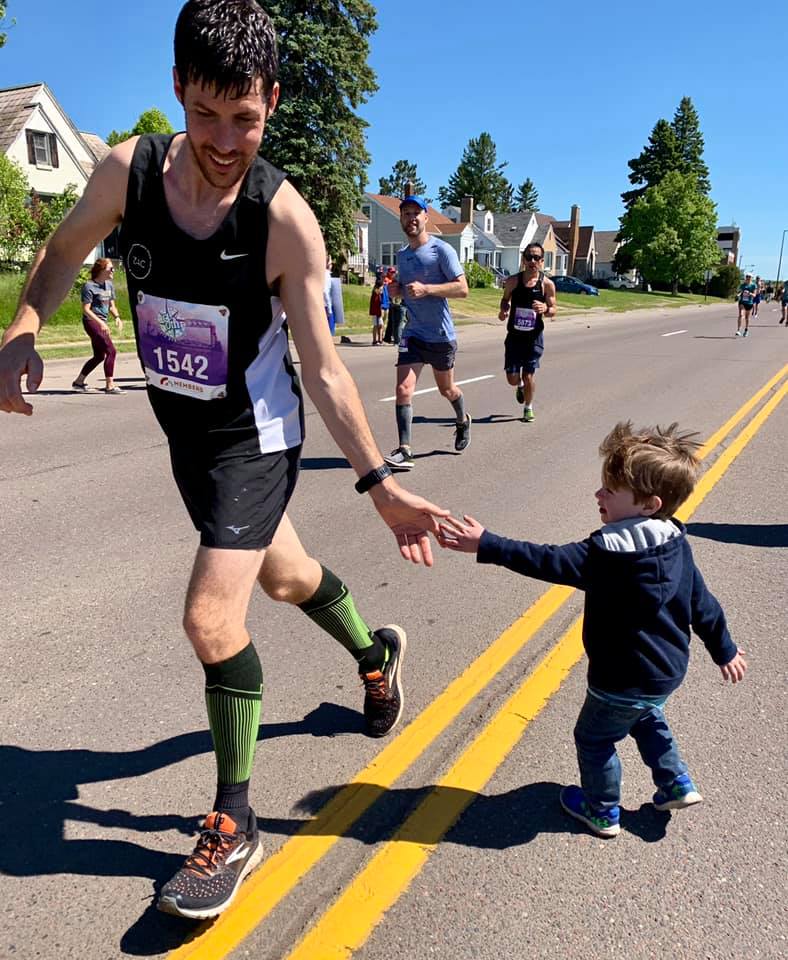 After eating fruit near Super One Foods and turning up to get to Superior Street, I seemed to catch the crowd adrenaline a bit and my pains weren’t so bad. The last miles seemed to click by as well and next thing I knew I was past Fitger’s, onto the modified course on Michigan Street, and to the home stretch on Harbor Drive. I wanted to kick it in at this point, but still couldn’t push. Crap. I suppose I had 25 miles in my legs…. My knee wasn’t working great, but the rest of my body was actually pretty solid. My foot wasn’t bugging me at all, and that was the important part. I wanted to pass those around me, but it didn’t really work like that. I tried to jack people up around me, including a lady who had slingshotted with me all race, seemingly, with her walk/run strategy. She was even walking with less than a half mile to go! Just run it in lady! But I couldn’t hark on her style because she was hanging right with me! My time was definitely going to be slower than my pre-planned 3:20, way off a sub-three hour finish, way way off my personal record, and a massive positive split. 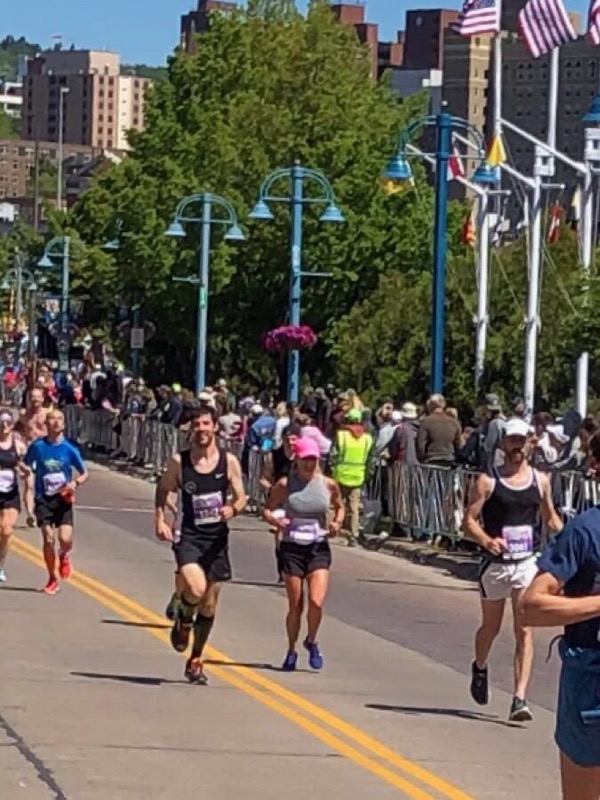 I ran through the finish chute, heard my name from the announcer, and yells from the bleachers where my parents and Emily were standing and jumping around. I came right through the finish and kept walking. No collapsing, no overdramatic heaving, just a smooth walk, race was over. It was a standard finish to the race that capped off a failure of a running season. Then again, I had never planned anything as aggressive and demanding than what I laid out for myself for 2019. I just finished a marathon dammit! I am grateful, happy, and lucky to be able to run, which is a very deep passion for me. In actuality, all of my goals were completed to the fullest: to finish with no worse injuries, and to have fun. It maybe wasn’t fun during the race… well, yep it was fun. It was fun! It was. It really was fun. 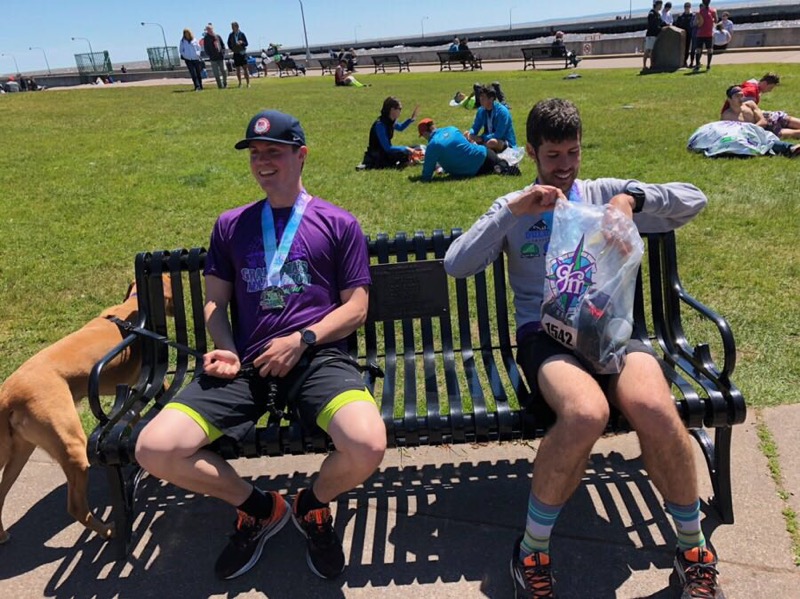