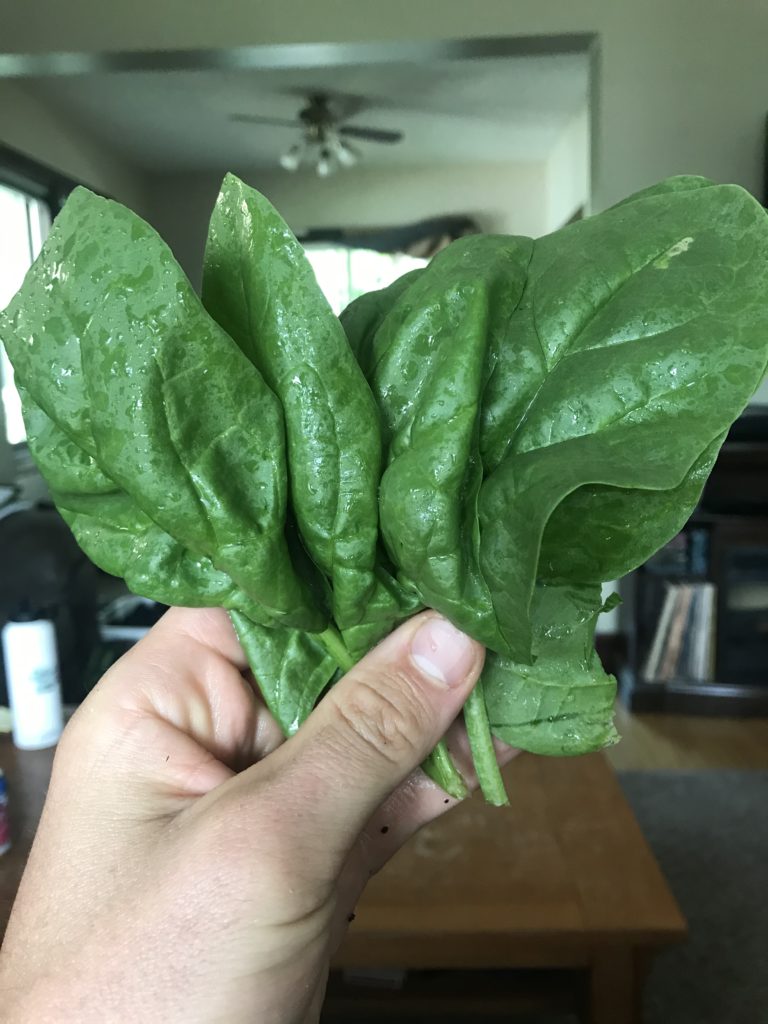 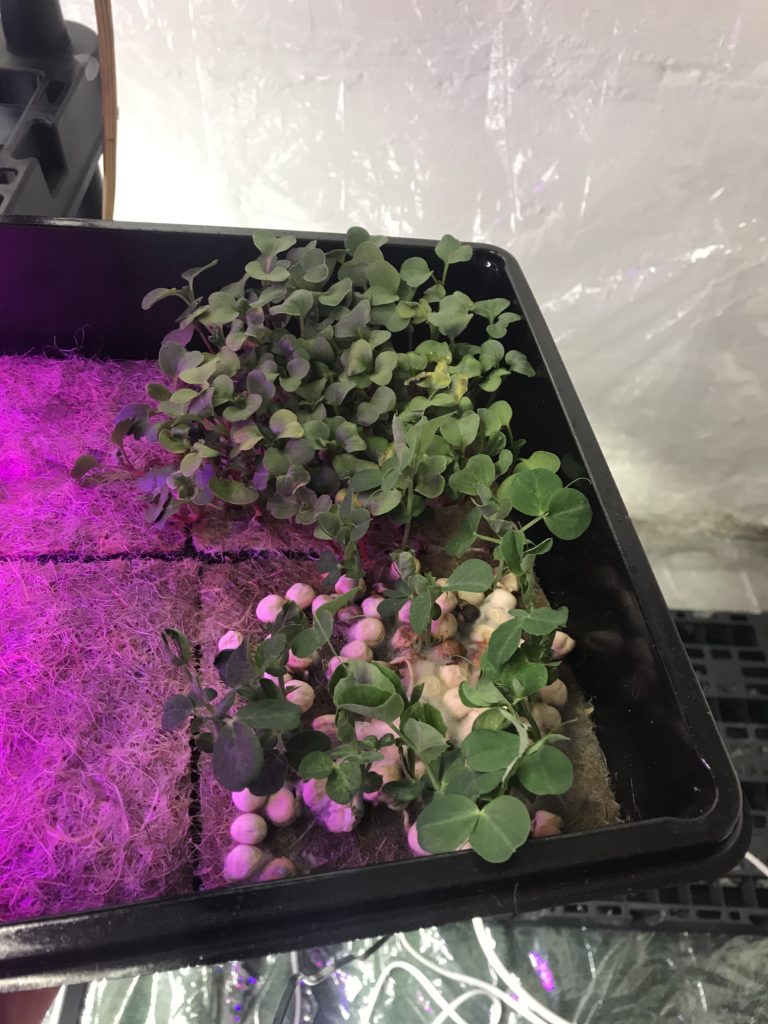 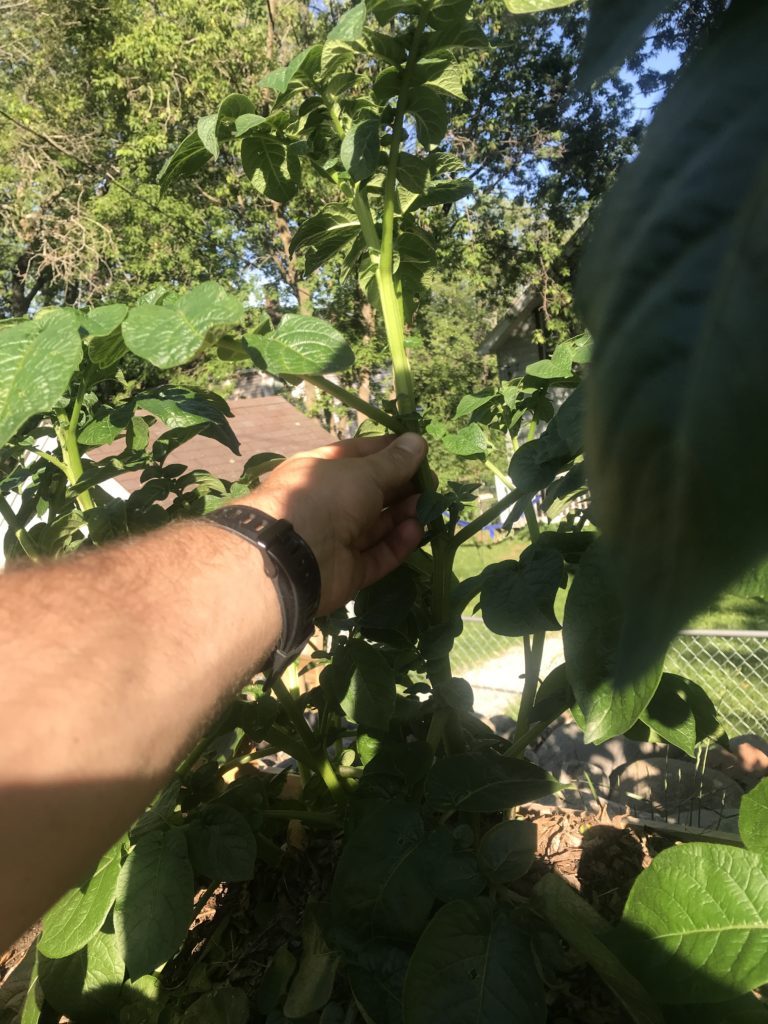 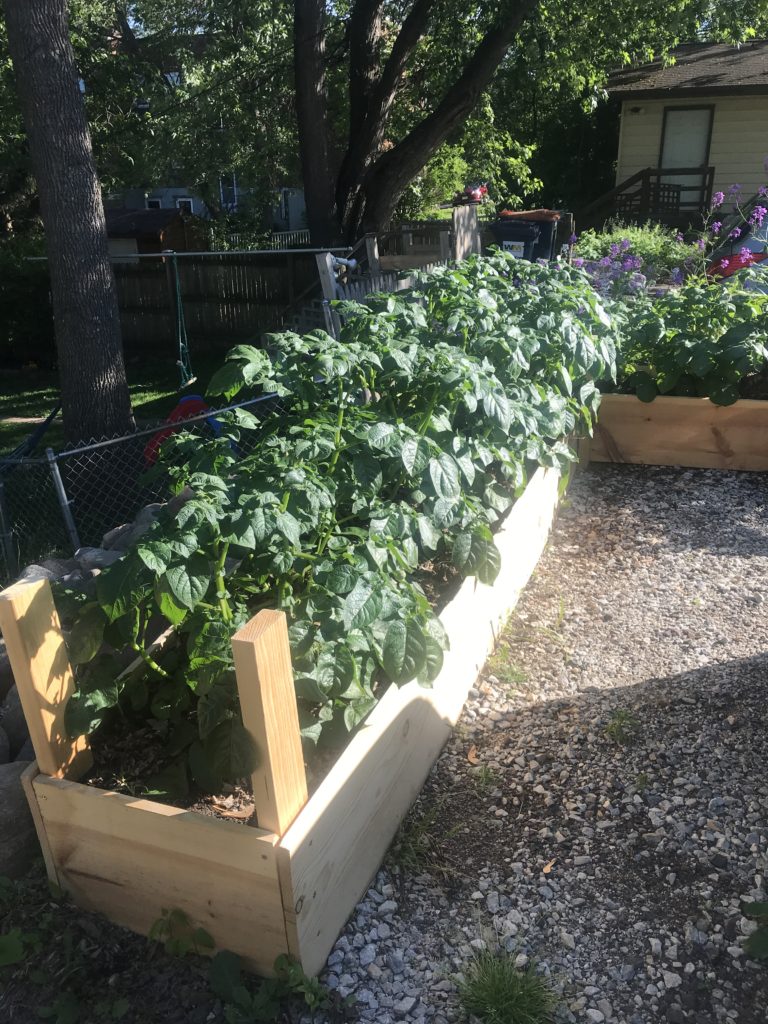 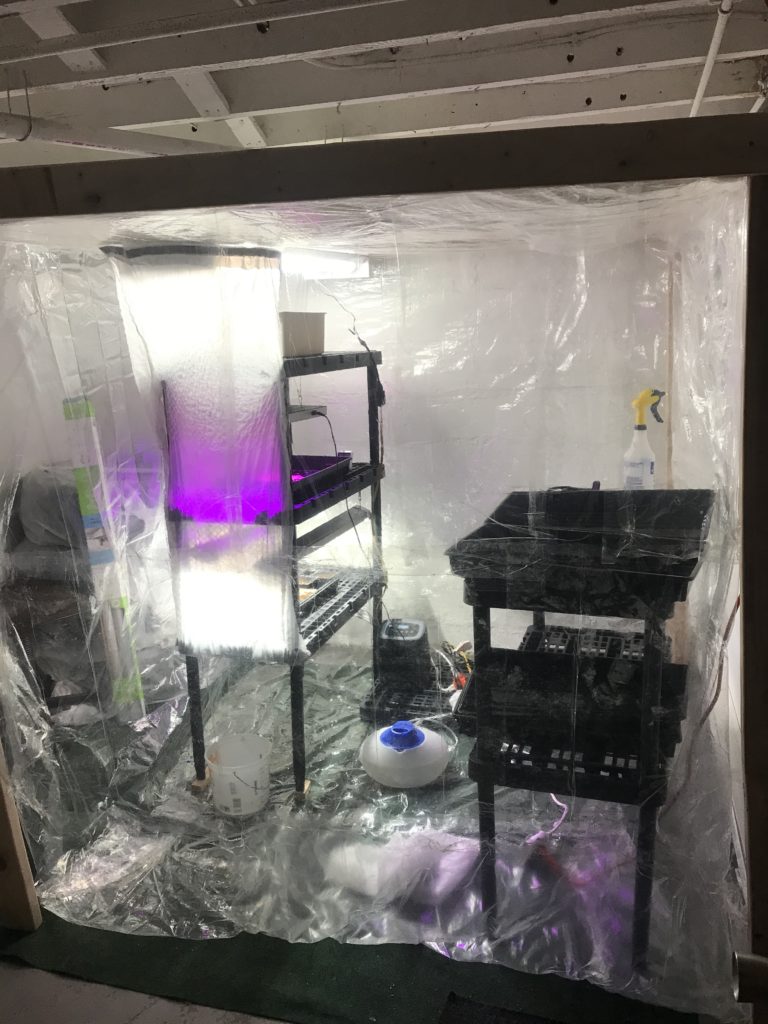 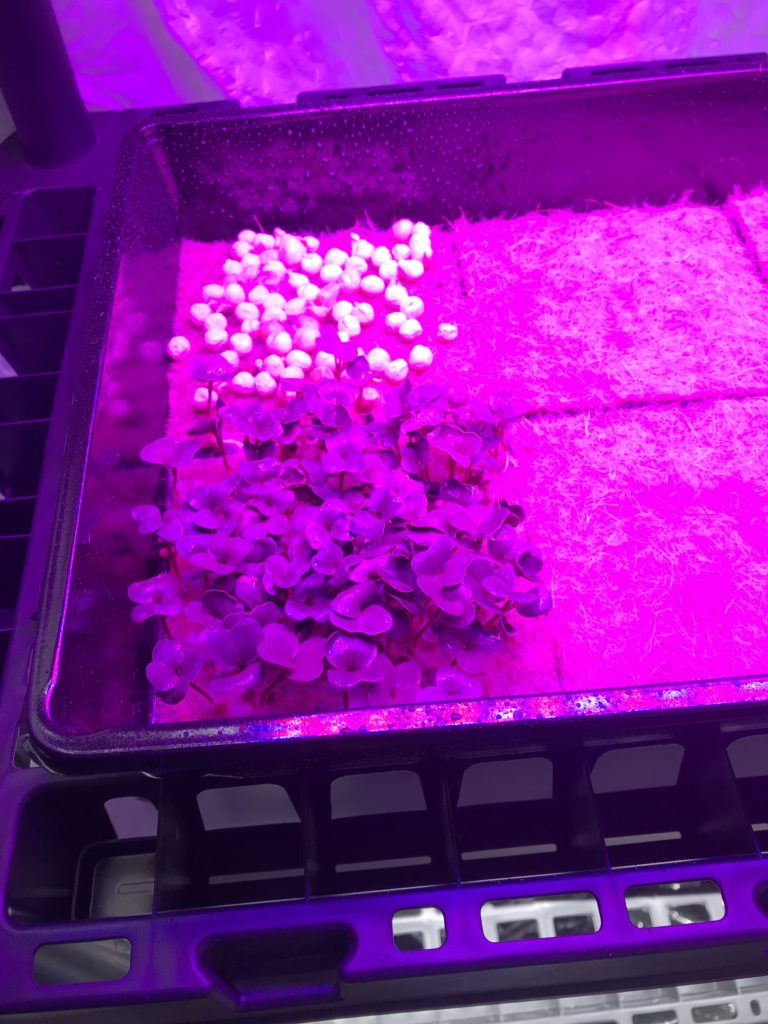 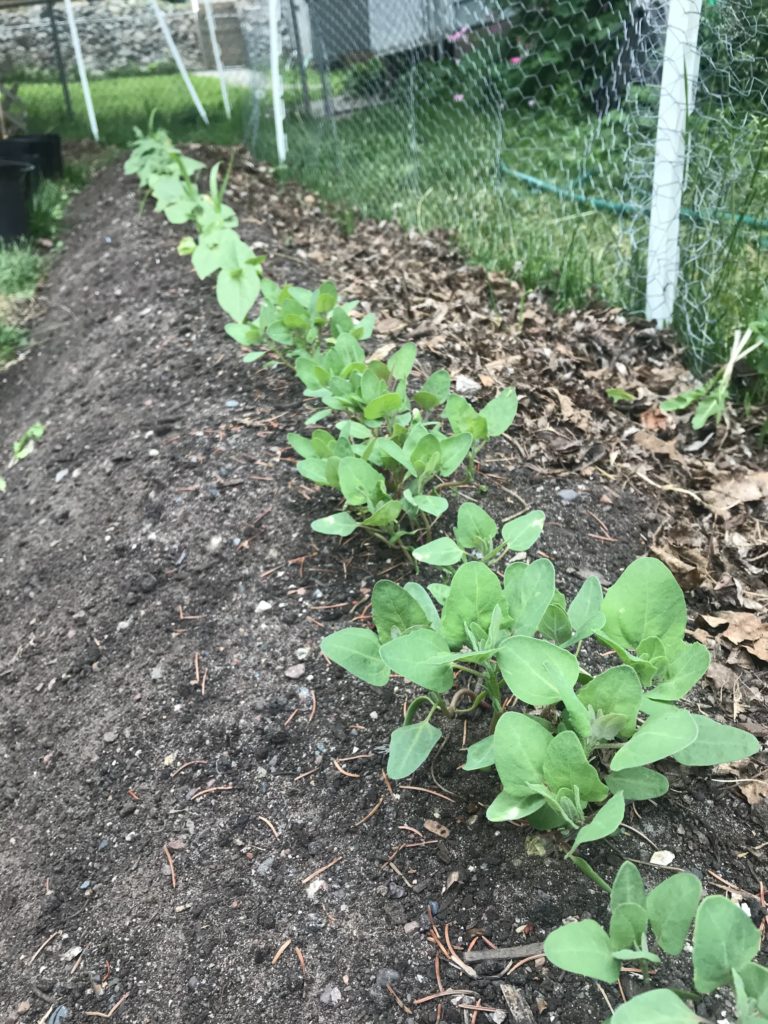 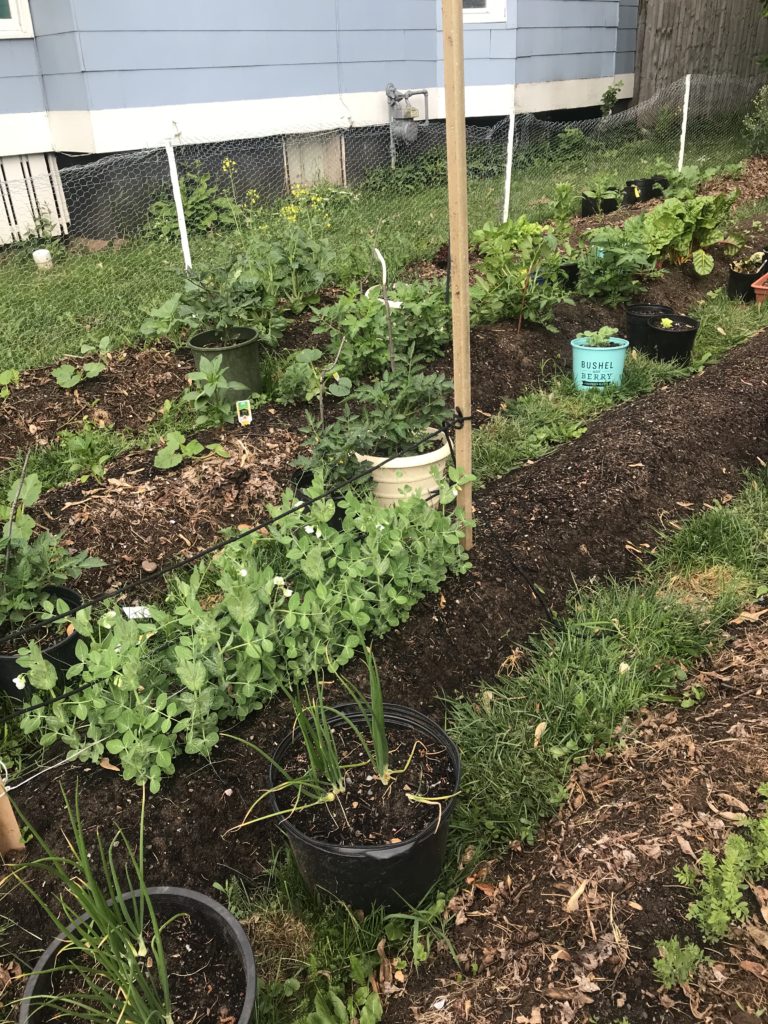 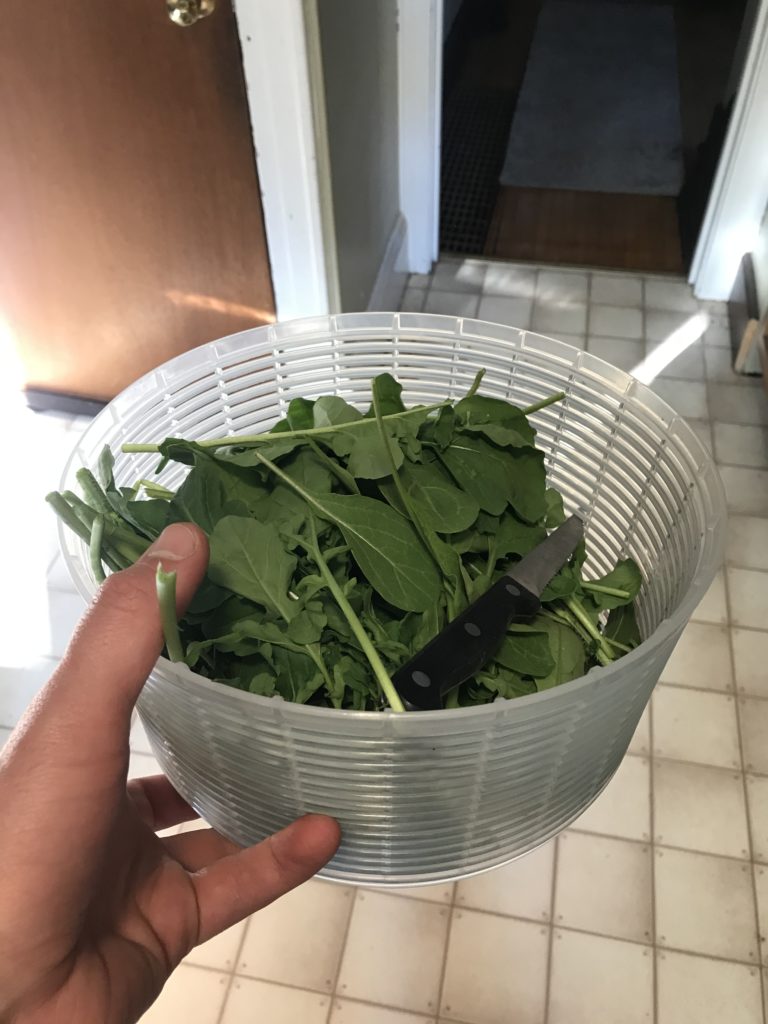 Let’s see… I want to journal as much as I can but there is a lot going on! Let’s start with seeding then.

After over three weeks, my mesclun mix, taking over an entire half row, hasn’t sprouted. Not a one. Very frustrating. So I put down a varied mix. I think I didn’t keep the top layer of soil evenly moist enough… so I tried something highly experimental and laid down some brown paper from a shipment a couple months ago. I laid it down, wet the paper, poked holes for seeds and kind of just shoved seeds in the holes. Looking at the nearly mature greens, I tried to strategically sow the seeds in the most bio-intensive way I could. I really hope they come up in a big even layer of tasty greens. I don’t know if the paper mulch will work… We will see. I think if I more carefully put soil over the top, I may have more luck. But also, if I can keep this paper wet I know the seeds will be moist enough. Plus, hopefully this can cut down on weeds. From the back to half-way to the front, in the second row, I sowed seeds:

I don’t know if these will sprout, either. Again, highly experimental.

One more bit of seed I put down was carrots in a blank spot in the regular carrot row.

I put down mulch on the long side by row one. The grass and weeds are getting a little hard to manage and I wish I didn’t have grass in between the planting rows. I think just having that grass in the middle is hurting my anti-weeds campaign.

Otherwise, things are growing really, really well. Last week was quite cold, which helped my greens. I harvested a bunch of arugula, some spinach and some rainbow chard. I think the arugula and spinach will be good to harvest completely any time. Then what? Get more seeds in the ground I guess. I think I harvested around $10 worth of greens. I want to keep an ongoing tab of how much value I can pull from my plot, knowing that I spent around $1,200 this year to get it up and going. Er, up and growing!

Side note: quite a bit of the rainbow chard has blight on it, and definitely more than a couple spinach leaves have brown spots. Hmm. Don’t know how to cut down on that. Especially the chard. THey’re almost like soggy brown/grey spots. Ish. 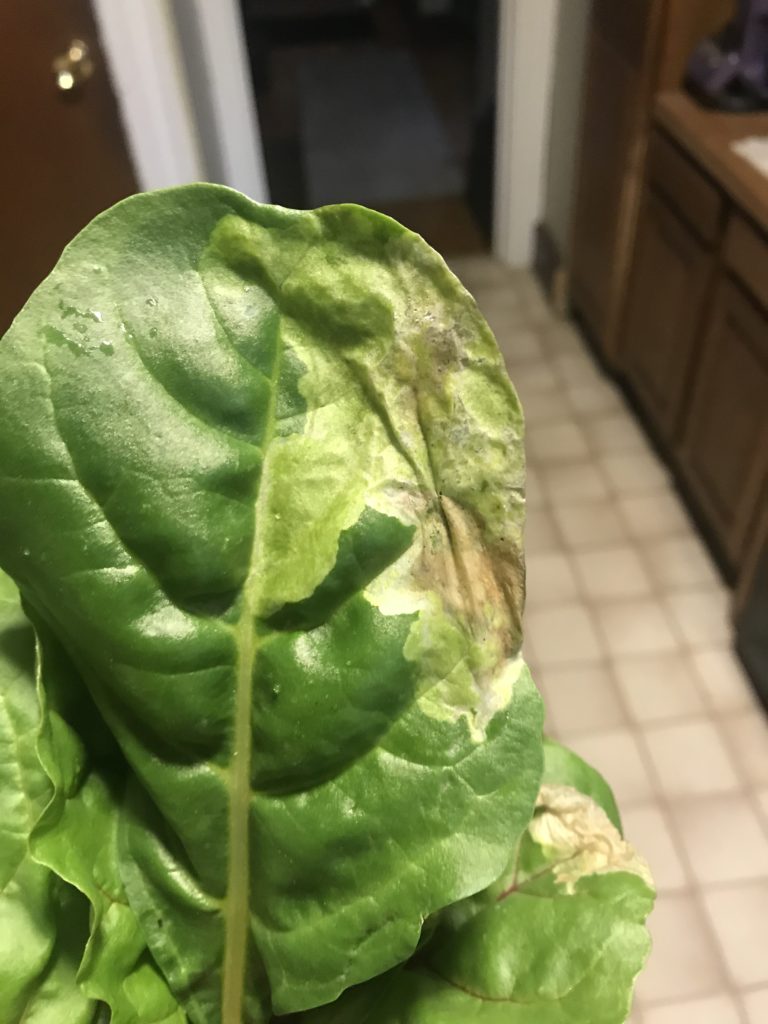 Hmm what is that blight? 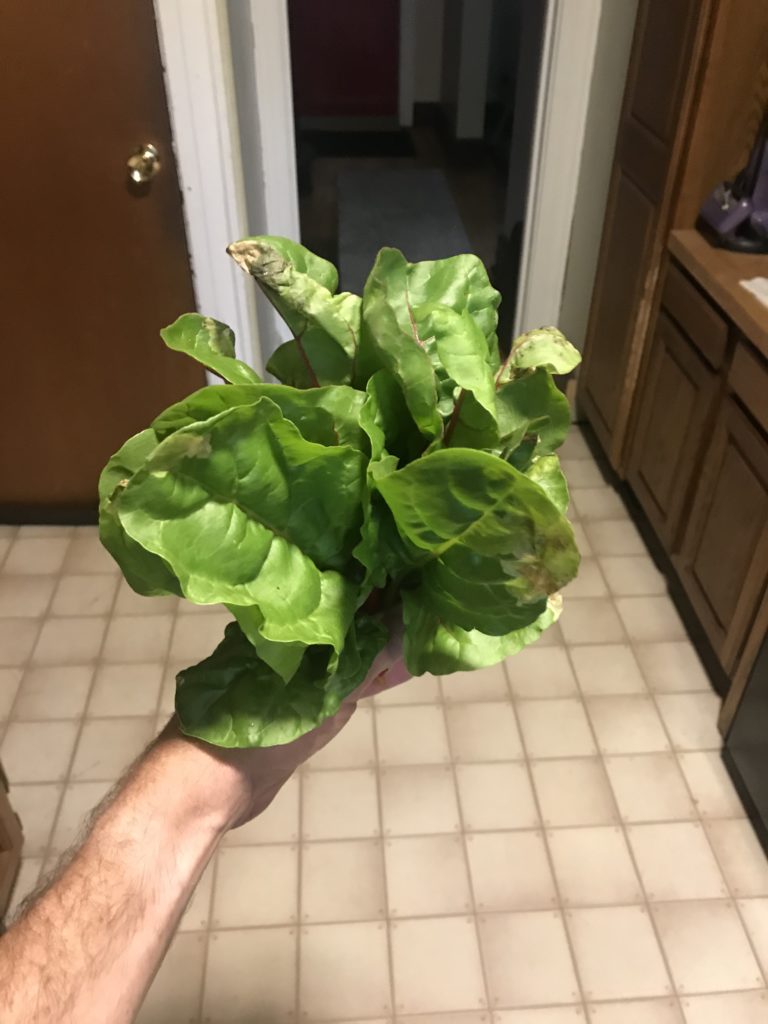 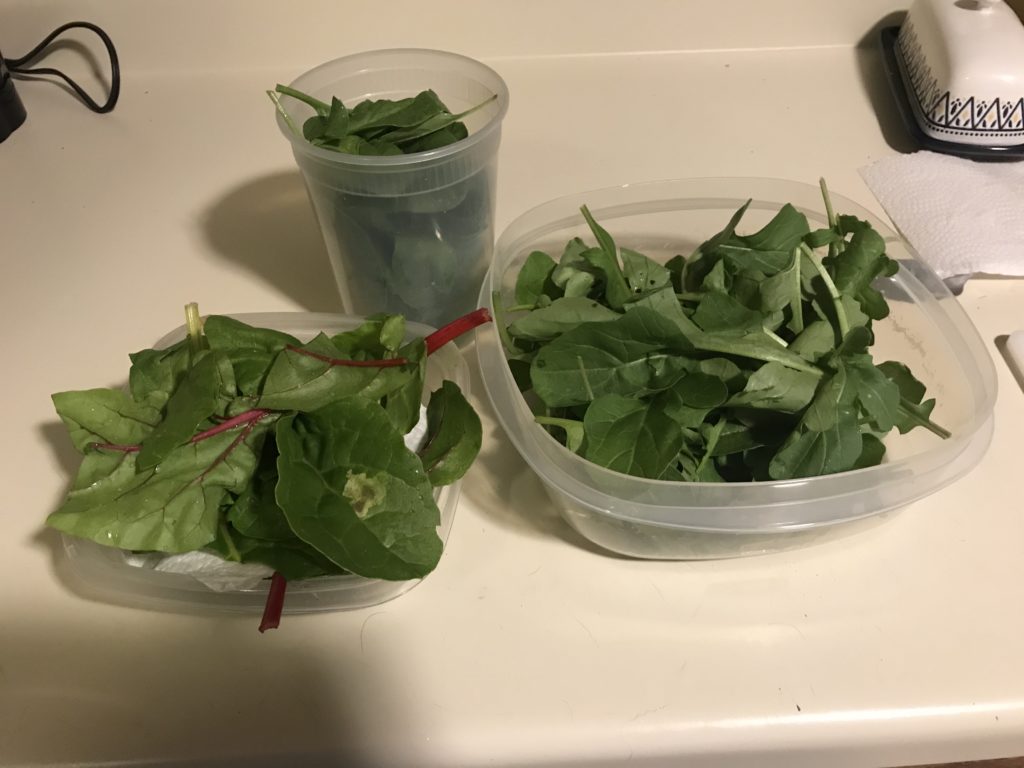 The first harvest more than a little here a little there. Maybe one or two clamshells worth… 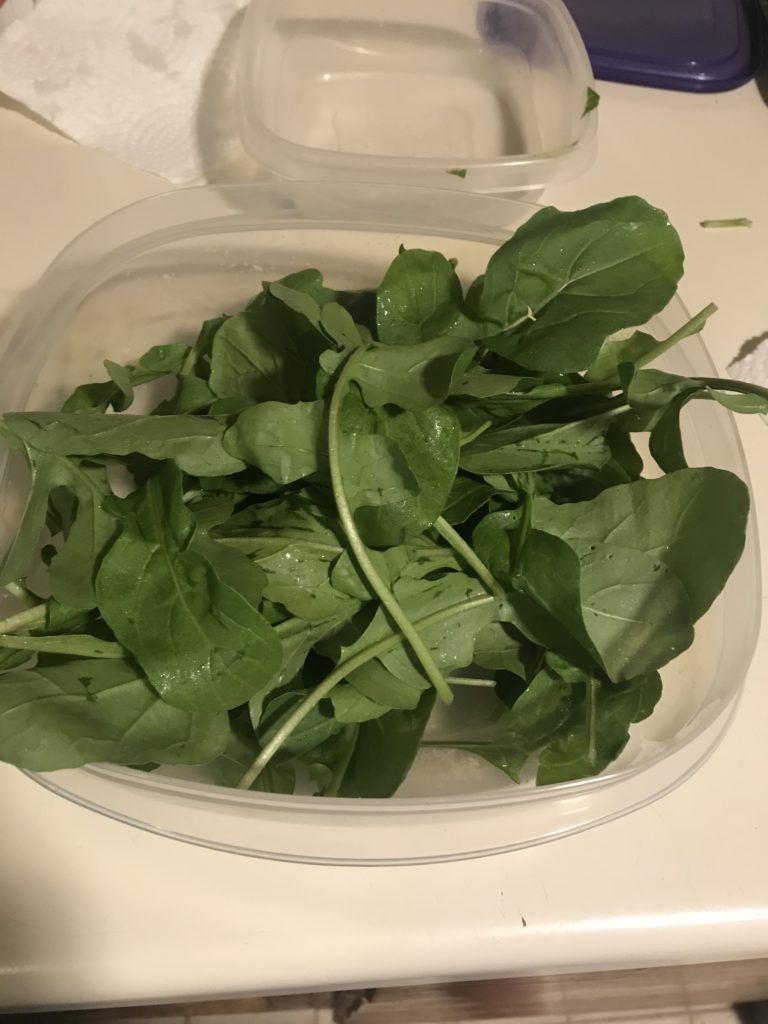 Arugula coming up big, and probably ready to harvest it all.

Otherwise, everything is looking good. Herbs are not growing at all, which is frustrating. Well, basil is sprouting in the ground and in a container. I am super, super excited to see cilantro growing in a container as well. No mint, nothing else. Well, maybe something else, but it could be a weed too.

Beans are comin’ along. Quinoa is slow going but growing. I kind of thinned half the row, and might do the other row. Maybe in a few days… they are growing all over each other and I am led to believe that one plan will grow really tall.

Lentils look nice, just getting bushier and bushier. I think the beans and quinoa like the heat and I’m glad to see sustained 70+ degrees all week. Tomatoes are growing, same with peppers. Slowly and surely. Peas are really fun to watch, and they’re coming up really well. Not really climbing yet… I might want to reassess the trellis. Onions are OK, the ones from seed don’t appear to be growing much at all. Kale is doing well. Lots of flowers on the two-year kale plants but haven’t seen any seeds yet. Potatoes are really strong, looking great.

Berries look fine, blackberries have beautiful flowers. Blueberries are a nice little bush, haven’t looked at amending the soil to lower the pH… doesn’t look too bad or like they’re struggling. Strawberries haven’t died but they’re not flourishing! Raspberries are flourishing. I transplanted a bunch to the front yard and those aren’t looking super great.

Finally, my transplanted herbs, started inside, almost died but they’ve become resuscitated for the most part. PHEW. Those are on the front porch and I realllllly hope they start growing soon. A few are sprouting leaves. It’s a start.

Did I post on the indoor setup? I don’t remember. Oh well, that’s good for now. Here are some photos: 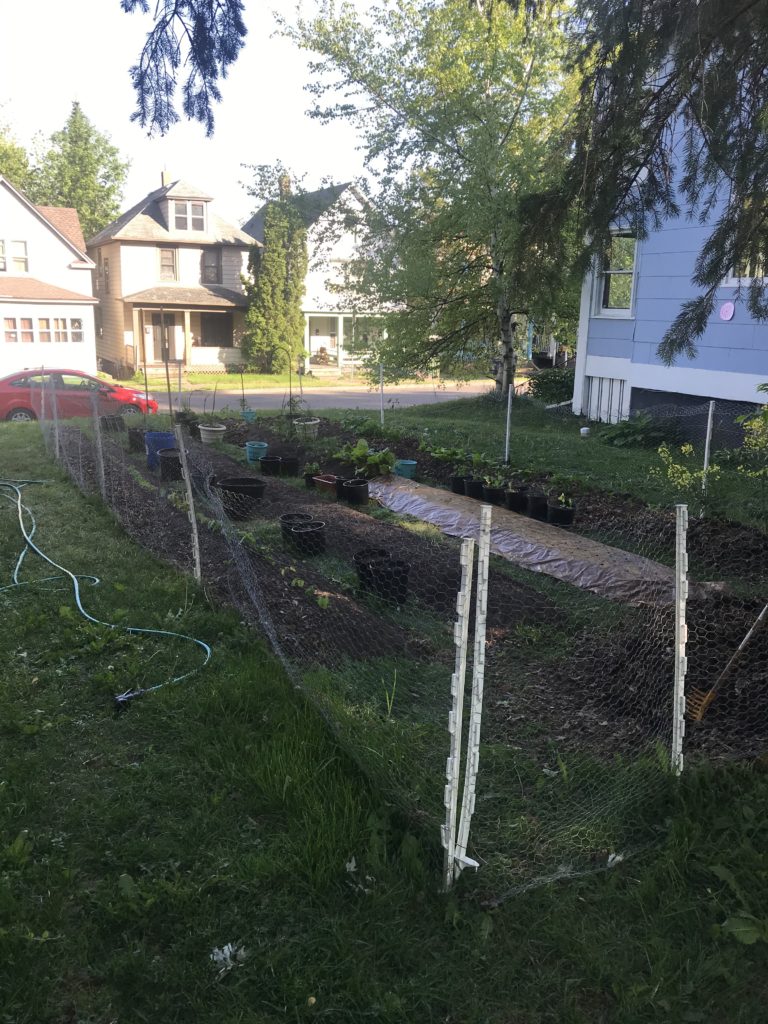 Plot lookin’ nice! Highly experimental brown paper with many many seeds underneath. 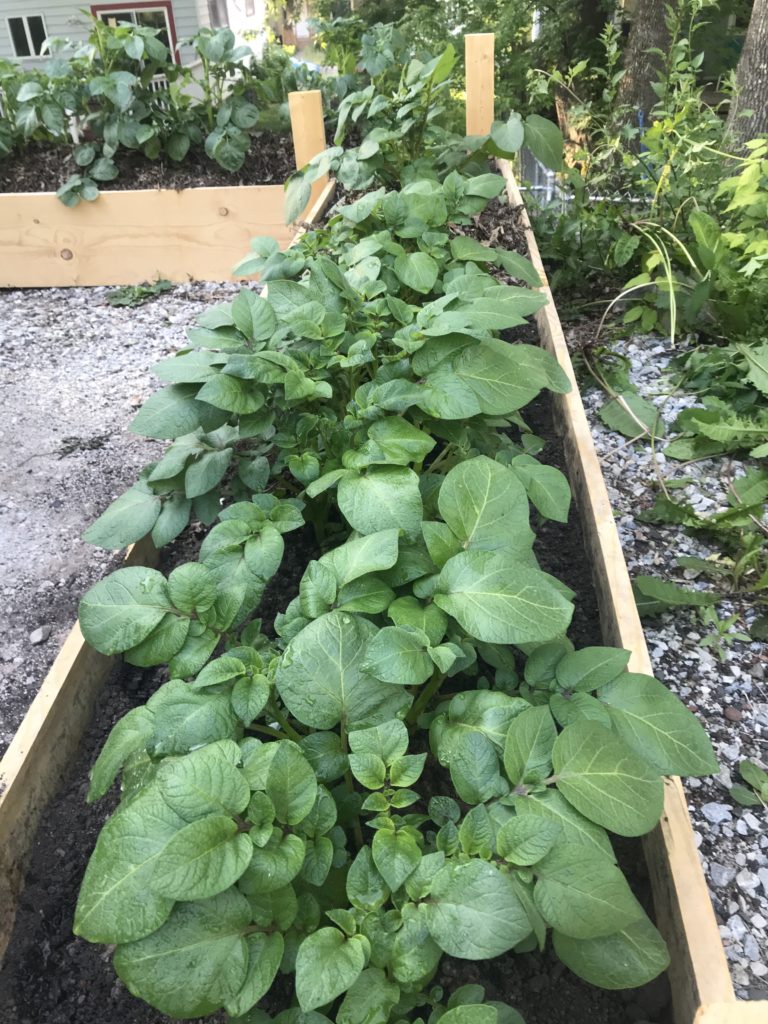 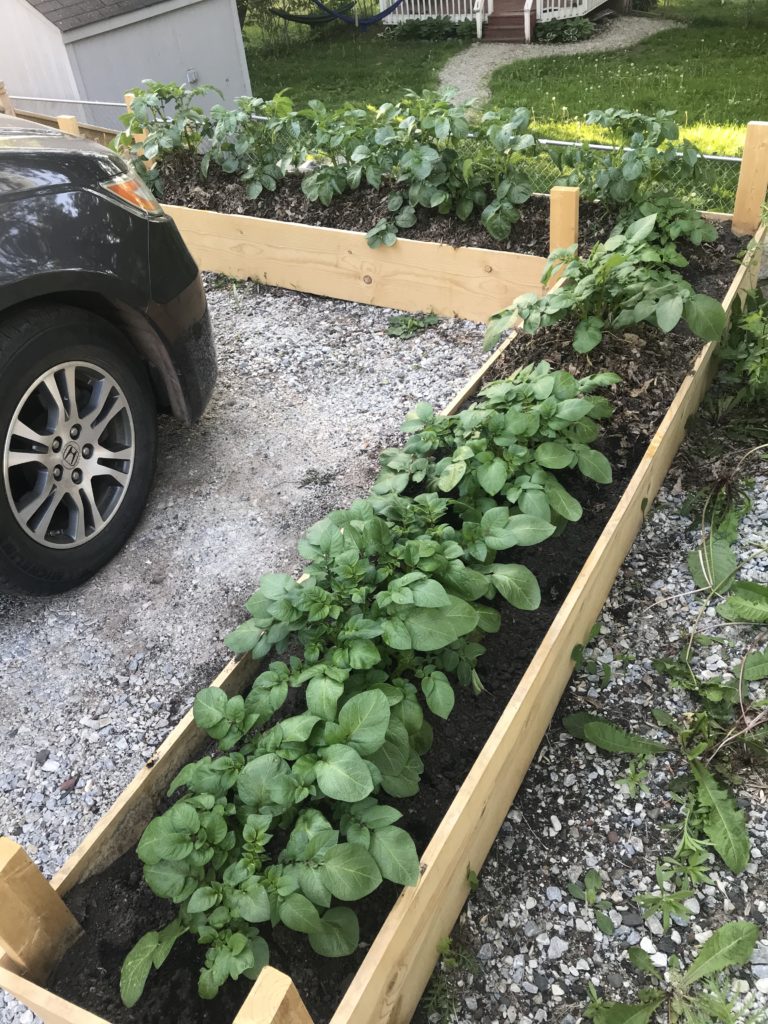 Excellent growth in the back potato box.