I felt somehow calm at the start line, despite the fact that it was really crazy… I was about to begin a really long ski, a ski race in fact, with many others around me, after less than a month of learning and training!? What else but to go for it? One minute at a time… just don’t fall right away. Don’t make a fool out of yourself, Mike. I talked to myself a bit while the anthem was being sung. Immediately after the national anthem, “BANG”, the gun went off and everyone lurched forward.

Looking back a month, I still can’t believe I have classic skis! A bunch of friendly pressures, little pokes, and the fact that this winter was perfect for it, and next thing I know I had some sweet skis and was headed up the shore towards Grand Marais. Kris helped me break in the skis at Sugarbush ski trails, very nearby Oberg Mountain, and the site of some naps and some sleep-deprived running a few months prior while pacing at Superior Fall 100 Mile. Kris gave me some crucial tips right away, and it was a truly exhilarating little jaunt through some beautiful woods as the sun was setting behind trees and faraway ridges. I was so eager to get back out, and that I did! I was able to roll many km’s on my new skis. Time on the skis was the best method to learn, perhaps paired with watching and trying to analyze classic ski technique of Olypmic 50k championship competitors on Youtube. After two or three outings of about 10k, I stopped getting really sore, but was still very nervous about lining up at Vasa until gutting through 30k at Boulder Lake. That one hurt bad, so I was expecting the gauntlet going 42k in Mora.

When the gun went off on a sunny and cold day in Mora, Minnesota, and everyone lurched forward, there wasn’t much I felt I could control except push forward. There was no way to get into a track so I just kind of double poled with the crowd on the flats. Before even crossing the start line, there was a spare set of skis directly ahead and I was able to open my legs to let them pass between. Phew, OK, that was the first obstacle of the day passed with no issue. Bring it on baby! The next obstacle: a 90-degree left turn. Oof, turning hasn’t been my strong suit in skiing. Neither has going down hills, moving in and out of the tracks, staying upright when the tracks end, or anything requiring technical ability. All I had was fitness. Left turn, done. Nice. I eventually got into some tracks, and felt like I lost time just managing the pack. I was sucking wind though, definitely working hard. Perhaps that was just adrenaline. 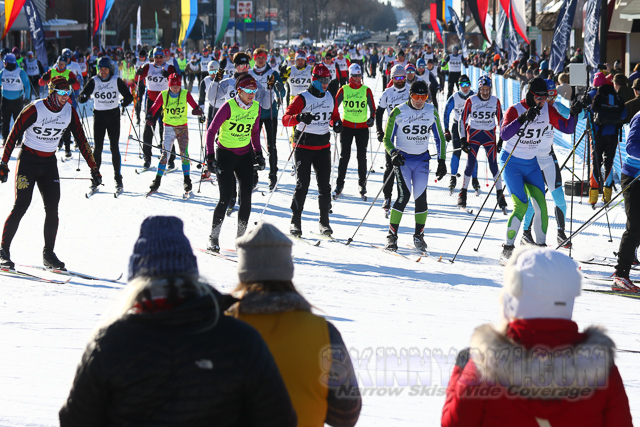 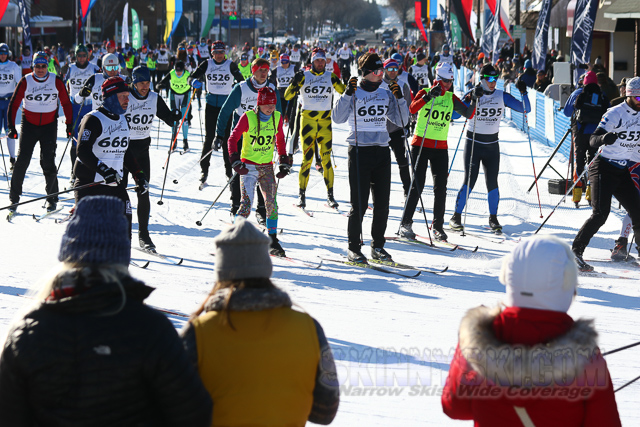 The first few kilometers were equally stressful as the first minute. I didn’t know if I should be in the tracks, and once I got into the tracks they’d end or the trail would turn sharply and the tracks deteriorate. Then I’d almost fall and lose my rhythm and potentially block people. Out of the track, I felt slower, and could only double pole. If I tried to kick, I’d nearly topple over. I definitely fell one or two times within the first half hour or hour. I got right back up… it was mentally relieving to see other people falling all over the place. I told myself it was bound to happen, and to just get back up and keep motoring.

There was a decent amount of uphill and downhill, but no crazy downhills. The trail had a lot of twists and turns, but also some nice open and straight sections. Really, the course was great and had a perfect variation of terrain for me. The sun was shining, and I was feeling good pushing pretty hard. I felt strong, but limited by my technical ability and lack of comfort being on skis and having poles attached to my hands. I knew this was a fact as other skiers around me would spread out from me on tight curves and downhills. My watch said 9 miles after what seemed like no time at all, and I figured I’d be at the loop point before long. Nice. Feeling pretty good. I was going back and forth with a couple people that I started to recognize. Then I’d fall down, get all tangled up, not be able to get back up, step on my pole, get super frustrated. Then I’d get passed by a guy I passed long before. Then I’d get stuck behind that guy in the tracks, not knowing if I should pass. After a minute, I’d get sick of sitting back and jumped out of the track, fall back a bit, only to double pole like mad to barely catch up to the person and not even make a pass. Ugh. That scenario replayed itself several times.

I had one gel and a few sips of gatorade on that first loop. Hot gatorade, that was something new! Mmm, very delicious. I finally got to the turnaround. Time to keep trucking. I was definitely in race mode… kind of just “go go go”. I couldn’t exactly monitor my energy stores to see where I was at. I felt pretty good. I also felt like I was getting sore. My right thumb was the most sore of anything. My pole was rubbing weird, or I was gripping weird or something. I didn’t give much time to remedy the situation. I wasn’t really actually sore anywhere else. Maybe abs and back, but I was double poling and feeling good. Kind of a general soreness, but that’s expected after an hour or two of hard exercise. Across the first lake, and I felt fastest by striding. The double pole kick was OK, double poling felt slowest and least efficient, actually, and striding just felt good and sustainable.

Around the bend, over the lake and I remembered to look at my watch for a rough split. It read 1:33. NICE. I was jacked up. If I held this pace, which I felt I totally could, I’d be at sub-3 hours. That’d be crazy! I was thinking 3 hours, or more realistically 3 and a half hours as a finish time. Nice… keep pushin’ Mike. I talked myself up and was feeling really good as I could now envision the finish line. I knew the whole course now, and it wasn’t so bad. There wasn’t really any concerning spots. A few tricky corners, a few little hills, but not too bad. Let’s go baby.

The second lap was immediately kind of different. I felt like I was in no man’s land. This happens to me at every race! There were plenty of skate skiers around, but it was just me and the tracks and all of the classic race seemed to be spread out. That was kind of nice. At least I didn’t have to navigate other skiers. I came across a few people here and there and seemed to be able to get around them with ease. One by one I tried to pick people off. I was super motivated by going under 3 hours and wanted to do so by leaving it all on the race course. Then, each classic skier that I saw ahead was a new goal, a new person to rein in. I ate an exercise waffle I brought, and planned to eat my last gel for a final boost with 10 or 15k to go. The waffle was frustrating to eat as well… dealing with the wrappers was impossible. I need to figure out something else with food. I drank another sip of gatorade at the next station and zoomed on. I fell a couple more times, the last of which being so frustrating as I was feeling in the zone! I felt a sense of urgency, like every second counted. And I couldn’t untangle myself from my self. My legs got all crossed, arms crossed, then I started swearing and getting frustrated. I popped back up and pushed hard to get back in the track. I was pretty much equally double poling, kick double pole and striding. Push and push and push. I skipped the last two aid stations, and kept picking classic skiers off. I felt like I was making really good time, and that jacked me up.

When I zipped through the last aid station, and knew I had about 8k to go. That would go by like nothing, and I knew now was my last chance to try and shave time. No way I would let things slip now! But there were a few moments when I felt completely drained. Like my arms and legs were giving out. It was mental stamina that allowed me to keep pushing. My friend Eric was racing the 50k skate, and before the race as I expressed my fears and concerns, he told me that I knew how to suffer, which was a big component of ski racing.

Striding was definitely the only way to go, and I felt it to be the fastest. Especially on the lake coming in to the finish, all I could do was stride out. I tried to pole a little bit just to see, but just felt so much slower, and it was much more strenuous. I just keep moving forward as well as I could. Kick kick kick. Go go go. I had pretty much been at a threshold effort for nearly three hours. I was ready to be done.

A few skaters came up beside me as I struggled to ascend the last hill. I chose to stride out on the finish stretch into town, way to the left in the tracks. I even told a skate skier next to me that I was done striding, for life. I got a laugh out of him. Oof, yes I was tired out. But I pushed hard after the last turn into the finish line, exactly where we’d started hours ago, hopping out of the tracks and resorting to double poling into the finish. It was brutal. I saw my mom right before the finish, and also saw coolers of drink beyond the finish line. My sights were set. I crossed the line and stopped moving. I was totally beat. Oof is right. I kind of slinked to the ground as my mom caught up me and started talking to me from the sidelines. I couldn’t really hear, I just had to unclip my skiw. My body was almost tremoring from the difficult and sustained effort. That was a shock to the system. I eventually stood up, took my ski poles off and tried to collect my skis and stuff. I felt like my biceps were about to cramp. But I was alive and well! The post-finish endorphins were for sure hitting hard. 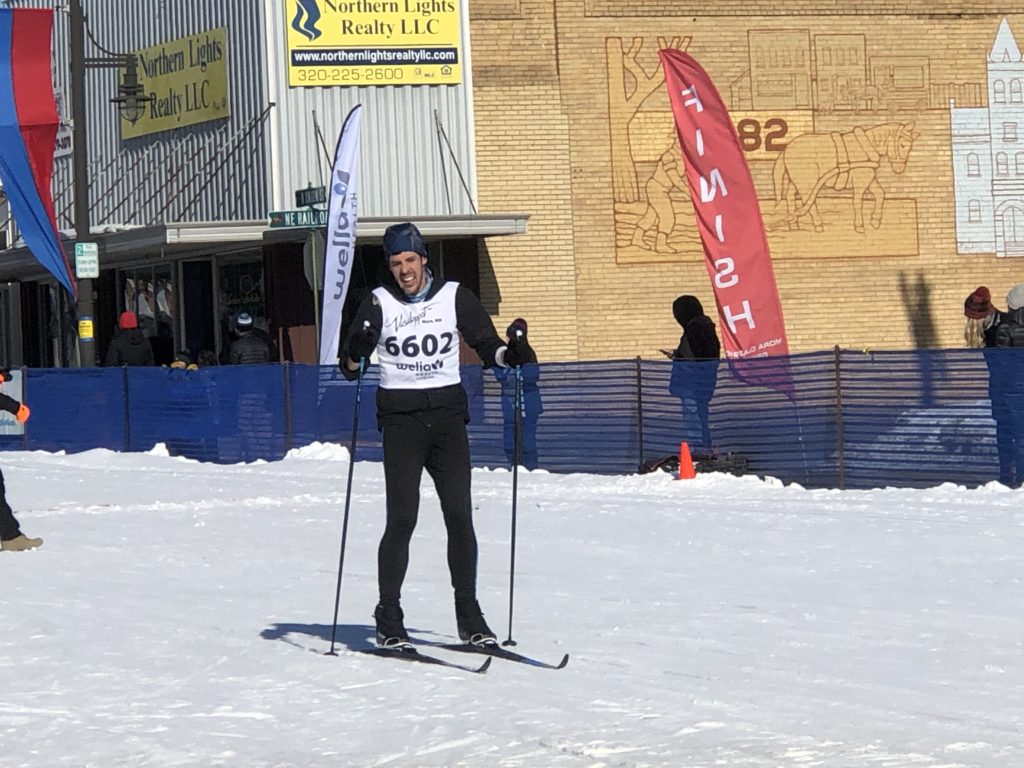 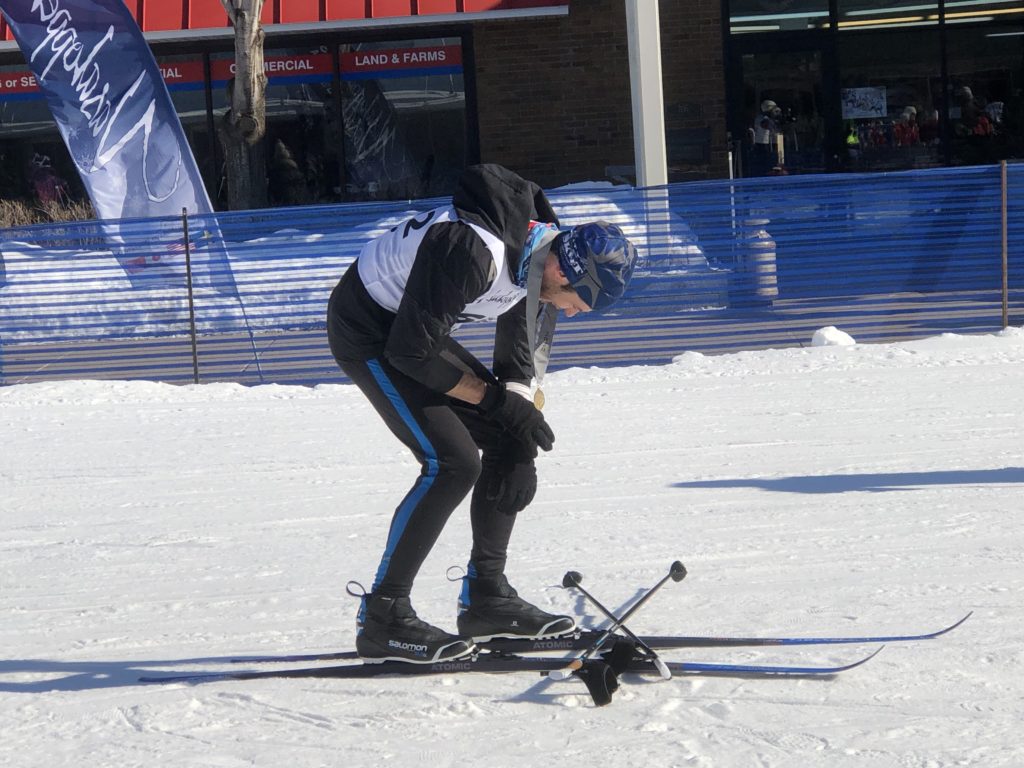 My mom had retrieved my dog Diamond, who I’d left in the cold car. I was afraid she’d freeze solid despite my coat and her dog bed, so it was a relief to see her as well. I went straight to the drink coolers. Mmm. I was depleted of calories for sure, and drank some blueberry soup, hot gatorade, ate a bunch of oreo cookies, and had a couple cups of hot cocoa. Oh yeah, that hit the spot. I was dead. What fun. I will definitely be back ski racing. I have a lot to learn, and I can really recoup some free time lost just from bumbling around out there. But on that day, I gave it all I got. And that is what racing is all about! 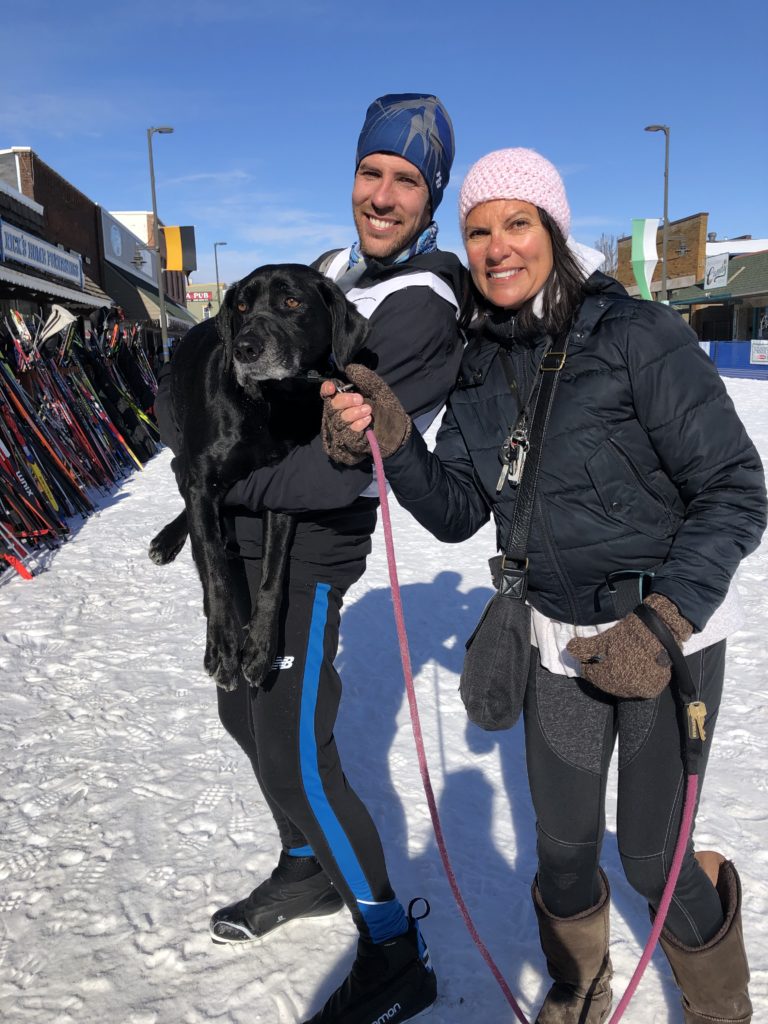