There was excitement at the start line for the four hour loop race. I don’t think many people had done a fixed time winter trail run before. It was my birthday. I think that might have been a first for me, too, racing on my birthday. Either way, from the first step after the “GO!” through a bullhorn, my brain was in a different mode. Well, different from the mindset of: seek and destroy. I had been on a winning rip and earlier in the week, earlier in the month, earlier in the year, I thought I could win. I also looked forward to duking it out with Chris Rubesch, with whom I have duked it out with many, many times. And every time it is gritty and so fun. I saw Matt Eidenschink before the start and discovered he’d registered the night before. Ooo, that was a curveball! Matt is a freak.

So when we took off, plenty of testosterone out of the gate, the pack jammed up the first hill and onto the singletrack, and we were moving fast. The first mile was under 7:30 with plenty of people surrounding me. We hit an intersection and I saw an arrow pointing back at us. So I stopped, got pushed in the back, and Chris ran off. I yelled that we’re running the wrong way and the pack immediately turned toward the arrow and back to the correct trail. Chris caught up and was definitely frustrated. I wondered why that arrow was there… the trail must have to come from that way or else why would it be pointing at us? Nobody seemed to be too interested in pondering. We spread out a bit on a snowmobile trail. Still fast. Matt and Chris ran ahead. The pack shifted. Back onto windy singletrack. How long would it take until we memorize the route? I think Ben had said that… The first lap was about 2.8 miles or so, and low 20-something minutes. Yeah… probably not accurate. So at the lap zone, I yelled to the race director Andy asking what we do at the gazebo. He didn’t understand. GAZEBO! I fell behind in this conversation and the pack definitely left me this time. Oh well. So I took the chance to take a pee. And just like that, one loop done, I was definitely in no man’s land once again. I didn’t see a single person around while on my pee break in the middle of the woods.

Now by myself, I settled into a nice pace. My effort seemed pretty even, but definitely slow. I wondered if I’d catch up to Chris and the rest of them. I wondered if I could do 31 miles, an even 50k, 10 laps on the dot, on my 31st birthday. It was such a nice day. Perfect trail, hard packed, fast. The sun was out, warm but not uncomfortable. I ate a gel after an hour. The laps clicked off. Two, three, four. It was pretty quick, though, that my question regarding 31 miles was answered. I fell off that pace after that first lap. I would need five laps by two hours, halfway. No way. My laps were coming in around 30 minutes. That’s pretty slow, I thought. Maybe a bit under… I thought I remembered my goal of a marathon and how I’d have to go 27 minutes per lap. Maybe I didn’t remember that right. I kept trucking, robot-like. 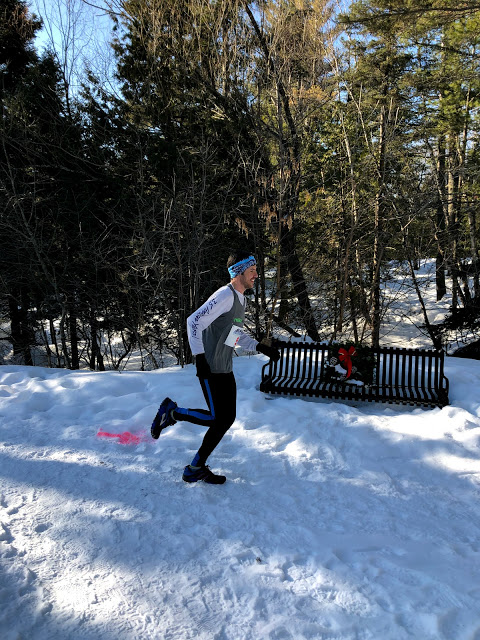 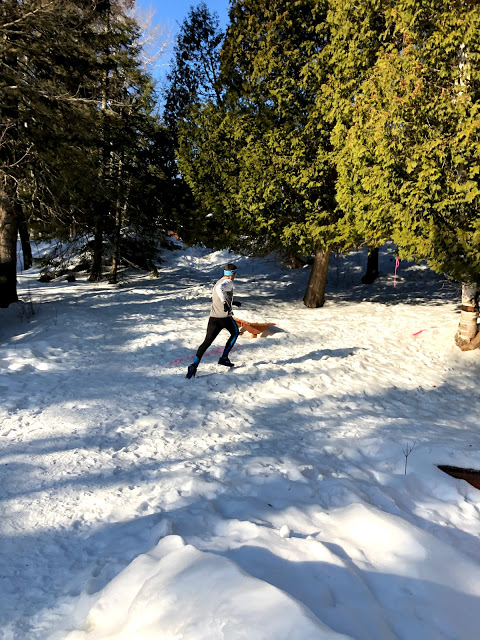 I couldn’t see anyone who was in front of me but plenty of people behind me. It was kind of fun, a little frustrating to pass many others on the course. The trail was holding up great. But there were plenty of twists and turns and I hadn’t seen anyone ahead in a long time. I figured people would start dropping back and I could duke it out with Chris and Matt. I figured Matt was up there, and Chris kind of knows what he’s doing. He is a master pacer, and I tend to explode, so I kind of discounted seeing those dudes. Bleh. Ah, oh well. Then I was passed. Leslie has been on a bigger rip than I, with a long string of wins at the winter series. She passed me with ease and left me in the dust. I couldn’t hang with her for one second. That blew the wind out of me, and I went into survival mode.

Luckily the body was holding up well, so no harm done. I made excuses why I was running slow. I had a weird week. I wasn’t running as much, I took that big break. Camping in the woods. Blah blah. All that did was justify me running slower and slower, and I did definitely slow down in the last couple of loops. I figured that I could do two more loops within the 4 hour limit. I did the second to last loop, then went right back out at about 3:25. That left 35 minutes to get back or the last loop wouldn’t count. If I crank a bit, I could get my marathon goal. Wait, no fricken way. 8 laps is less than 25 miles! Gah. That last lap was an anxious one. I didn’t feel comfortable the whole time. The reality was, the previous laps were at a lower limit of pain. One’s body is going to feel pretty run down after several hours of trail running regardless. The lack of comfort on that last loop was more so with the anxiety of not making the time. I didn’t want to push really hard unless I had to. I wanted to keep some in the tank. But I could also keep going… so I kept my foot on the gas for sure. When I finished that eighth loop with a few minutes to go, I headed straight back out for the 0.5 mile loop with mile markers every tenth of a mile. I painstakingly made it up and on to the top of the sledding hill. I thought I heard Andy counting down but it was kind of muffled. I headed towards the downhill and heard the siren, for sure. I spotted the .4 mile marker ahead. So that means .3 was my last one. I ran it in even though the race was over, totally exhausted, and reported .3 miles. Oof. It was hard to tell what place I was in, but it was at least 5th. Dang. But the day was great, the trail was excellent, the camaraderie was wonderful, and the effort was certainly a positive gain in fitness. What better thing to do on one’s birthday? 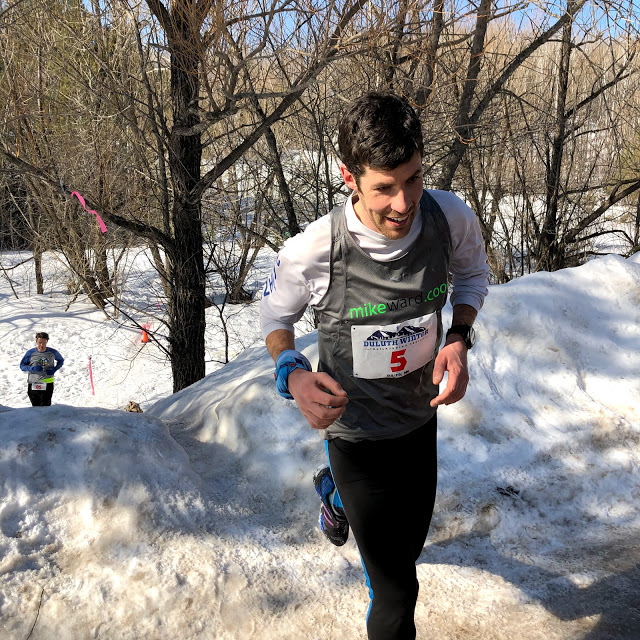