Another Grandma’s weekend is in the books. This is where it all started and Grandma’s and the Gary Bjorkland Half Marathon hold a special place in my heart and my legs. This year, during my second road marathon, I shaved 9 minutes off of my time last year for 2:48. I trained for faster, I can run a road marathon faster, but a huge PR is a huge PR no matter what way you look at it, and I am happy with the results!

A few months ago, I wanted to prioritize my race schedule to get a better perspective on things. That’s the type-A triathlete shining through, I guess! Ironman Madison is first priority, of course, then Chisago half-iron, then Grandma’s, then Buffalo, then scattered smaller races and anything else I can jump into. With two triathlons in front of Grandma’s, I think I maybe skewed my training program a little more bike heavy than run heavy. In the months leading up to Grandma’s, I think I slowly tapered off of running compared to the volume I was putting in in March and April and did a little more biking and swimming. Also, I feel like I edged back from “frinjury” (my hybrid word for being on the fringe of injury), and wanted to feel healthy on the run over being that much more fit. Compared to my training partner Nick, either he got faster or I plateaued off a little bit. Trail racing in early May, anyways, I was a bit closer to him than the early June races. Plateau? Who knows. But looking at the logs, my long runs were spotty and weekly volume was slightly down. Also, I put an emphasis on early season tris… Grandma’s was the third weekend of racing in a row. Did that have any negative effect on my energy levels for a marathon? Hard to say.

I tried a different training plan after reading an article on the internet. Renato Canova trains his elite athletes by having them run real long and fast – “specific endurance”. I thought that this may be a fun, albeit perhaps a little risky, method of training, so I adopted a training program. Based off of last year’s training, I figured if I could do my daily hour jog, plus two hour long run every week, plus speed work in the form of NMTC Wednesday trail race series, then doing four “Canova workouts” would put me on track for a massive PR. Doing some estimation, I figured that I could run a 2:43 if I nailed four Canova workouts, spaced around a month apart, in increasing distances, all at 6:15 pace (race pace for a 2:43). In February, 12 miles at 6:15 pace. In March, 15 miles at 6:15 pace. In April, 18 miles, and in May, I’d do 21 miles at goal pace. Each workout went pretty well. Besides the very first 12 miler, which was right on pace and pretty much perfect, each Canova workout had some minor flubs (off pace slightly, had to poop, dropped out a half mile, bumped the 21 down to 20 miles). However, I recovered from each workout pretty well and felt good about my effort. I felt confident that each Canova workout was setting me up perfectly for a 2:43.

Grandma’s weekend is always hectic. Duluth Running Co. is always super busy, and in the past, it’s all hands on deck at the marathon expo, which we staff from 5-9pm plus all day setup on Thursday, then around 9am-10pm on Friday. Standing all day on the concrete floor is not the best pre-race ritual. It’s always very draining and stressful! This year, though, we put more into the store, and I was at the shop. The hours weren’t much different, but it was a little more laid back and I didn’t feel as drained by the end.

On race morning, I woke up and did the ritual. Mountain Dew, a little foam rolling, a bit of cereal and got everything together. The weather was looking dicey. Thunderstorms, swirling winds, and the occasional downpour was forecasted. It was cloudy as Kyle, Stacie, Nick and I left for the University of Minnesota-Duluth to take the bus out to Two Harbors.

We were joking around on the bus and everybody was ready to race. When we arrived, it was raining. I had a garbage bag on my body and a plastic bag on my head. After dropping my drop bag off, we all stood in line for the bathrooms for a long time. It got very nerve-wracking when with 5 minutes until race time, we were still in line. With about 2 minutes until 7:45, I got my chance and did my business as hastily as possible. Then, I hopped a snow fence and ran in the ditch to get near the front. I started the race in between the 3:15 and 3:05 pace groups… not ideal, but Nick preaches to go slow the first two miles. I wanted to hit 6:15 every single mile.

Weaving through people, I hit my first mile at 6:51. Ok, time to crank it up, I thought. Luckily, while making my way through the crowds, I hit miles 2 and 3 at 6:15 on the nose for each one. Just hold that pace and I’ll be in the cut! Clicking off miles, I was pretty much on track at the 10k mark. My pace was around 6:18 on average, so I went under goal pace for a few and almost equalized the slow first mile. Also, I was feeling good and fresh and had good form. I remember thinking that it was good that I got that 10k done first, and now it’s just 20 more miles to go.

I think it was mile 9 that was a little slow. I don’t know why, but I came in a bit behind after clicking off some great miles up the shore. Onto mile 10, I felt a fart coming on and knew that I could definitely poop. My worst fear, as I had some pooping issues on a lot of long runs and a few of my Canova workouts even. Maybe that’s a diet thing… Either way, I saw a toilet ahead and decided that I could probably poop fast at this point and that if it was empty, I’d go for it. It was, and I did. It was a quick poop, but resulted in a second slower mile in a row. I think I set my poop PR, too, with a sub 60 second dumper.

After the half mark, I got into a nice groove and started to really micromanage the race. Once I get into Lakeside past Brighton Beach, that’s when the race really gets good, I thought. I was clicking off some good fast miles and next thing I know I can see the merger onto London Road. At this point, perhaps mile 18 or 19, I was feeling a little bit sore. Things were starting to crop up, but I felt strong regardless. I know my calves were getting yoked, but my feet were feeling OK and my big muscles like hamstrings a quads were firing off just fine. After I passed Lester River, I started feeling pretty run down. The mental game was kicking in despite a lot more screaming fans. I had to really focus on getting to mile 20, because I knew Angela and a few friends were there watching. After passing 57th Avenue, there was no mile marker. It must be 47th Avenue, I thought. So I was counting the blocks as they went by. 10 blocks later, and I heard a cheering squad and saw the 20th mile marker. It was a huge boost seeing them, but I didn’t know what to do, so I flashed a quick smile and kept running. 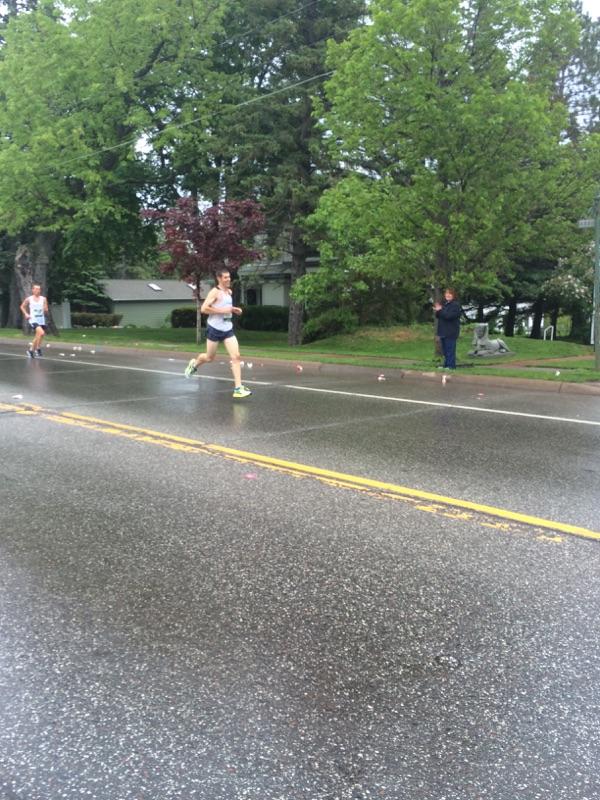 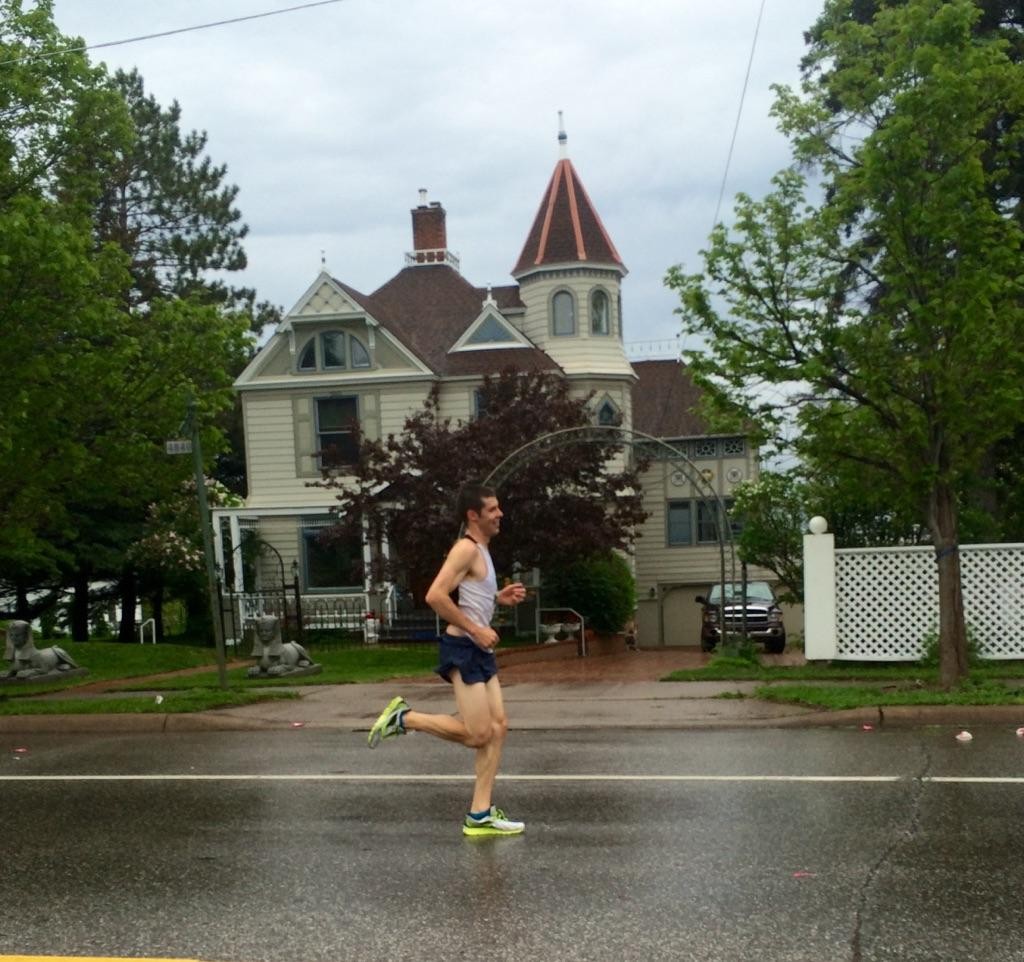 Lakeside, and specifically running past Lakeshore old folks home and Glensheen, has historically been where I start really feeling bad and falling apart. Lakeshore went by with no problems, and then it’s a long straightaway where you can see Lemondrop hill looming in the distance. I was starting to get really tight at this point. Running was becoming labored and I could feel my form deteriorate. Glensheen went by with no problem, but I could feel my pace slip a bit as people passed me. I went slow up Lemondrop, but recovered somewhat quickly and knew that it was all downhill to the finish. Time to wrap it up!

Duluth Running Co. is the best boost because there is always a booming crowd cheering my actual name. That helps. Running down London Road, my mental state was not good. I wasn’t pushing at all and my pace was slipping for sure. I could feel it, too, but didn’t feel like pushing. I scooted up the avenue to Superior Street and ran towards Duluth Running Co. with nice form. You get that hair-stands-on-the-back-of-your-neck feel with the screams and the yells, and that helped for sure. Bring it home, bring it home. My legs hurt. My left one was seizing up, I thought the IT band would flare up, it didn’t really, but I could feel everything being strained to the max.

My right side felt OK, but definitely hurt! I was taking Powerade at every station because I thought I’d cramp up. At Fitgers, mile 24 I believe, I took a little too much Powerade and it sloshed down my throat into my stomach. I could feel it jostling around with my three gels and I got the feeling of throwing up. If I burped, I’d yak. I slowed my pace to avoid embarrassingly throwing up on Superior Street. All of Superior Street was pure pain. I wasn’t even running that hard, but just felt like if I pushed it, I’d probably yak. The feeling subsided at mile 25 as we turned onto 5th Avenue West. I burped and it felt good. So I jetted around some people and ran hard down the avenue and over the bridge. 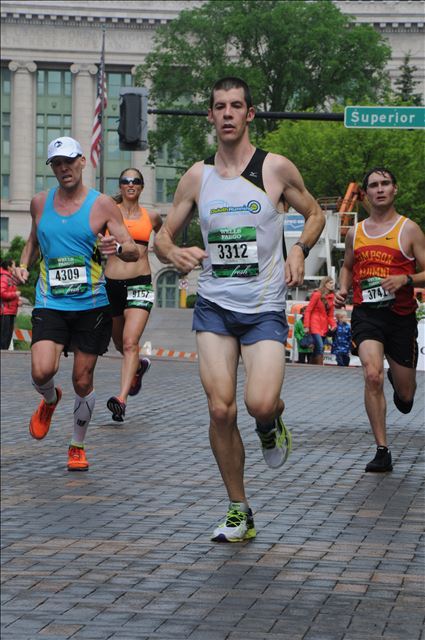 Just bring it home… I looked at my watch and was feeling pretty good about the time, but I never realize how long it takes from the Aquarium. The wind seemed howling right when you turn by the Bay, but it wasn’t bad. I tried to push it and keep my stride nice and strong, but I definitely wasn’t running too fast.

I brought it home on the home stretch… thought I heard my name a few times but kept my eyes focused on the finish line. 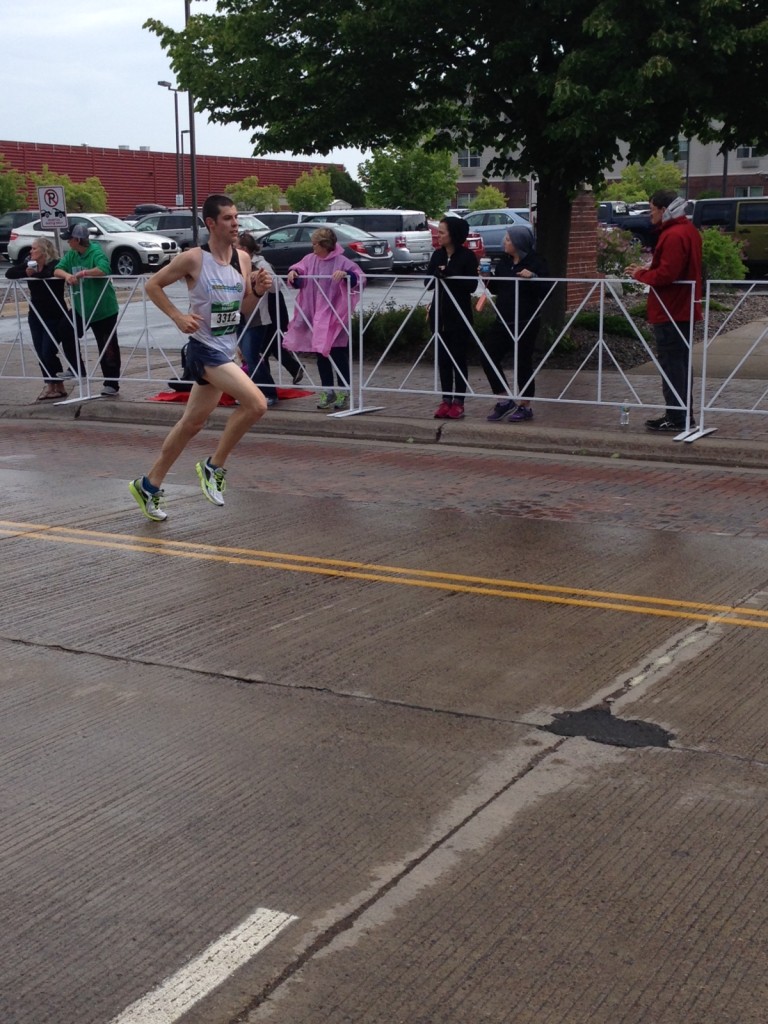 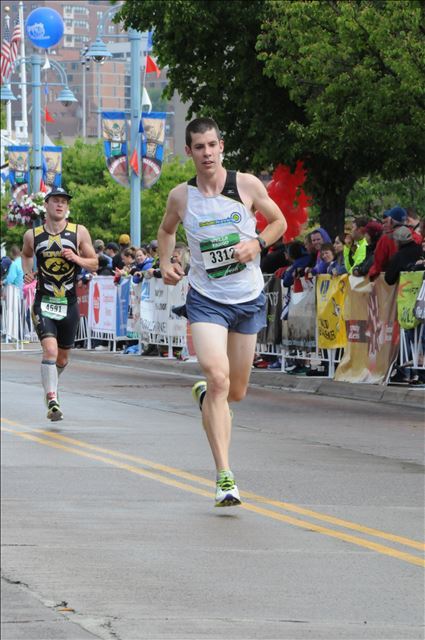 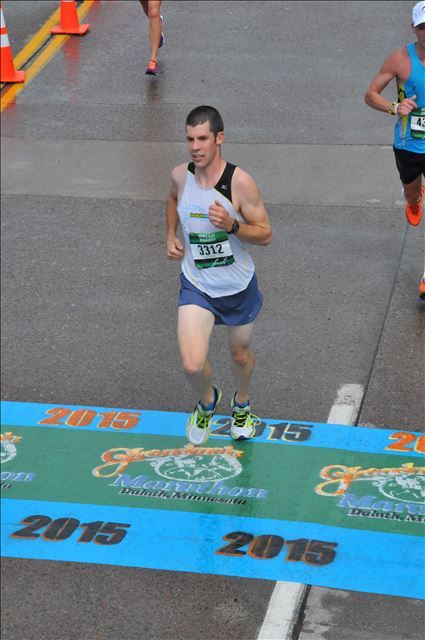 Right when I finished, I did my celebration thing and did a few weird jog strides and kept walking. 2:48:15 was the final chip time.

One year of training yielded a marathon time nine minutes faster, which is awesome. I was less than 5 minutes off of my goal time… around 11 second per mile. The race went pretty much as good as it could have. I don’t think I left much out on the course. A few seconds per mile here and there and maybe I’d be walking down Superior Street. Hard to know. All I’m thinking about now is what sort of a training block should I construct to have the fastest half-ironman time I possibly can. I’ll do Grandma’s Marathon once again next year if I can help it. I think I can run under 2:40.