Lead up to the Capitol City Sprint was pretty basic. I had a strong run week with a lot of intensity, which was good, but I am feeling it now. Especially with Grandma’s Marathon in five days, the plan is to take it really easy in order to feel as fresh as possible on race day. Either way, despite not a lot of volume, it was good to get some relatively hard running in this last week as a little mental boost for Grandma’s.

I put a little less weight on performing at Capitol City just because it was a sprint race and Buffalo was more of a “where am I at” triathlon tester. I already knew kind of where I was at going into Capitol City, and frankly, Grandmas is more on my mind at this point. So the setup and prep was a little less hectic… I wasn’t as stressed out with having all my gear and just generally less stressed.

On race day, I realized that this was a deep field. According to Minnesota Tri News, I knew it was going to be deep, but it hit me on Sunday morning when I saw a few fast runners setting up in transition. Nothing is scarier than a strong runner. I felt really strong and good to go on race morning. I set up transition and went for a little jog. Then, I warmed up on the bike with a time-restricted spin out on the course. It sure was bumpy! Finally, I got into my wetsuit because I wanted to make a point to get a solid swim warmup in, especially because the swim was so short. The water was the perfect temperature and I got a nice swim warmup in. I was ready to go! Little did I know how frantic the swim would ultimately be.

The distances were 500 meters on the swim, 13.3 miles on the bike, then 3.1 miles on the run. I think the run was a little short, however. So, literally a sprint. I was expecting to push a 5k effort for an hour straight. I had little to no race strategy, just crank it out as hard as possible. A small inkling in my mind said to save a little on the bike, but I decided that it was sprint and to go for it all. Also, I had done two run-off-the-bike workouts that week and felt like my muscle memory was coming around and I could hold a decent clip for the 5k. On that Tuesday, Nick and I ran a 5:40 mile (then two easy miles) off of a hard 15 mile ride. That gave me some confidence for sure.

After a quick pre-race meeting, we gathered towards the beach. 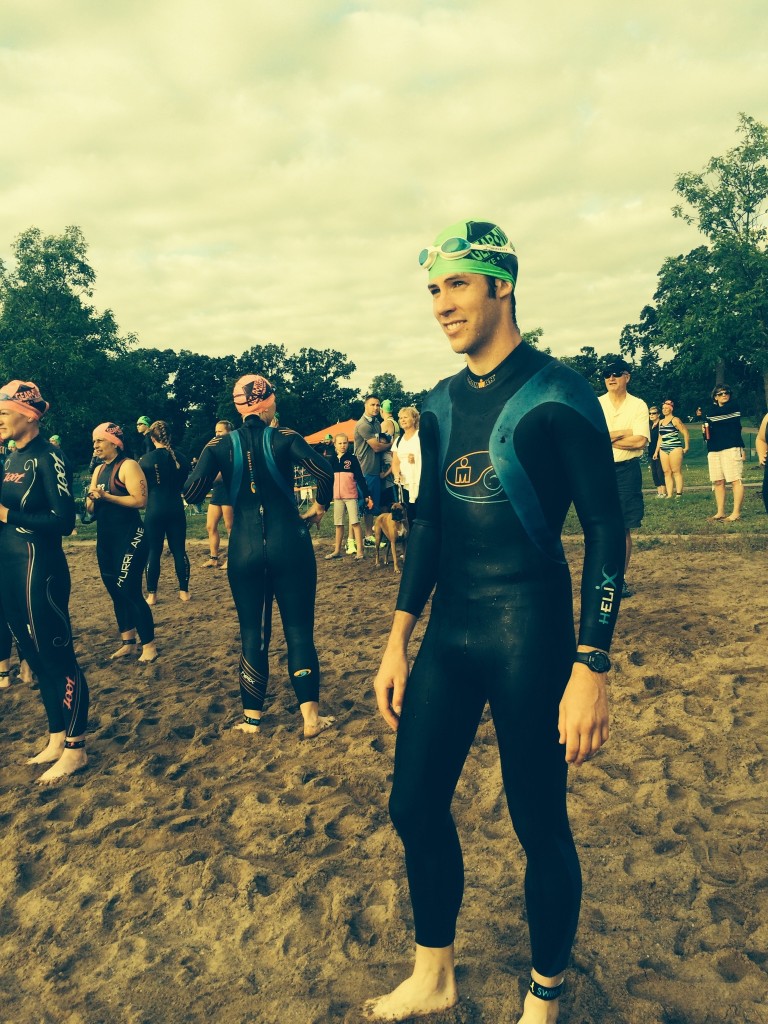 I grouped with a bunch of other Helix-wearing swimmers… the elite pack no doubt. The pre race nerves… and everyone feels it. I was about think about jockeying for position up front and then 6! 5! 4! and the countdown started. Totally caught off guard, I threw my goggles quickly with perfect time to click the start of my watch. And we were off…

A line of guys were in front of me. I thought about dolphin diving to get out in front but there were too many people. I simply waded in the water as people in front of me swam at the same speed forward. Well, I suppose I should dive in, I thought. I dove forward into a sea of flailing bodies. It was congested. People were slapping at my feet, I was hitting people’s hands, I was entangled with someone next to me, break free and hit the person on the other side. How uncontrolled… I tried to look ahead and just swim with the pack like a mindless ocean flounder or something. I was running into people all the way to the first buoy. After that first turn, it seemed to thin out a little bit, so I tried to get into a strong groove. The second buoy was much less hectic, and I wanted to bring it home strong. I focused on engaging my pecs and back muscles.

After a seemingly crummy swim, I exited right behind Brian Sames, a solid bike-runner. This is where I expect to be, I thought to myself. 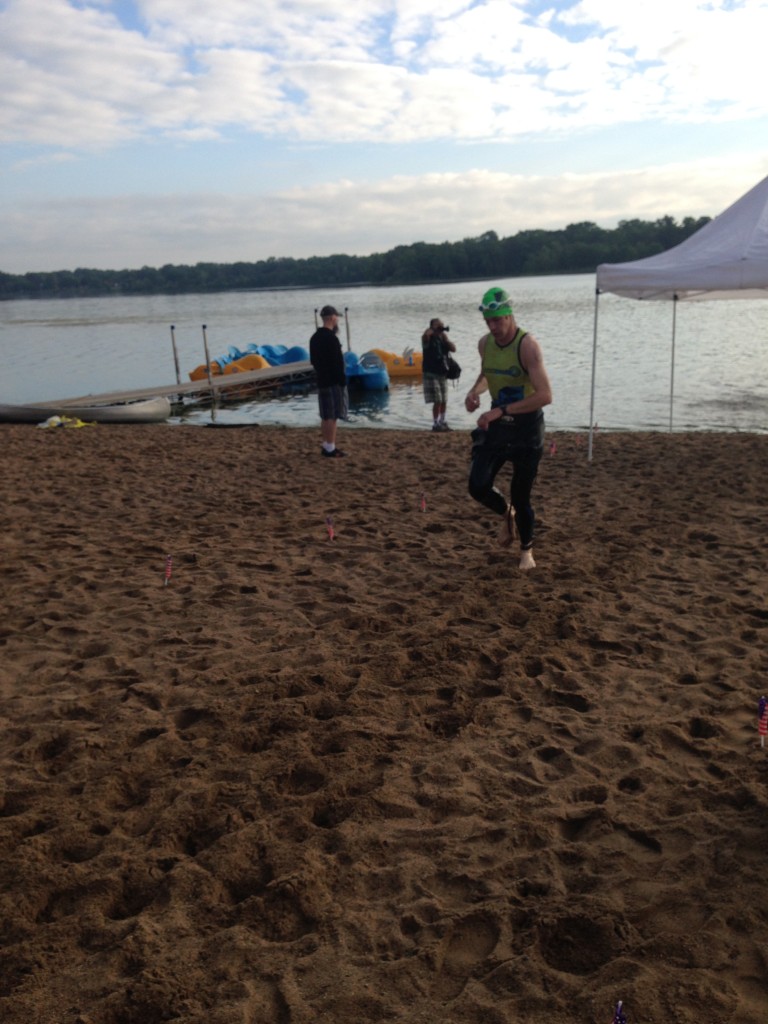 In transition, the wetsuit dismount seemed sloppy and slow. I popped two Shot Bloks into my mouth and took off. The bike mount went well and I started cranking. Brian and a few other guys were taking off, and I’ve been really liking the feeling of roping people in on the bike. I passed Brian and aimed for a dude in orange. Pushing hard, I was coming up on him but definitely didn’t have a super strong surge to pass. Finally, I torched a match or two and passed him. No need, I just wanted to be in front… I later met the guy, Bennett Isabella, who is a solid triathlete, winning a few races already this year, and hot on the du scene. I knew he had raced and Olympic triathlon at Liberty the day before, however, so figured his legs were a bit yoked. A few seconds later, he passed me back. No, I thought, this is a sprint and I need to go all in on the bike or else. 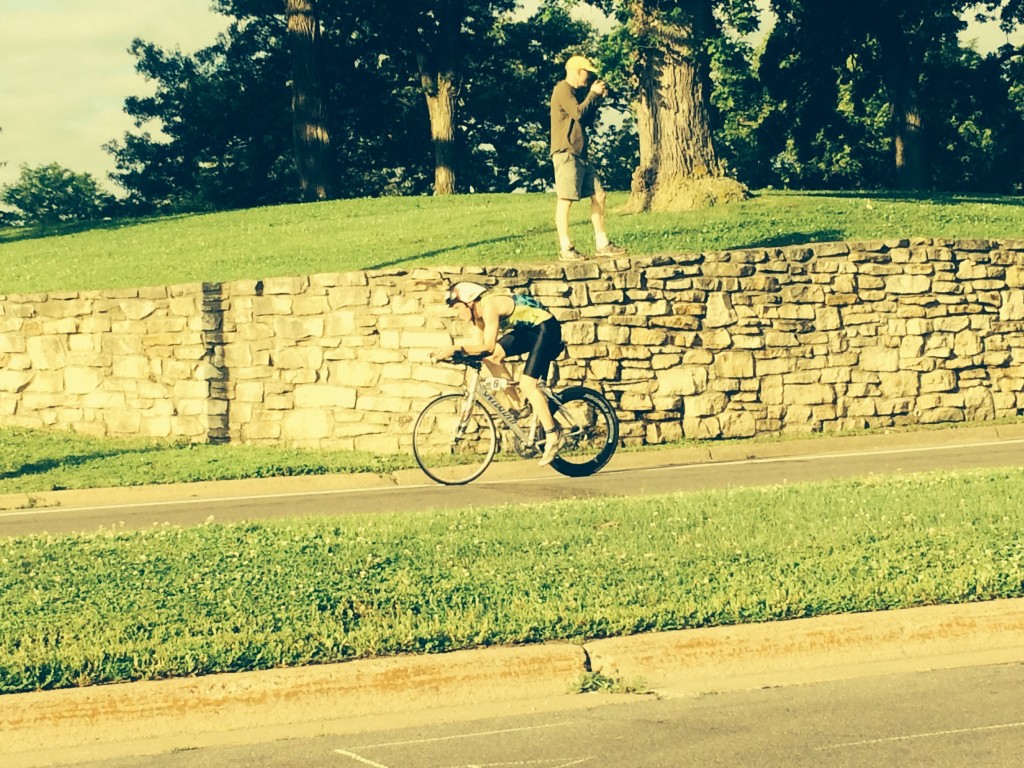 And that’s how the rest of the bike played out. I passed Bennett and neared the turnaround. I saw a big pack of guys a minute or so up, and Matt Payne was already way up there. 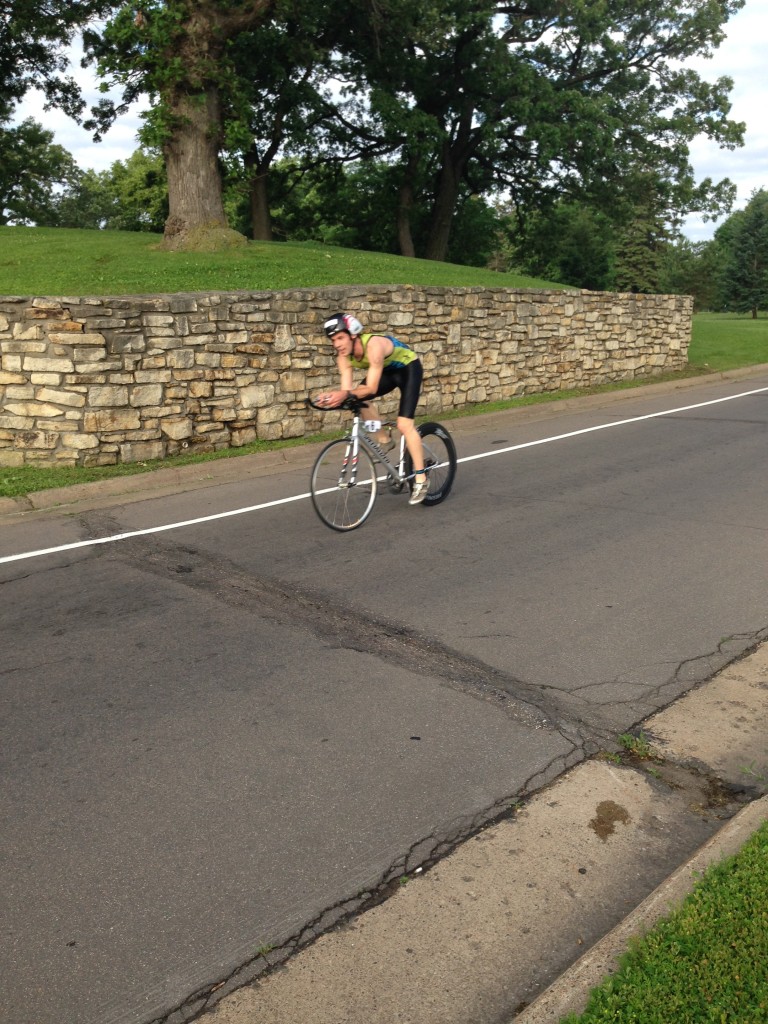 I eventually passed Josh Blankenheim (deja vu), but could see him behind me the rest of the way. On the last home stretch, I know I made up time on this big bike pack up front, and came into T2 essentially on the tail end of the group. I thought that a speedy transition would put me in a good position for the run. 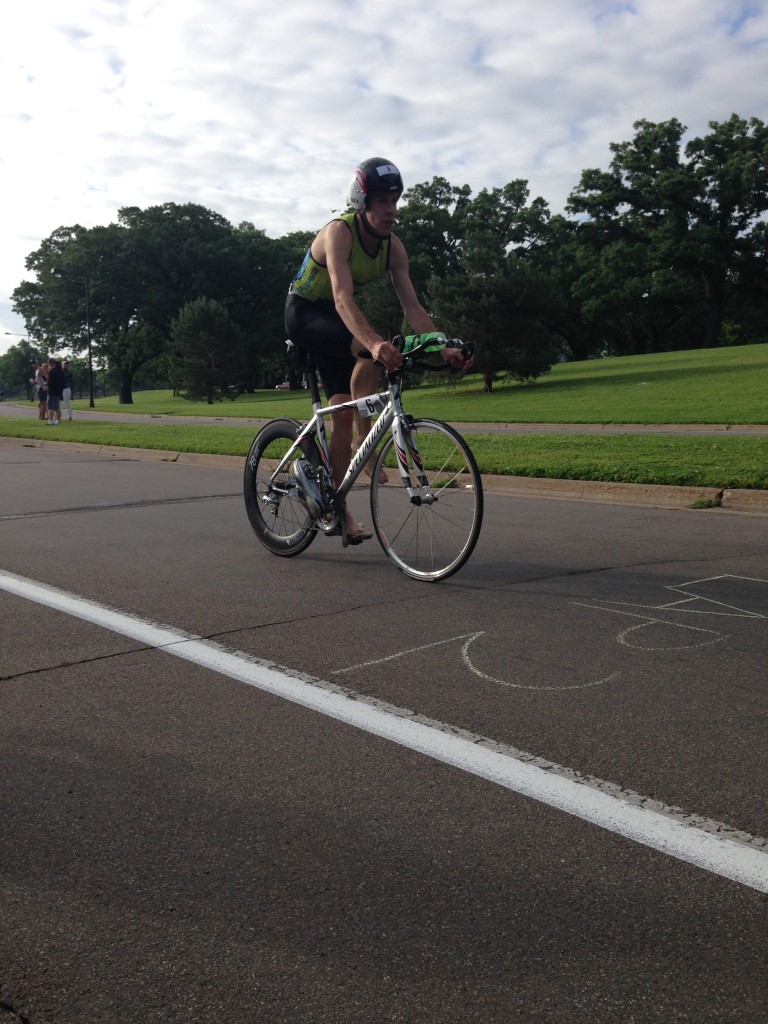 I threw my bike down and switched to the run really fast. I could see three guys in front of me, and I passed two of them within a minute. I recognized Kevin O’Connor ahead of me, and he was running strong. I wondered if I was going to be able to reel him in, but I knew that he raced Liberty Olympic the day before as well, and hoped his legs were yoked, too! With added motivation to run fast, I could tell I was making time on Kevin. Eventually, I made the pass, but he stayed close. With a mile to go, I looked over my shoulder and saw two guys. It better not be Josh, I nervously pondered, but I knew it was. Who else would it be? Is there anyone else running me down? Can I hold these guys off? I was tired, but tried to pick up the leg speed. I was running with a long loping stride and tried to pick up the cadence, but it was too tiring. So I opted for the loping giraffe stride.

Sure enough, Josh came up right on my left shoulder. I said it – “Deja vu” – and when he put a body length in front of me, I responded. He was breathing really heavily, and I tried to control my breathing in hopes that it would be a mental discouragement. We ran side by side for a minute or two, then he made another body length break. I let it go. One body length became 10 feet with the blink of an eye, and Josh ran me down for a second week in a row, but this time within sight of the finish line. It wasn’t a sprint finish by any means, he had it in the bag. I got a dose of reality when I heard footsteps and saw people behind me. Hold on for third, I thought, and I picked it up for the finish line. 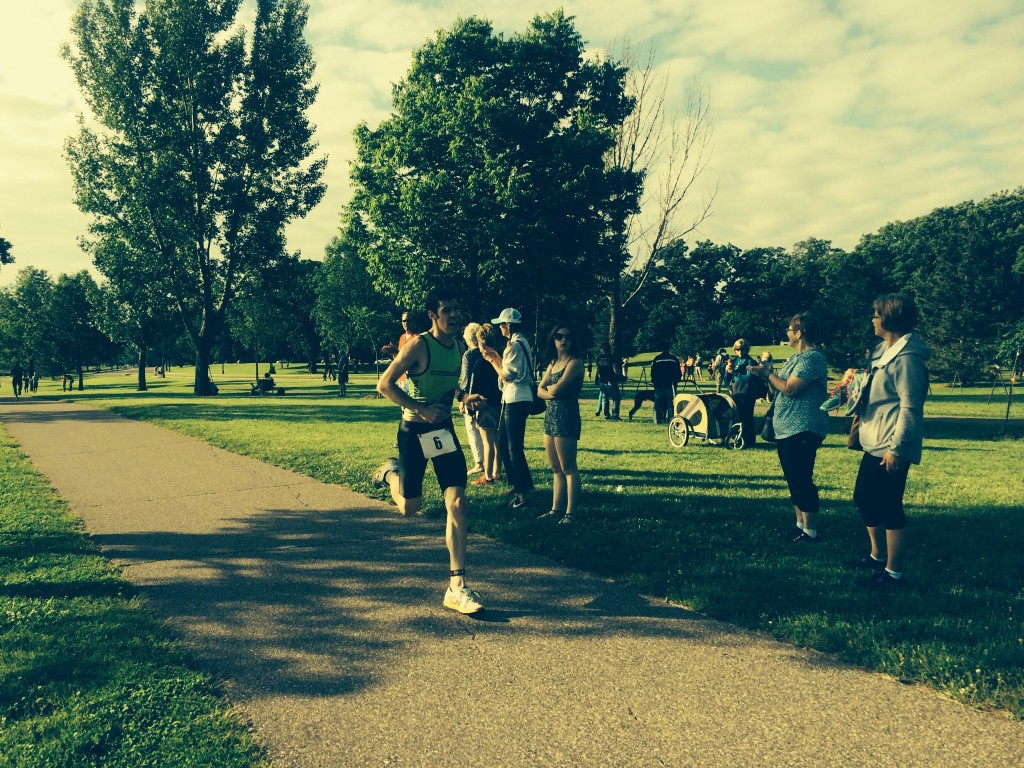 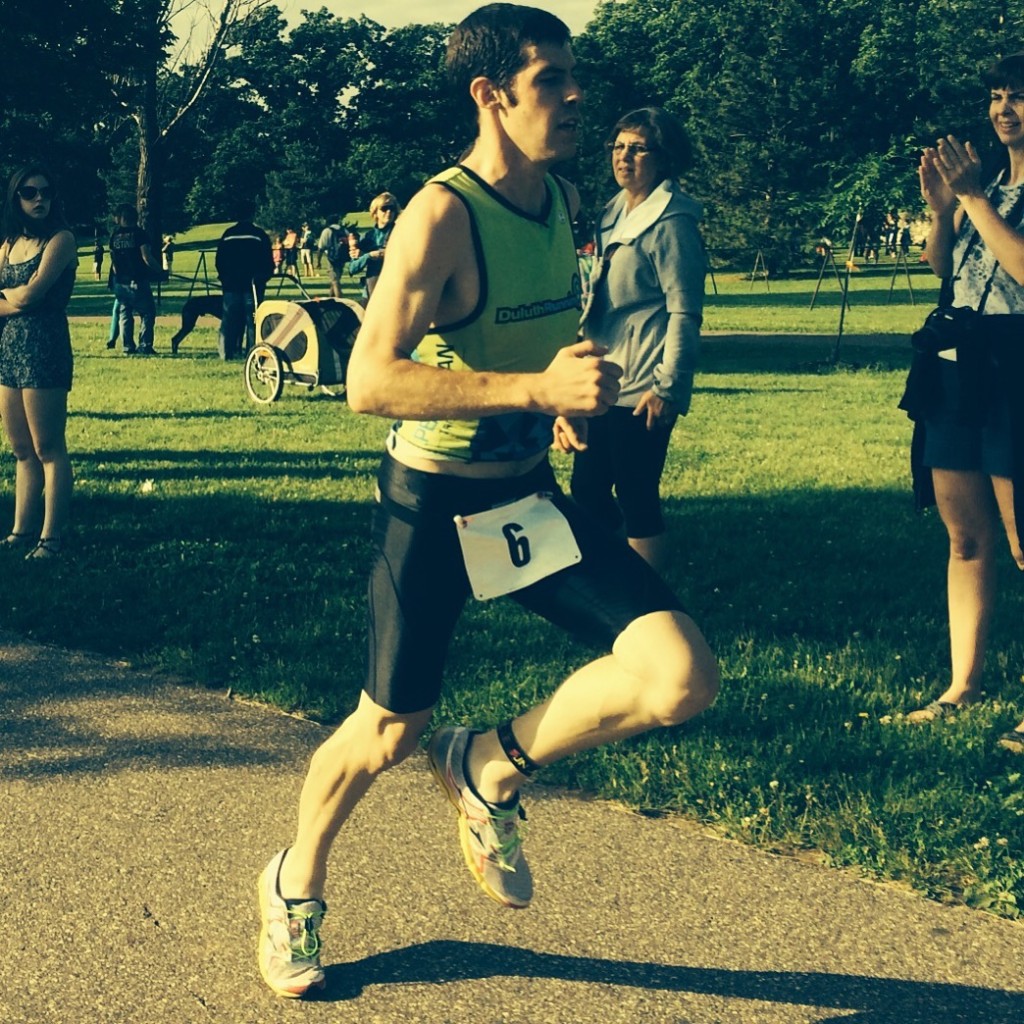 Josh finish four seconds in front of me, yet his run was over 20 seconds faster than mine. Matt Payne came in two minutes faster than Josh, and behind me was a large pack of dudes. 8 people behind me finished within about two minutes of me. That’s a sprint race for you, I guess!

Of course, I congratulated Josh and we joked about the extreme similarities to how Buffalo played out. The race for second and third literally couldn’t have been more similar. Regardless of the crushing overtaking with a half mile or so to go, I was super pleased with third place and didn’t really expect to finish ahead of some of these other guys. And, the race itself was spectacular! The bike course was awesome, run was nice and challenging, and there were some delicious post race morsels.

I realized that racing on the weekends, with taking it easy the day before and race day as well as travel and stuff, I don’t have nearly the same weekly volume, because I can get some nice long workouts in instead of all of the auxiliary race-related time spent. My next triathlon on deck is Chisago Lakes long course. I hope to get some quality long workouts in before then. But of course, only after Grandma’s Marathon!