It was fun to go back to the Garry Bjorklund Half Marathon after running Grandma’s Marathon the past three years (2014, 2015, and 2016). Leading up to the infamous Grandma’s weekend in Duluth, my training was pretty good. I was running faster and stronger than ever, had a huge bank of running volume from the Zumbro ramp-up in March, and had done a pretty nice job of sharpening up and running fast on top of big miles.

I set a 50 mile PR and a 5k PR both in April, but took a few weeks nearly entirely off shortly thereafter with an achilles tendon scare. Luckily, I nipped any injuries at the bud and felt pretty decent with my half marathon training. My workouts, tempo runs (NMTC spring race series), and long runs were consistent and I felt pretty spry on race week. Long ago, my goal was 1:15. I thought I could break 1:15, but barely, while plotting my racing calendar in January. I thought 1:14:59 would be a great goal time, but started to think I had a sub-73 minute run in me. High expectations.

I felt like an idiot going to sleep on Friday night because I had a huge burrito and was really full. Why did I overstuff myself?? I woke up at 4:25am the next morning and nailed my morning routine. Cereal, Mt. Dew, and the bathroom stop was perfectly according to plan. I jogged down to the corner and met Savannah and a few other of her running buddies. We walked to Fitger’s, about a mile from my house, to catch the bus. This was the first time in 9 consecutive years not taking the bus from University of Minnesota-Duluth. I nibbled a few caffeinated jelly beans and drank some Mt. Dew and felt good. Ready to roll.

My legs felt OK once we got to the start line. Maybe a little heavy. I waited in line for the bathrooms and the final step of my pre-race routine was executed. I had plenty of time to find my way to the start line and do some warm ups. With around 7,500 people starting the race, it’s always an anxiety-provoking thought to get caught behind thousands of 2-hour half-marathoners.

It felt like no time before the race organizers corralled us behind the line and got the race start sequence underway. National anthem, equipment check, everyone is lined up, flags up, checking watches, and nervous energy of the fast runners all around me at the front. I could only image the throngs of people behind me. 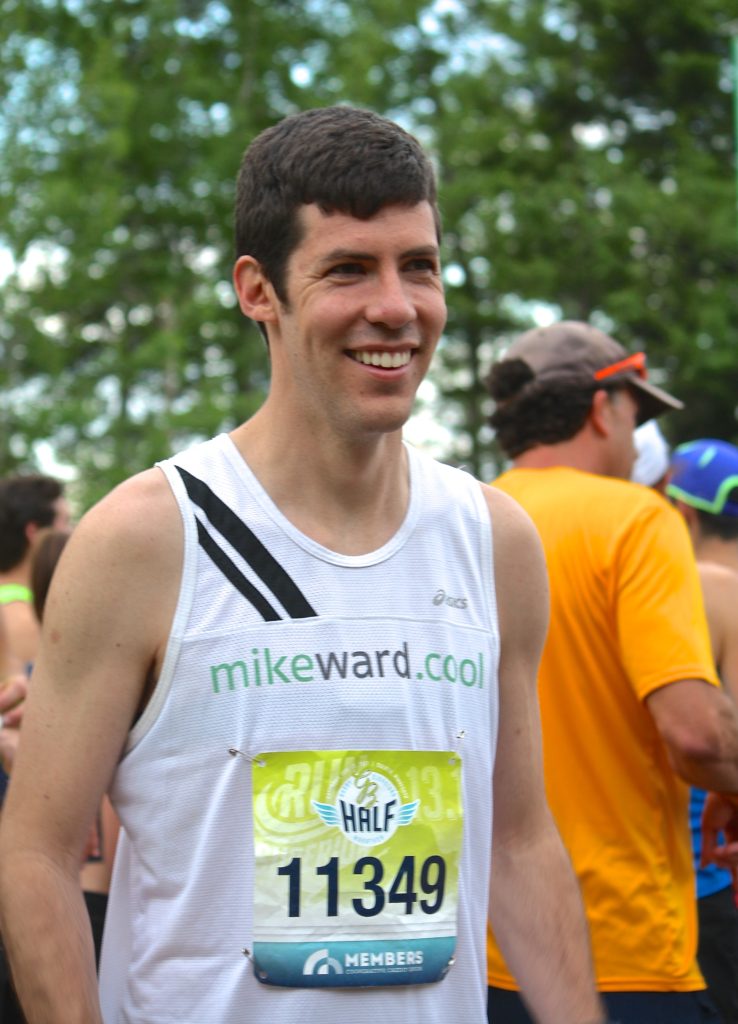 Without further ado, the horns blasted and we were off. I had talked to Gregg before the start and he wanted to go sub-1:15. I had my sights set on Gregg right away. He’s a seasoned racer and knows exactly what to do, so if I could pace off of him I’d probably get my goal.

Otherwise, my pacing strategy was to go out at 5:40-5:45 pace and hope to feel good through mile 6. If the first six miles didn’t feel smooth, I’d have to reassess, but I figured they’d click right off given my fitness level. In training, 5:30’s felt easy to hold for a couple of miles, which is a good sign.

I couldn’t believe how fast the first mile went by. My watch beeped 5:30 and I remembered Savannah saying I’m an idiot if my first mile is the fastest one and there is no way I can do a 5:40 first mile. Well, what does that say about how my race will go, I thought? The second mile seemed to come and go in a flash and I was worried that the race would go by too quickly!

I saw Gregg and passed him. Another local runner, Adam Swank, latched on to my heels. We were with a little pack of people, a few elite women that came and went, but Swank did not waver from his place right beside me. My pace was right on track, in the low 5:40 range, and I was pleased to have a little buffer with the fast first mile. I was doing great mile after mile as they whizzed by until Brighton Beach.

I wasn’t super comfortable, but managing the pace really nicely. I felt a few stomach pangs. Nothing serious, really, but my systems felt a little off. I thought how I have to pee. No, that is a non-factor. Whatever. I have to poop. No, not this in a half marathon… My thoughts were a bit negative as we crossed the Lester River, and Adam ran away from me. Should I stop? Nah. But running was hard and getting slower. I lost my fluid rhythm. I didn’t feel right, to run at my pace was labored and it was because of some general discomfort with my systems. Then, I felt the unquestionable quench of the bowels around 4oth Avenue East, after a couple of slower miles. I still had the buffer, but truly could not decide if I’d be best to stop and get it out. I knew I could do my business quickly, and it would likely make the remaining five or six miles much more comfortable. Or could I gut it out and save the stop? OR would I poop my pants in front of hundreds of spectators on Superior Street and Lake Avenue? I’d have to move away from Duluth and never do Grandma’s again!

My pace slowed further by a few seconds, and I knew I was in the 6:00 per mile range. My legs felt OK, my breathing was fine, but it was some heaviness slowing me down. A heaviness that I could leave in a port-a-pottie. I didn’t know if it would help or hurt, but ate my one gel at the Glensheen Mansion. It went down fine.

I crested Lemon Drop Hill and did a few calculations. 4.1 miles left. I was slowing to about 20 seconds below my race pace. I was maybe 20 seconds down from my goal time of 1:14:59. Gregg had passed me, looking really good with a rock-solid group. I couldn’t latch on.

Lemon Drop Hill felt OK, actually, but I have run and raced enough in my life to know my body. And once you feel “The Clench”, it never gets better, it only gets worse, despite sometimes coming in waves. At 21st Avenue East, I couldn’t focus on the cheering fans everywhere. It was a terrible feeling, and I made the decision to stop at the john. Terrible. How do I have to make an emergency dump stop at a half marathon? At Zumbro 50 mile in March I’d run with less stops!! Crap! 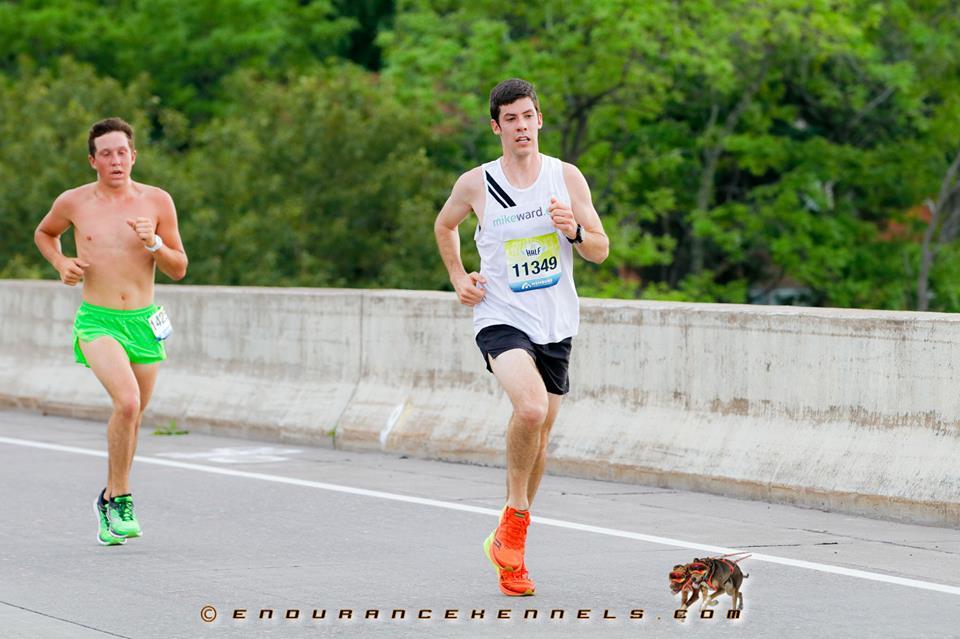 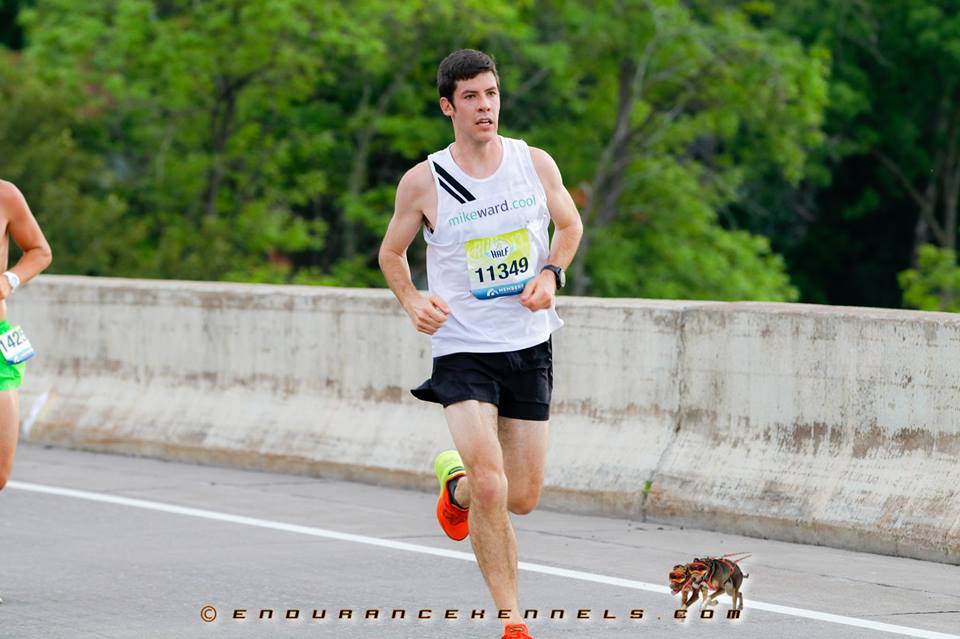 Luckily, it was in and out, and I was determined to let ‘er rip on the final 5k with no mental (or physical) blocks. I sprinted out of the capsule feeling great, and with something to prove. I had to justify and offset the stop.

It was just what I needed to completely change the tone of the race. Shortly thereafter, my watch beeped to signify I was 10 miles into the race. The time it took to run the previous mile was 6:38. A full minute slower than what that mile should have been. Or could have been. That’d take a fast 5k to make it up! I couldn’t do the math, and figured I’d put that mental energy into finishing the race as fast as I could, without questioning what may have happened down that final stretch down Superior Street. With huge volume in my legs, and a decent threshold speed built up, it was time to shred. 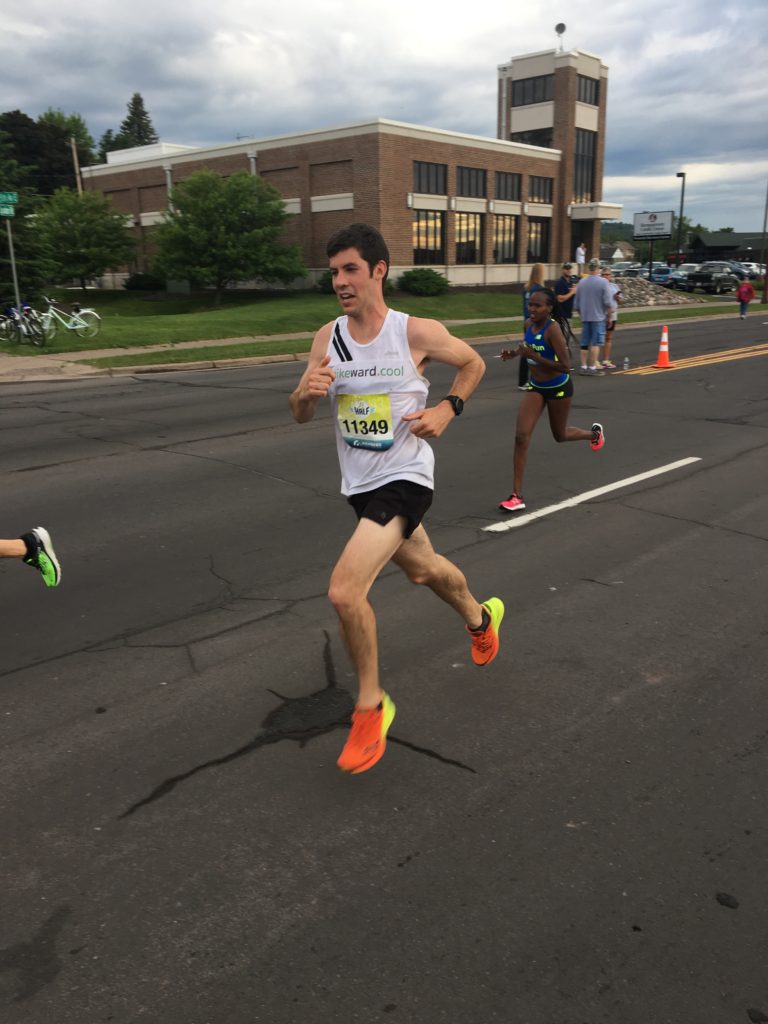 I was finally able to soak in the crowd support, and I felt like I was flying. It was still a bit painful, but I could hold on and felt like I was running at a good clip. My watch’s mile splits confirmed that, and I was back on track with high 5:30’s/low 5:40’s per mile coming into Downtown Duluth. Duluth Running Company is always a welcome boost of adrenaline, and I ripped down that block. All downhill from here, I thought… 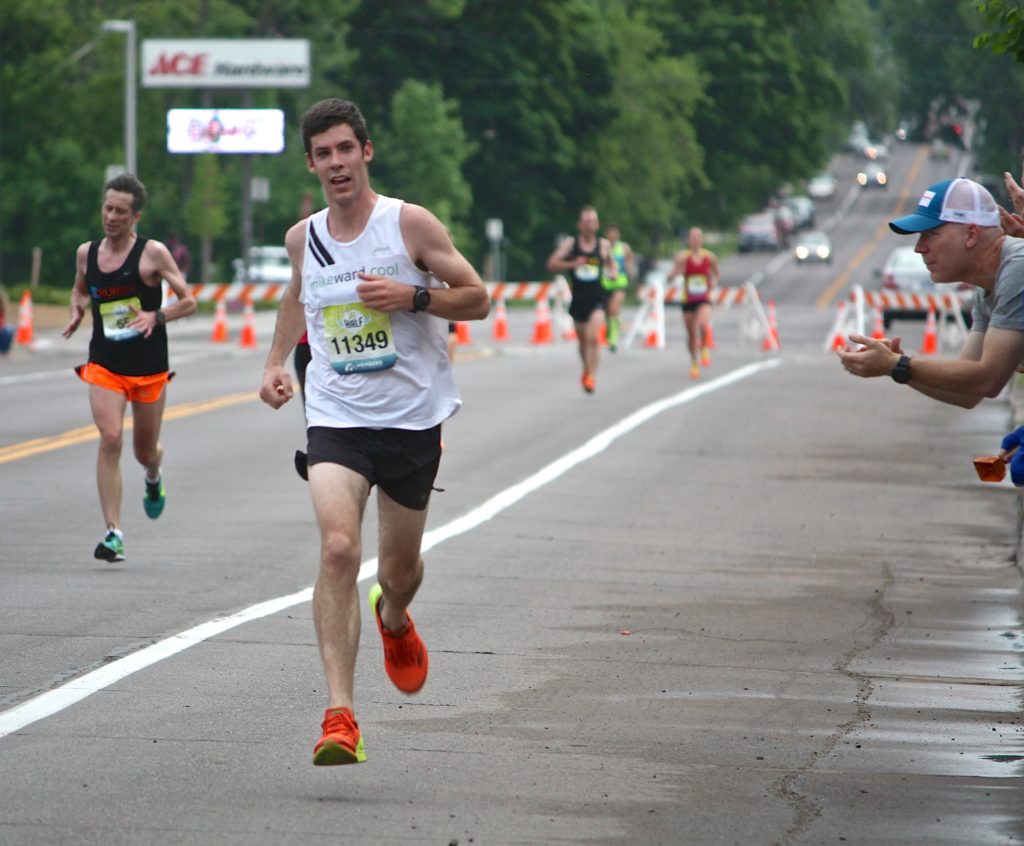 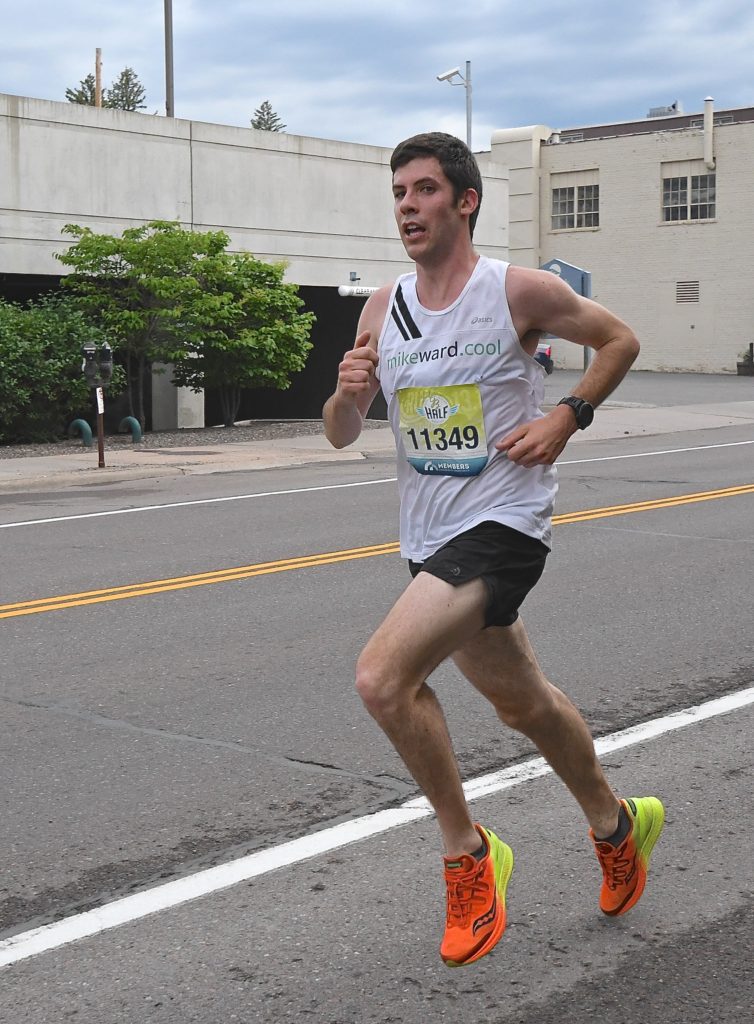 All I could do was hold it together through Lake Avenue, and I was passing people, which fueled the fire. I sped up. I glanced at my watch to see the mileage and time, and did some quick guesstimates. A fine consolation to sub 1:15 would be a finish time IN the 1:15’s, and I was going to be very close. So I picked it up. I bashed my quads on the up-and-down across 5th Avenue West, and passed a couple more struggling elites.

My face started to form a grimace, and my stride lengthened considerably as I dug deep to find higher gear. I remembered the Superior NMTC race where I consciously increased my cadence and pulled away from Nate (who was about to start the marathon at the moment the thought crossed my mind). I tried that method for a second but reverted back to overstriding. It was ugly but who cares. Another glance at my watch and I was disheartened to see that I missed my primary goal of 1:14:59. However, I was past the William A. Irvin and just had a few more seconds of pain left. I was breathing really heavy, and started to feel a drag while running under the Lake Avenue bridge. Around the hotels and the finish line was in sight. One final glance at my watch and I knew I had to kick it in in a major way to at least get a 1:15. I sprinted, my eyes on the clock perched high above the finish line.I knew I was close enough to the start line for that time shown to be accurate.

I passed the announcer line and heard my name. The adrenaline was pumping so hard at this point it would be impossible to slow down. My field of vision narrowed as I lunged across the finish. I remembered to stop my watch shortly after the finish, and and was happy to see 1:15:XX as my run slowed to a jog then to a walk. Good for a solid PR by nearly two minutes, but I hadn’t run a half marathon outright in over two years!

I was pissed as I finished. My immediate emotion was frustration. How could I dump during a stupid hour-long race? Weak! I blame the burrito! No, no, I can’t stay mad at burritos. My frustration changed to happiness and elation as I had a medal hung around my neck, and collected my shirt, beer ticket and chocolate milk. If anything, I was eager to find another half marathon to race soon while I have the fitness. Adam came in in the 1:13’s, and Gregg finished in 1:14:50. Double crap! I knew if I could stick with Gregg, I’d be right on the money. I figured that if I didn’t stop for the e-dump, my pace would have stayed around the 6:00 per mile region and my time would be much worse. Strategically, perhaps it was the right move. But a flub in race execution no doubt. 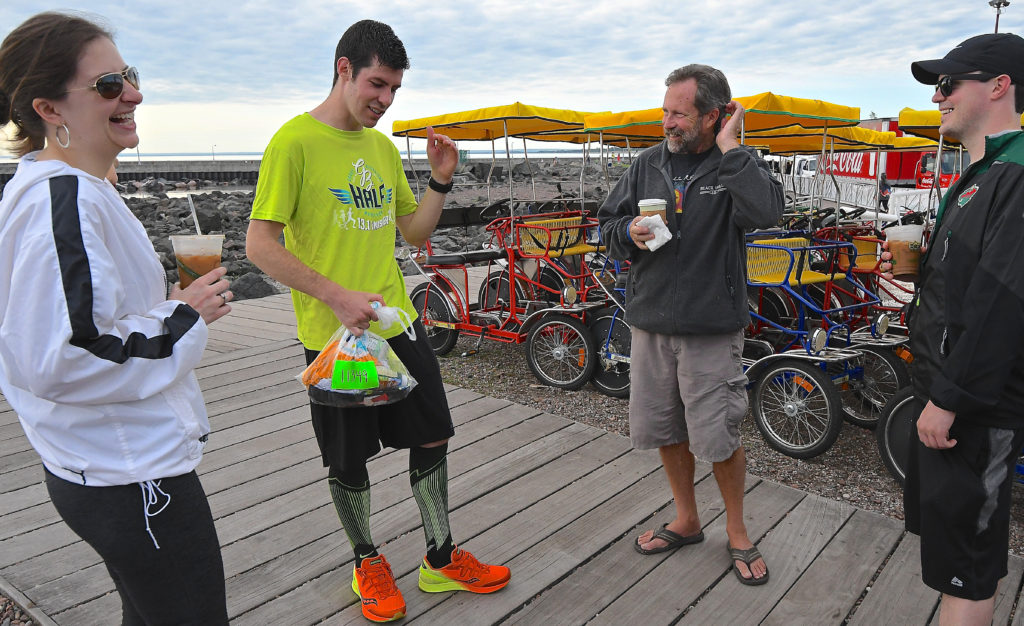 With Grandma’s Weekend over with, I am super excited to revert back to long trail training and racing. I think having a fast half marathon under my belt is a good base to pile trail mileage onto.