I neglected writing about this race for a long time. It was a bad race. I’ve never fallen apart as badly as Wild Duluth 2016. I was undertrained and figured I could wing it. If you don’t put in the miles and race-specific intensity, you cannot wing it.

I did one two-hour run a week before the race, which was my tune-up. I’d been running pretty consistently, but low volume, since the big thru-hike. Three miles per day and one two-hour run. The only reason I signed up is because I thought I could potentially squeak out a win. I mean, I had extreme volume on my legs from a month prior with hiking 50k per day nine days in a row, but that is slow walking, and I was hoping to run over twice as fast for this race. I scoped out the start list and my game plan was to start really easy, hopefully be in the front pack at least, and then race my own race and hold on.

Race morning went off without a hitch. Mountain Dew, check. Cereal, check. Deuce deuce, check. The day was shaping up to be pretty warm. Overcast but in the 60’s. I was feeling good and ready to rip. Talking to other competitors that I recognized, it seemed like everyone was questionable about what sort of shape they were in. But that’s what everyone always says…

I moseyed around and then the hoard started to congregate towards the start line at Fond du Lac park on the outskirts of Duluth. A few words and “GO!”, we were off. I took off absurdly fast for some reason, and my buddy David Dickey stuck right on my shoulder. That’d be a great race, if we could feed off of each other’s energy and push the pace up front. There were a few guys up front with us, but I was in the lead in the very runnable mountain bike trail through Mission Creek. An older guy zipped in front of us about two miles in, apologizing and citing he though he had to go to the bathroom.

I was feeling good through my first five-mile split in the 45-minute range. Right on track… David fell back after the first aid station and I was by myself. A familiar competitor, Ryan Braun, was back behind me somewhere. I saw him on a few switchbacks, and knew that he was pretty fit. He finished shortly behind me at Voyageur 50 Mile and had finished second at Wild Duluth 50k several times. Perhaps this was his year. By the way, I wondered where that other guy was? Maybe we passed him squatting in the woods.

I felt like I was racing well–not too aggressive but not falling behind–until Braun passed me like I was standing still. I considered chasing him but he was out of sight in no time. Dang. I was passed another time, now in fourth place, coming through the second aid station and heading towards Ely’s Peak. Not where I want to be, but I just told myself to race my own race and it will sort itself out.

I pounded it up through Ely’s, and started passing 100k’ers going the other way. That is always a good boost, and I felt good. It was definitely getting warm, though, in a muggy and sticky way. Otherwise, I felt pretty decent coming into mile 10. My next 5-mile split was almost exactly 10 minutes slower. But it’s harder running. I told myself to stick that pace.

I held my own through Spirit Mountain, and once I passed the last 100k stragglers, I felt lonesome out by myself. Nobody else near me, just hanging out in fourth place. Climbing out of Spirit, I felt the urge to walk. I dismissed the thought and just shuffled my way up the hill. The early onset of fatigue and low-volume training was starting to surface. By the time I got to Cody Street, it was really tough to maintain a reasonable pace. My split from mile 15-20 was just shy of one hour. To win, I knew I’d need under 4:45, and that equates to less than 50 minutes per 5 miles for sure. An hour was way too slow and I did not foresee a second wind. I wasn’t walking a whole ton, but my running pace was noticeably slowing. From here, the derailment was swift, but the remainder of the race was long. Very long, painful and drawn out.

Like a ton of bricks, my motivation and energy levels plummeted and I was dead meat. I got passed a few times through Brewer Park after the Highland Getchell aid station. I was really going slow by now, and knew my next split would be over an hour. A slow and painful death, but now was the time that I realized what was happening and my mental state came into play. I knew I wasn’t trained to run fast enough, I was dead meat. Piece of crap. Whatever, it’s still fun, I thought. Just jog it out.

Through the tunnel under Haines Road, I could barely run. I wasn’t that sore, it’s just the terrible feeling of not being able to turn my legs over fast enough. Slowwww. I was passed a few more times into Piedmont, once by a woman who was holding her hand cockeyed. She mentioned how she fell a bunch and thinks she tweaked a nerve or something. Ouch. Then she fell again right in front of me. I couldn’t even hang on to this woman… I got chicked. She got back up and ran past me with the speed of a track star–out of sight in no time. I didn’t even know what place I was in at this point, but was nearing five hours through Lincoln Park. After the last aid station, it’s all easy, I thought. 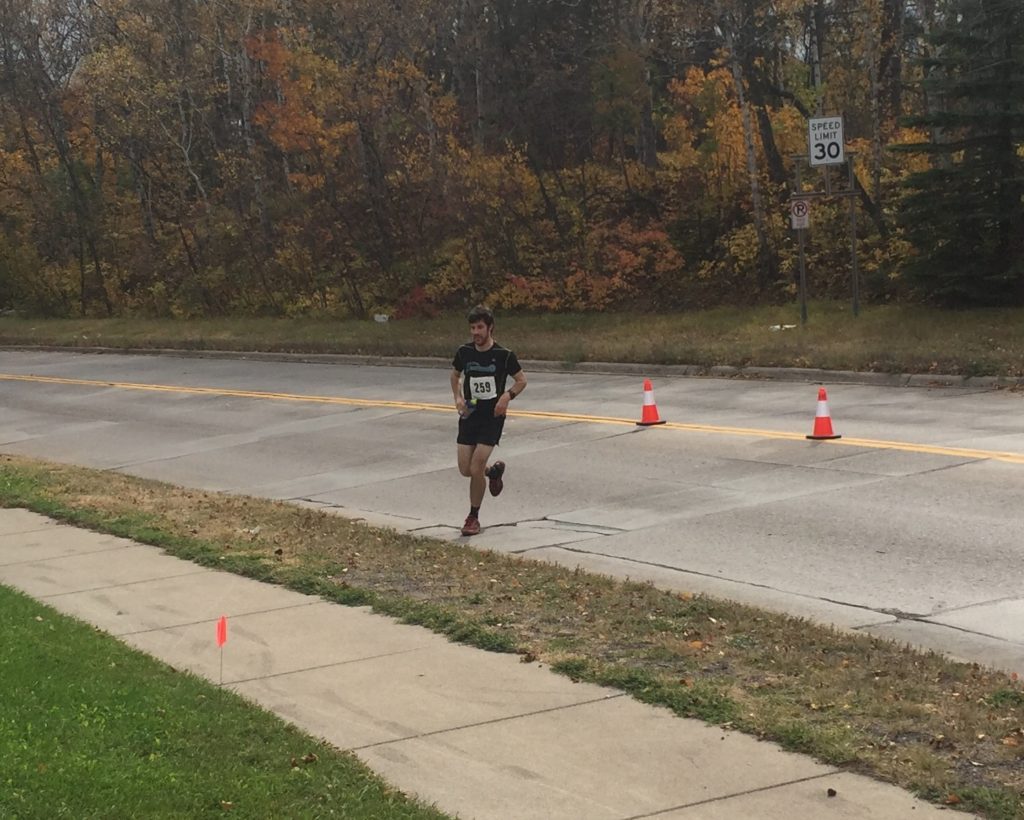 I took my time at the Duluth Running Co. aid station, and expressed my woes to the familiar faces handing out drinks and snacks. I took off jogging across Piedmont Avenue at a comically slow trot, but picked it up. I told myself to finish somewhat strong… the pain will all be over soon enough. I didn’t feel too beat up, but just had no step, like a car stuck in first gear. It took forever to get to Enger Tower, and I got passed there too. Worse than getting passed repeatedly is that I couldn’t hang on to anyone. They’d pass me with ease and run out of sight in a flash. Am I really going that slow?

I finally got to Enger and then just leaned forward for the straight downhill bomb towards Bayfront Park and the finish line. This was the easy part, finally. Just don’t get passed anymore, I thought. I had nice form coming across I-35, and peeked behind my shoulder just to make sure I didn’t have to bring the pain on some fools behind me. Nobody there, luckily. A short jaunt and I was within striking distance of that stinking finish line after a long, long morning. 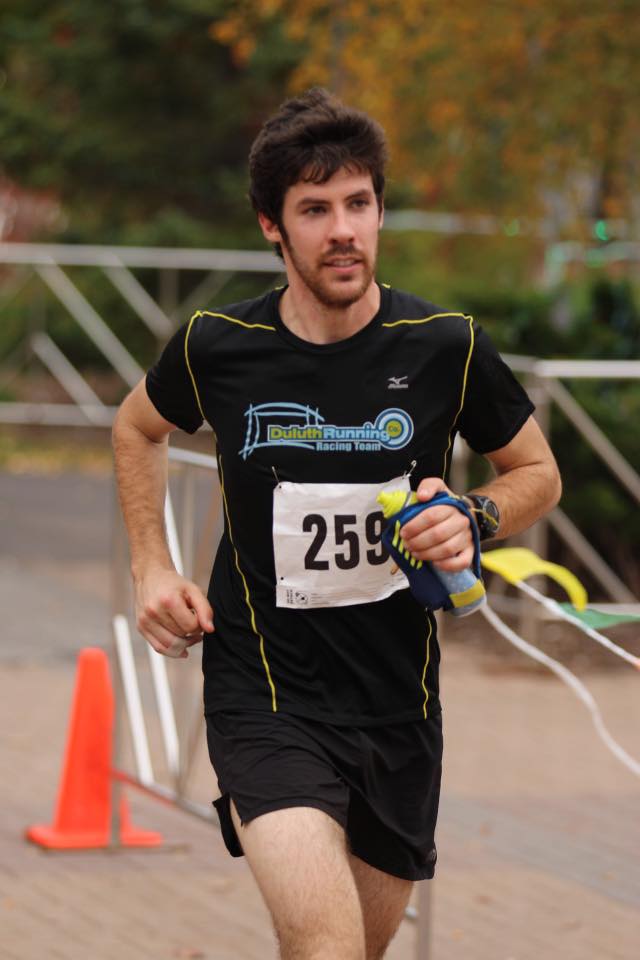 My watch was well past 5 hours, and it looked like I’d be just about an hour slower than my winning time from 2014. Piece of crap, but what do I expect? I finished and sat right down on the ground. 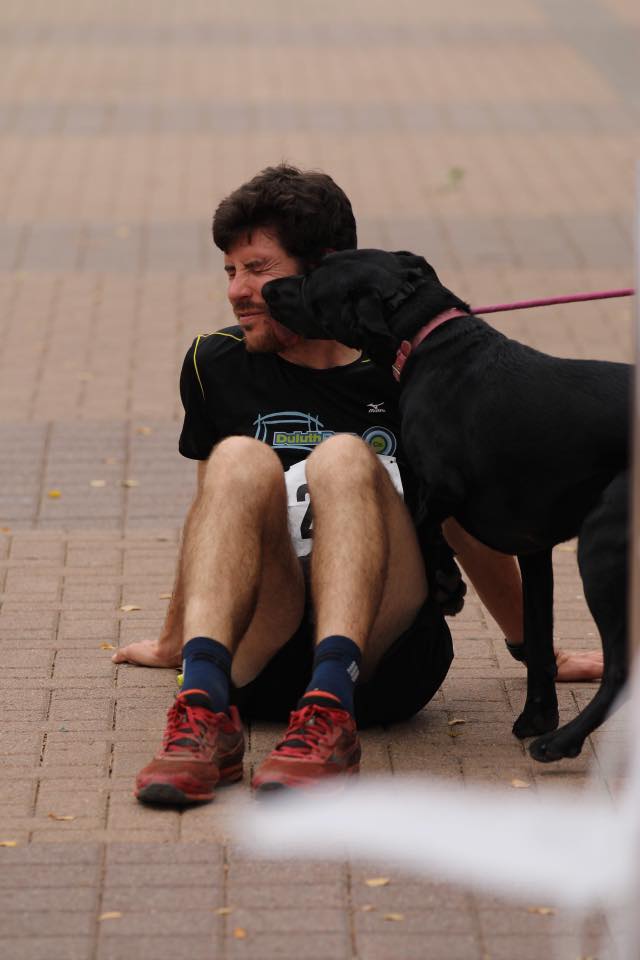 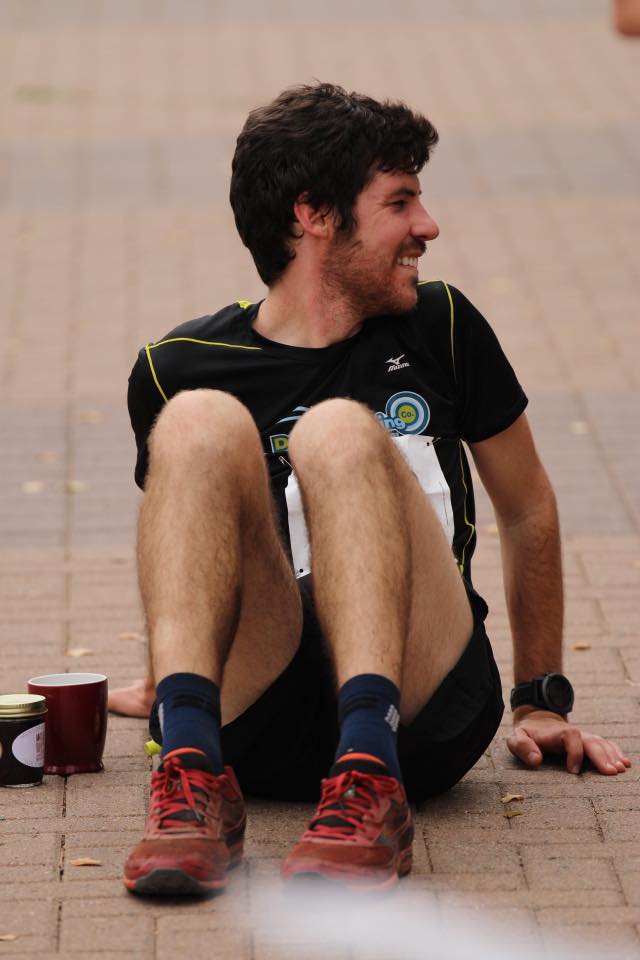