Inline skating is a fun way to race. I was super excited to race a marathon, 26.2 miles, on skates, and had a pretty laid-back attitude towards Apostle Islands Inline Marathon up to race week. I actually got some good training in, felt pretty confident that I could hang and be in the mix, and didn’t feel like I had anything to lose.

On race week, I started getting a little nervous. Jeesh, what about the pace line? They’re going fast, I don’t want to fall. I had Grandma’s Marathon looming just 7 days after… back to back marathons… and a nagging plantar facia band aggravated by running and so felt about equally lackadaisical about all my upcoming races. But I still wanted to compete. But who am I with the big dogs? Why did I sign up for the Elite division? The doubts started creeping in.

Girlfriend Emily and I drove to Washburn, WI on Wisconsin’s beautiful south shore of Lake Superior to meet my sister Emily and dad at his campsite with trailer parked. We stayed there overnight, then took the van across the ferry in the morning to race and spend the day on Madeline Island, where the race course was located. It was three loops around half of the island for me in the marathon, two loops for Emily and Emily. Girlfriend Emily seemed a little doubtful of her abilities but I was excited to see her surprise herself.

The day was very cold, but with beautiful sunshine. It didn’t seem possible, how the sun was beaming down, the greenery in full bloom, just a perfect day but in the 40s. In mid-June? Weird. Oh well, it made for good racing conditions, I figured. I warmed up a bit, not wanting to schmooze with anybody or talk to anybody. I was excited to just get out there and rip. I took a spin for maybe 10 minutes, then shook out the jitters and caught up with my crew. Everyone seemed ready to go! My race went off first and so with a couple minutes to spare I made my way into the start area and conglomerated with the rest of my wave. It wasn’t the biggest wave in the world, maybe about 20 of us. I looked and felt a little out of place. I was definitely the only one in high boots. There were a lot of team speedsuits and custom molded boots. Then, “READY GO”! And we were off.

At St. Paul half marathon last year, a big pack was gone right away and so I scraped my way up, passing people the whole race. I vowed I would not let that happen at Madeline and go out hot, all-in to get with the lead pack. The start was a little frenetic and I just tried to skate fast without hitting anyone beside me. I looked around trying to figure out what was going to happen, and no line formed right away. A couple hundred feet into the race was a right-hand turn. I took the turn and found my way toward the back of all the skaters at this point. Cripes, push Mike push! And just like that, the lead pack was already gone. Gah. Luckily there were several groups of guys all around me and I just pushed as hard as I could not worrying about the pack. A secondary pace line kind of formed up, but I zinged ahead of them, vowing to go out hot and see where that got me. I think the make-or-break moment of the race was at this point, one mile or so in, when a group formed with just two other guys. We were a tight and efficient pace line and I felt like a real racer. One of the guys, name Travis, was commanding our group, and it was well received by me for sure. He was yelling out “switch” and we’d change positions and give the front guy a little break. He was shouting little mantras like “keep it controlled” and stuff, and I can definitely get down with the mantras. It jacked me up.

All the sudden, about halfway through the first lap, I notice another group coming behind us. Must be the masters guys, I thought. It was a big pack. Real big. I wondered if my two other new friends would jump on with me, but I was going for it. We moved over a bit, and at the very end of the line, I jumped in to place. The pack took off, and boy it was a lot of guys. I was on the end of it. I would guess there were 50 skaters in one single pace line and we were moving!

I noticed that it was pretty easy to keep pace, although there was some accordion action going on where the group would clump up and then stretch out. I wasn’t too good at keeping up with those stretch moments. I didn’t seem to have great power and couldn’t respond as quick as the guys in front of me seemed to respond. I also was not good on the corners, and there were several on this course. Each time a corner was approaching it was a little nerve-wracking, and I seemed to take it much slower than those around me. So my strategy of not sticking out was maybe not going so well. In no time, we went thought the start line and started on lap two.

Right after that first turn, the field kind of clumped up and spread out. I wondered what was going on. I got pushed off to the side somehow, then the line formed seemingly without me. Well, the guys up front don’t know I’m back here, gah, how did I get edged out?? A guy let me back in. It happened again, and was a little dicey on lap two with other slower skaters to one side and traffic on the other side. I shook my head and just went ahead, blasting past the whole pace line with no agenda. I just pushed hard for a while up a hill, hoping maybe some guys would chase and get in another group. I don’t know what I was thinking and nobody went with me at all. Definitely sticking out…

It took a minute or two before the massive group swallowed me up again. I tried to latch on the back and almost lost the whole group! I pushed as hard as I possibly could to get in behind the group, and it was a very close call indeed as I narrowly avoided losing the whole group around a corner. I just held my place on the very back of the pace line from here. In no time, we were back to the start line and started lap three.

I found myself struggling around that first turn and up a bit of on incline. I started chatting with people and asked if the group would go now that it was the final lap. I didn’t get a super specific answer. Another guy recognized me from before, perhaps by my lap two antics, and yelled “ohhh! Ole Fall Behind!”. I don’t know if I liked the nickname, but hey, it was fitting. My legs started feeling a little shaky, and I found myself at the very back once again, and struggling more and more to keep with the pack as they accordioned ahead and I fought hard to stay in the mix.

It was halfway through the final lap when I struck my last match and noticed as the pack crept just out of reach. Next thing I know, it was a stones throw, then a ways out, then totally unreachable. With a turn just ahead, I saw my time in the big pace line slip away. The pack steamed around the corner and I didn’t see them again. Oh well, I sighed to myself, almost in relief. I just put my head down and cranked away. My legs were feeling OK, but a few sore spots were definitely forming. My back was getting irritated, but I felt locked in to the aero, crouched over stance.

I passed other skaters, who knows what loop or race, until I saw another skater ahead who was dropped by the pack. I could just tell, and noticed that he was in the hurt tank. I would pass this guy. When I got closer, I recognized him as a dude in my category. Boom! This is exactly what I need to finish the race strong, I thought. I planned it all out: I would first pass him, then put on a bit of time for safety’s sake, then finish right ahead of him and see where that gets me in the Elite 30-39 category. I felt excited that I would get to compete with at least one person into the home stretch, and even better if it’s someone in my age group.

My pass went smooth, and I made sure I looked smooth and pushed hard afterwards. My legs just didn’t have the oomph I wanted, but I was moving for sure. I sensed he was on my back though. Of course, why would he let me go? I definitely noticed he was struggling, but I wasn’t far off. I hammered in to the finish, and knew he was right there. Then there is the final right hand turn, and a few hundred feet to the finish. I just didn’t have a good feeling… I knew I was sucking at the corners and almost sniffed the defeat.

I hit the corner and did not feel comfortable to push, let alone pull a crossover move. Onto the straight, and I just knew the guy was right there. I had no power. I let it all out there, my form went out the window, which was probably not helping my cause to beat this guy. 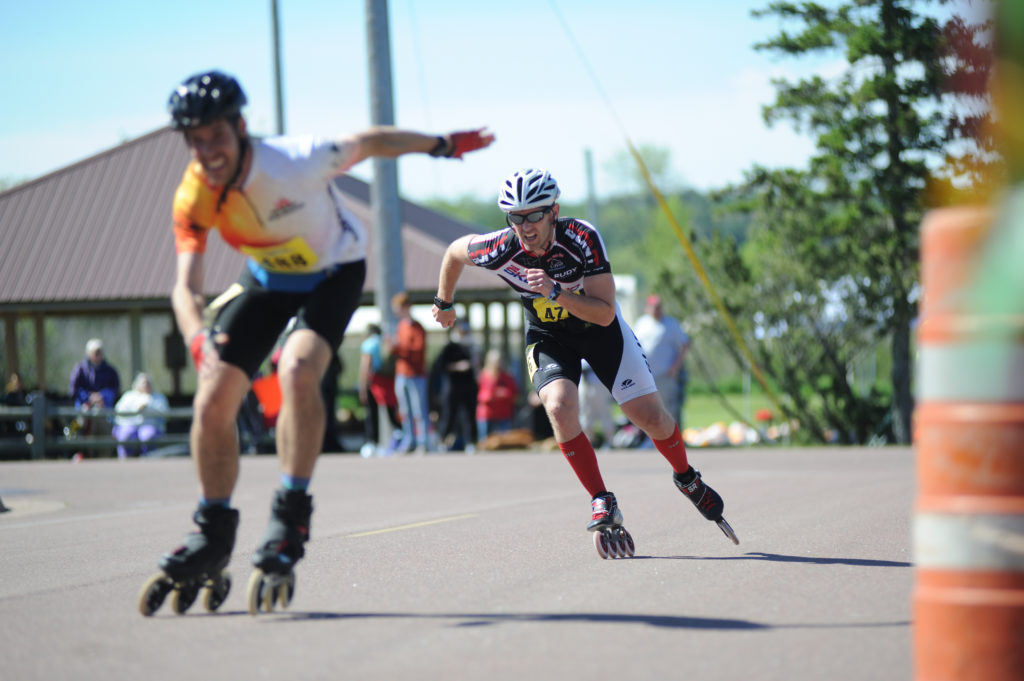 He just strolled right along side of me and into the finish chute. I actually yelled “NOOO” as he passed on my right, probably fueling his final push. And then there’s the line, done. What a terrible finish! I was actually pretty elated, though, to have stuck with the pack and finished with a really good time, and the excitement of the last second push. It was kind of funny, and good for this guy. He had a jersey on, low cut boots, probably deserved to beat me. Then again, it was a really sour feeling to get edged out by literally one second.

The course was great, and I was super satisfied with the event as a whole. It was really fun and felt great to have a skate marathon under my belt.