The Green Lake Triathlon is a perennial classic. I love this race and I’ll keep coming back even though it is a trek from Duluth! The course is sweet. Green Lake is super nice and clean, the bike course is smooth, flat and fast, and the run is along the lake. Also, the transition and race site is awesome and there are always great amenities. Like pizza and beer.

Going into the race, I had a pretty weak week of training and was working a lot on Friday and Saturday. Add the 3.5 hour drive on Saturday night and it makes for a less than ideal lead up. Either way, I didn’t have too many expectations with my performance besides that I wanted to win. Bad. Real bad. Based on my fitness this season so far, I figured that I could likely pull it off depending on who showed up. The field of triathletes was spread thin for this particular weekend as Age Group National Championships were in Milwaukee and six other races were scheduled for Saturday and Sunday. Minnesota Tri News pretty much slated me to win, which was a boost of confidence for sure. On the flip side, it is always fun to race, and anybody will put up a better effort if placement is on the line. Reeling someone in or running scared is much more motivating than being way off the front by your self.

Anyways, race morning started off nicely. Mountain Dew, Sports Beans, a little coffee, deuce deuce and I’m ready to roll. I took my bike out for a spin and the mechanicals were working perfectly. Jogging around felt nice. I popped my wetsuit on and went for a few strokes in the lake. My arms definitely felt heavy, but the warmup helped. The lake was perfect temperature and calm. It was windless and in the low 70’s… ideal racing conditions. I peed in my wetsuit with hopes that the added saliency would add to the buoyancy of my wetsuit. I started in the first wave so I hopped back onto the beach and we were ready to rip.

I stood next to Tim Bode, who’s raced with me and Green Lake many times before. He is a beast swimmer and I thought that I could perhaps stick on his heels. I even revealed my plans to do so, and with characteristic Minnesota modesty, told me I’d be able to with no problem and that he’d probably be drafting me!

With a ten second countdown, the horn blared and we were off. The start was much nicer than Chisago and I got out towards the front immediately. I looked up and Tim was right there. I did two more strokes and looked up and he was approximately 50 meters in front of me. WHAT!? Just like that?? I was baffled, but kind of expected that and could only hope to be second out of the water and not too far behind Tim.

The remainder of the swim was nice. I was more or less by myself. I got pretty disoriented at the turnaround and had to completely stop swimming and look up to navigate correctly. I came to the last buoy with a large hoard of short course athletes and brought it home. I made the executive decision to take my wetsuit off in the water again, and I can’t decide whether or not that is faster or more efficient or not at all. I’m actually leaning toward faster, but it is embarrassing to be at the shore fiddling around with my wetsuit and thrashing about. Regardless, I got it off pretty quickly and my transition was very fast. 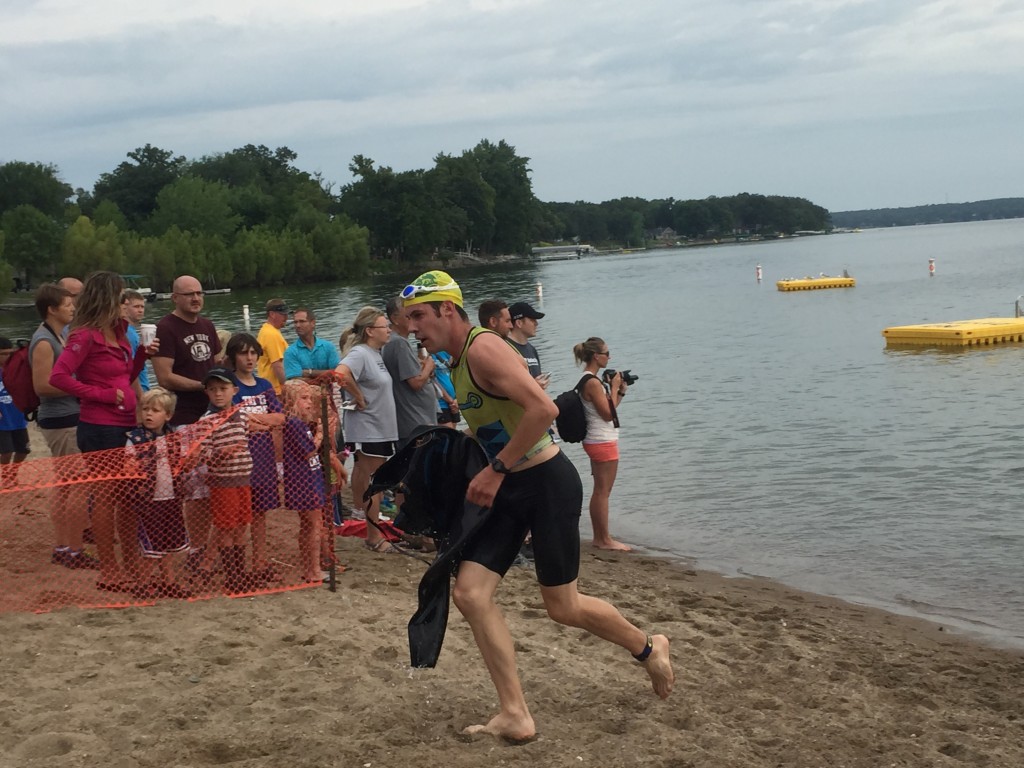 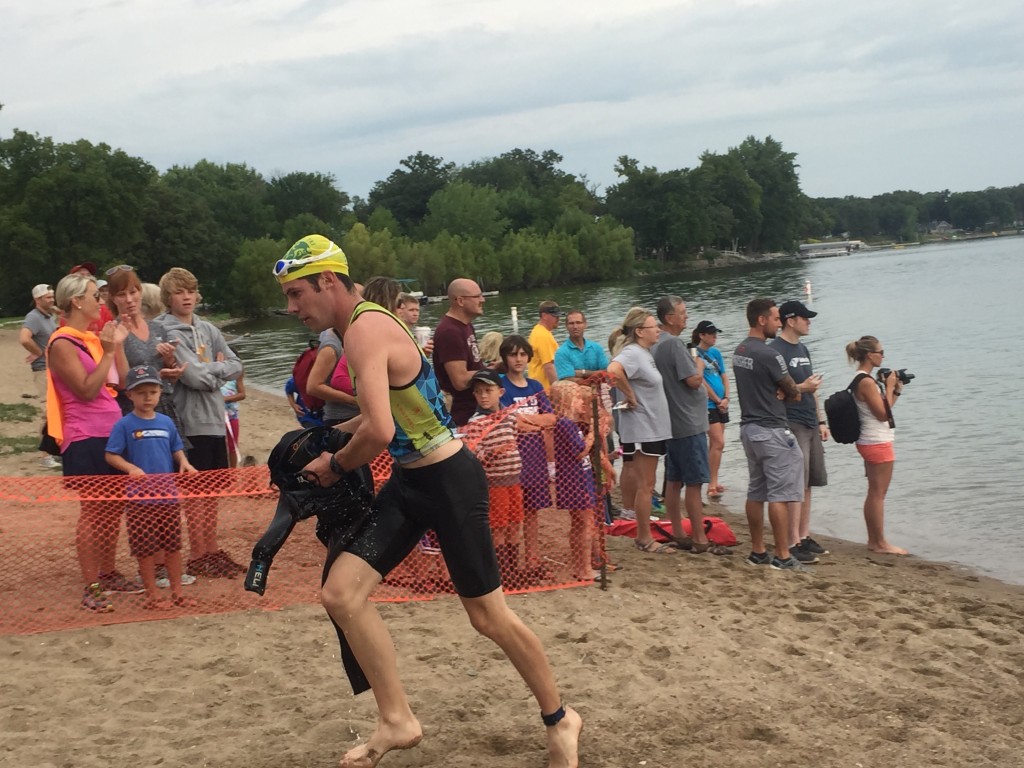 With my trusty steed in hand, I ran toward the bike exit and mounted. There was another dude in a slick looking Shiv next to me and we started together. Once my feet were secured to my shoes, I stood up and jetted past him. My game plan was to smash the bike as hard as possible. It’s such a fast course and my biking has been on point lately, so I figured that there is no reason to mess with the formula. However, it is frustrating be seemingly limited by fatigue on the run.

I could feel that I was going really fast on the bike. Unlike the 56 mile ride at Chisago, where I wanted to have an even race and leave a lot for the run, I was mustering out all of the power I could. It was funny to get to the point where I’d go hard for a minute or two on a nice stretch and then be tired. At Chisago, and during training, biking is so constant and it’s rare to get that sort of “can quit right now please” feeling. I passed Bode a few miles in and was in the lead. On the flat sections, I was just tracking with the white line, head down, grinding HARD. I merged with the short course folks, and passing people on beach cruisers made me feel event faster.

I got into T2 feeling pretty beat up, but good nonetheless. My legs definitely felt heavy on the run, but that feeling passed surprisingly quickly. I was going at a pretty nice clip and pretty excited about being able to turn over quickly right out of the gate. At the short course turnaround at 1.5 miles, I was at 9:50 or so, which was 50 seconds slower than I was shooting for. That was frustrating, because I felt like I was going fast and I was definitely breathing hard. I kept pushing and felt really good until the long course turnaround at 3 miles. That split was around 20 minutes. I was hoping to get there a whopping 2 minutes earlier, which was again pretty frustrating. I decided to kick it up a notch for the last half. My turnover felt really good. Passing the other long course athletes was with positive encouragement, and again, I felt that much faster zipping by short course athletes past their turnaround.

I started to really pick it up with a mile to go. Although I was really far off of the course record of 1:41, I figured I’d salvage with under 1:50. 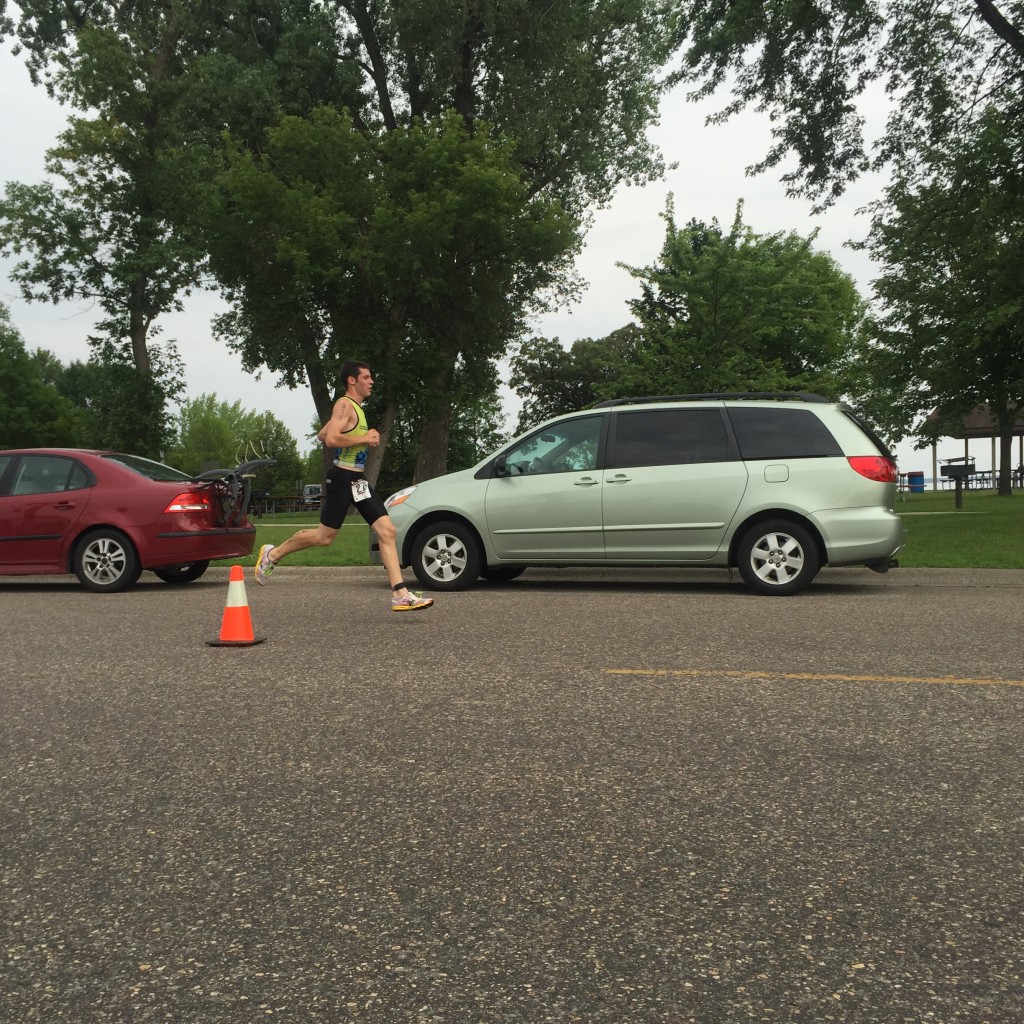 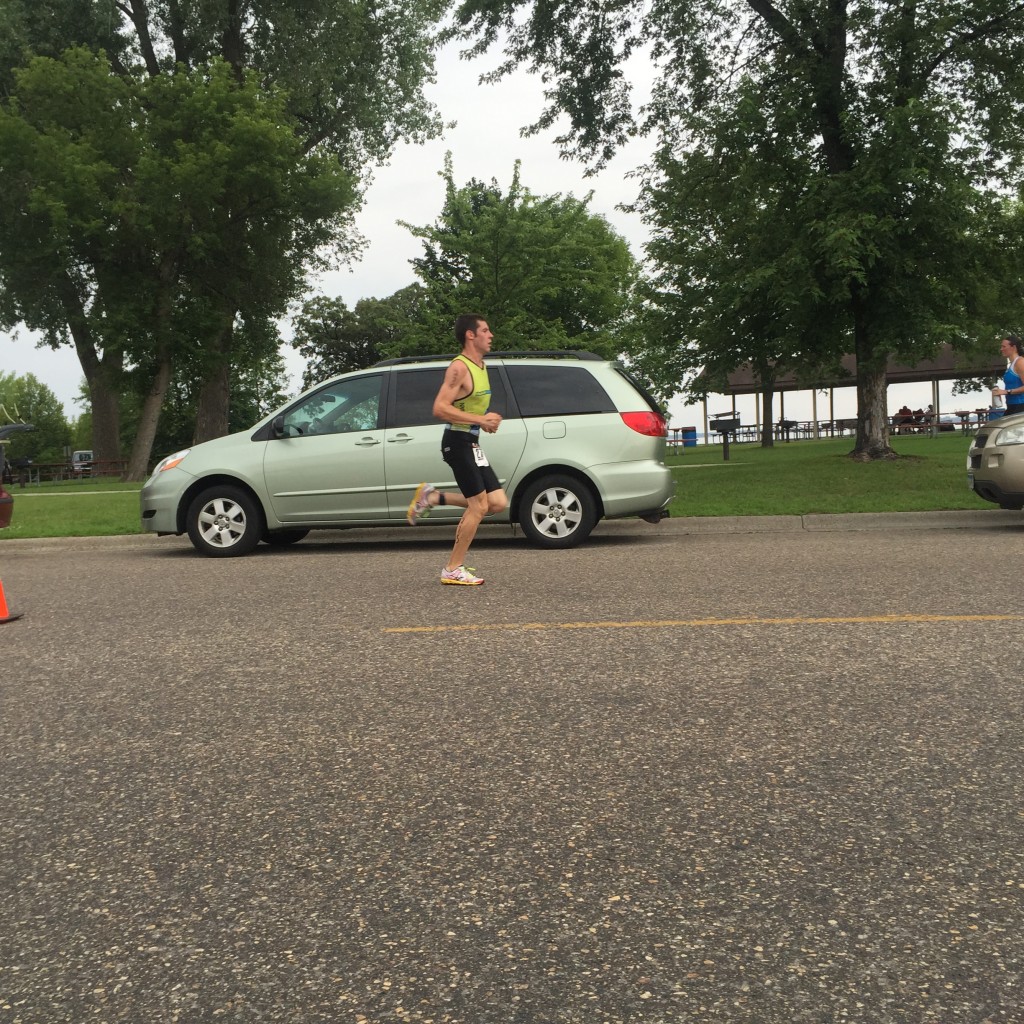 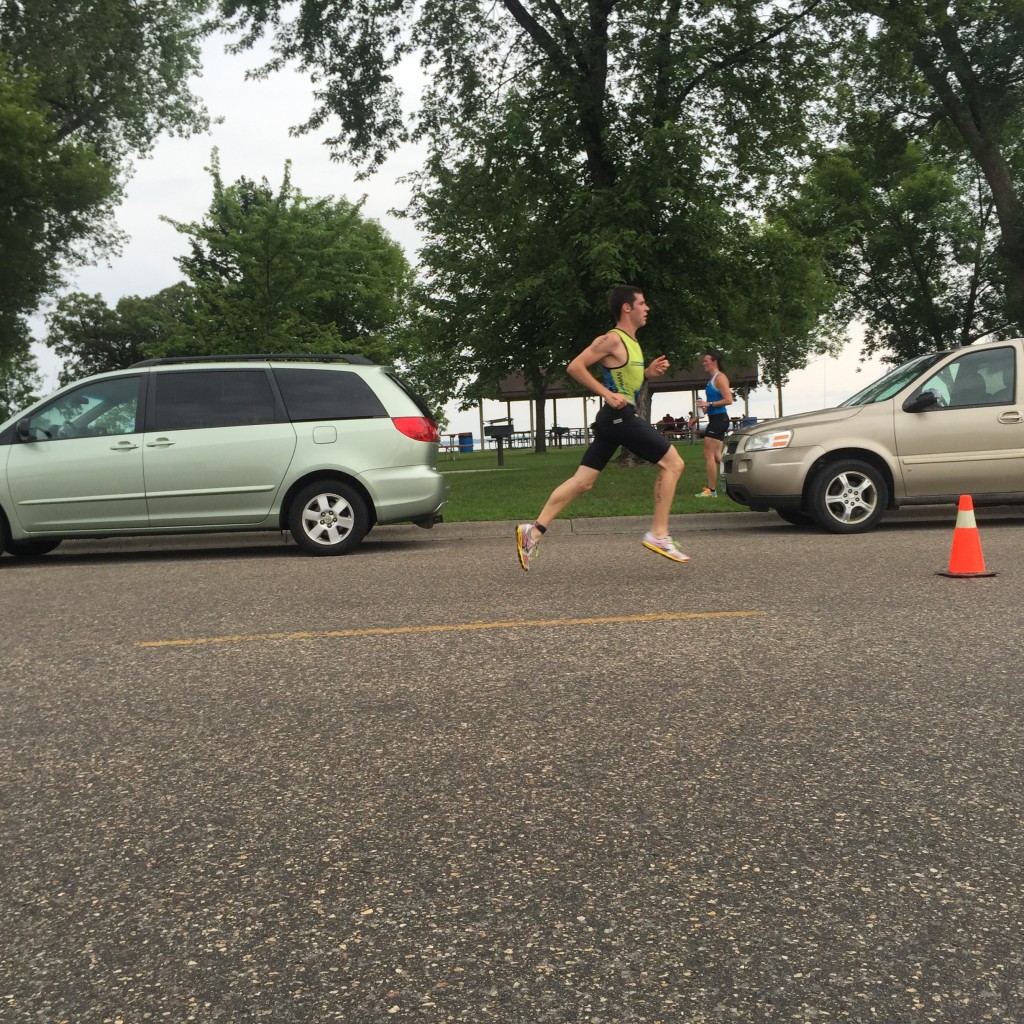 That last minute surge paid off and I came in right under 1:50. It’s hard to stomach a relatively slow run because I was running faster last year and the year before, but my open run times are light years faster this year! It equalizes, I suppose, because I’ve never biked faster than this year.

As always, Green Lake was a blast. The weather was perfect, and not 45 minutes after I finished a massive thunderstorm rolled through. I hope to get one more race in before Ironman Wisconsin on September 13, but it’s not looking very hopeful with work. All I can really look for is a methodical training block.