My alarm went off early, and I was on the trail in no time. With rain coming on the crux day, I wanted to get out early, and I was the first camper of perhaps 10 at the Springdale Creek campsite to depart. It was barely light out.

I ate my four breakfast bars before the Sawbill Trail parking lot. Very soon after that, I crossed County Road 2, past the sign for Carlton Peak, and knew I had a wake-ya-up climb in my near future. Up and up and I saw some big patches of fog in distant valleys. After my third night, I was very happy to feel a bone dry tarp this morning. My socks from the first three days were packed away and relatively dry, and I broke out some brand new Smartwools for the crux day. I knew today was going to be one of the harder days, in terms of trail difficulty, of the whole trip. 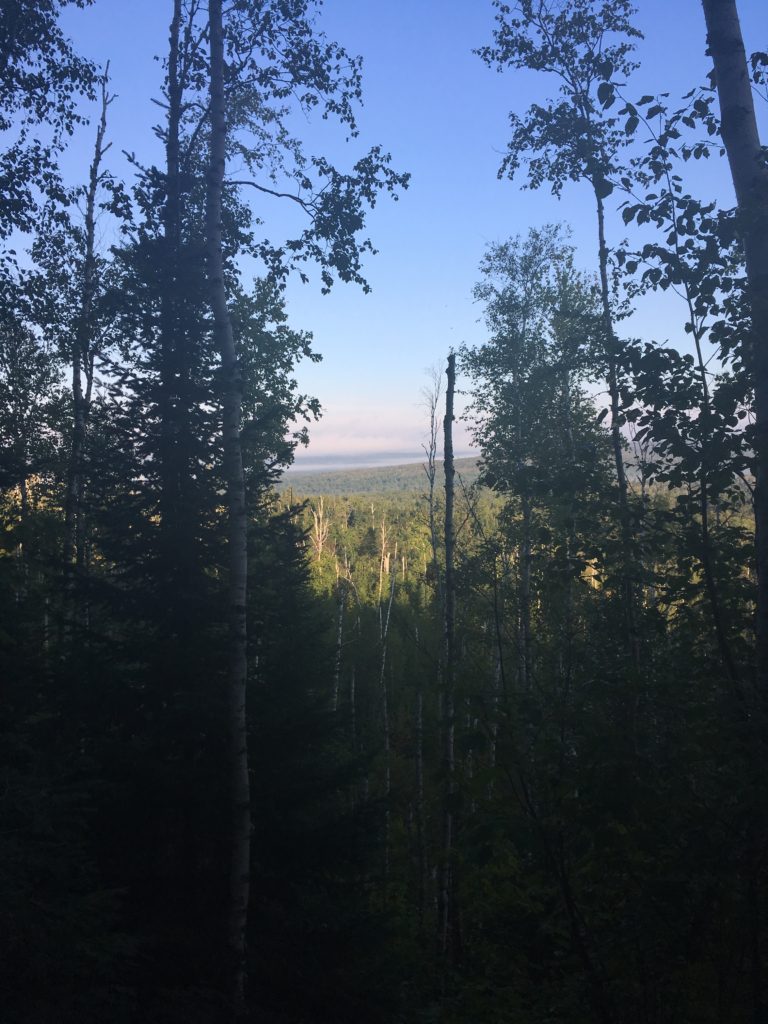 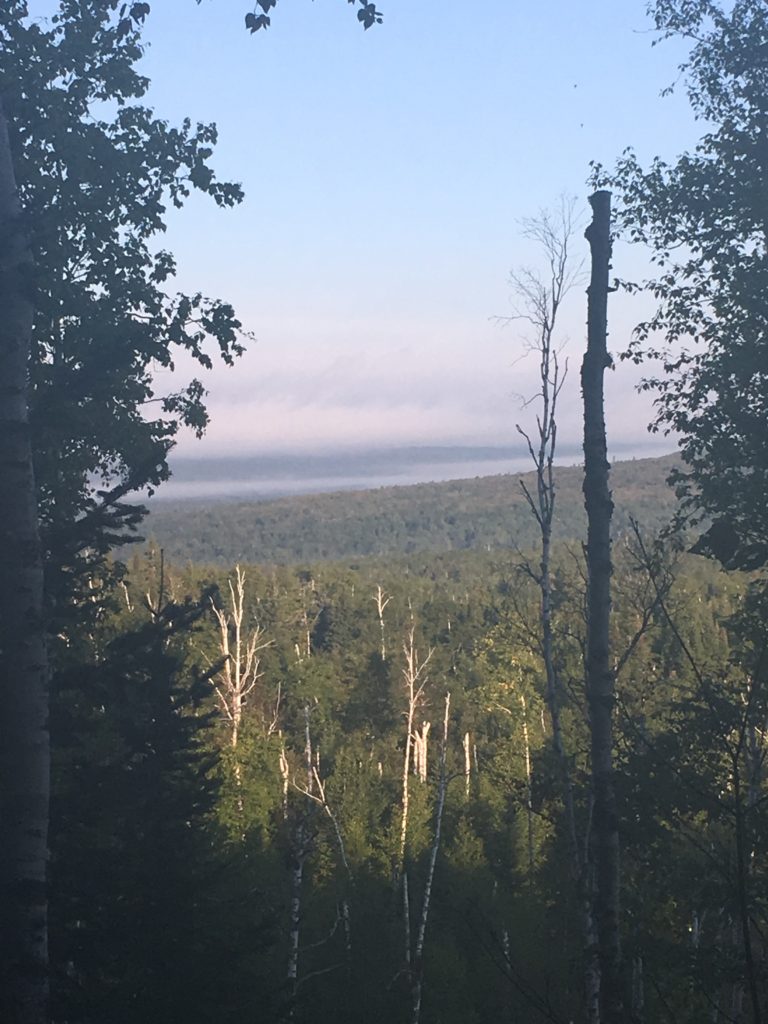 Luckily, the climb up Carlton wasn’t too bad. Quite the ascent, no doubt, but I got to the trail register with enough gumption to set down my pack and scramble up the bald rock faces to get a great morning view. I could not resist a large bellow: “MORNIN'”, and listened carefully for a faint echo from the forest far below me. By this point, I was about 100 miles in. I was setting off on the middle third of my trip, which means I was down five pounds on my food already, and broke into my second batch of rations. The view was stupendous, and I spent a few precious moments taking pictures, logging in to social media and checking the weather, and writing in the trail register: 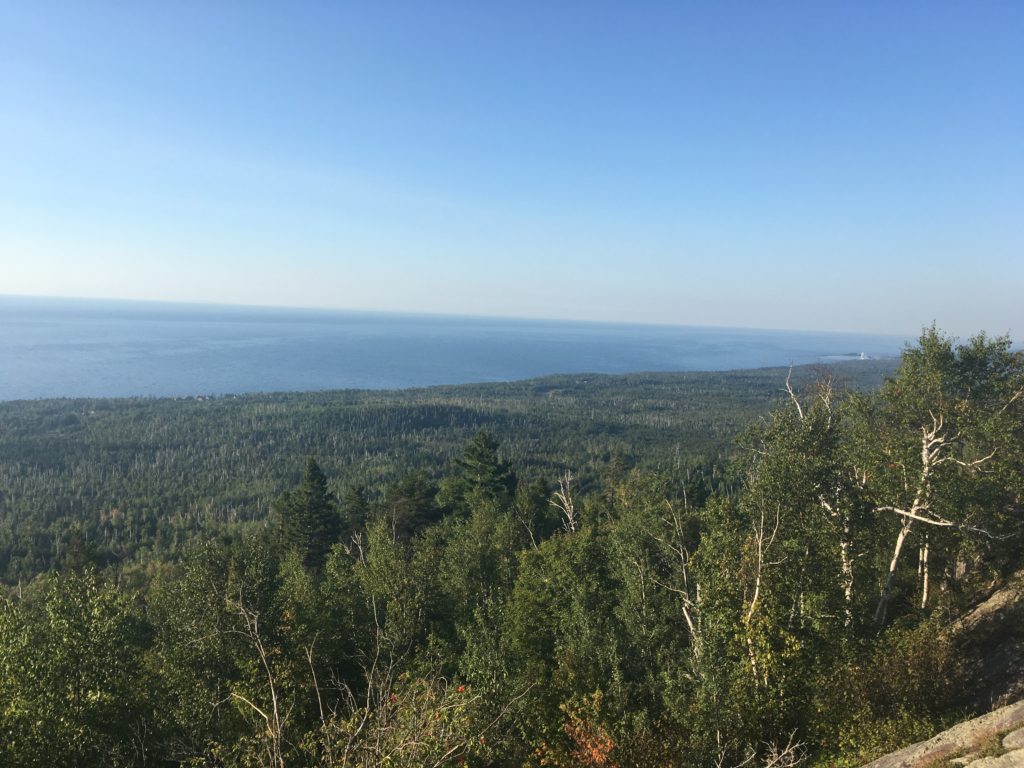 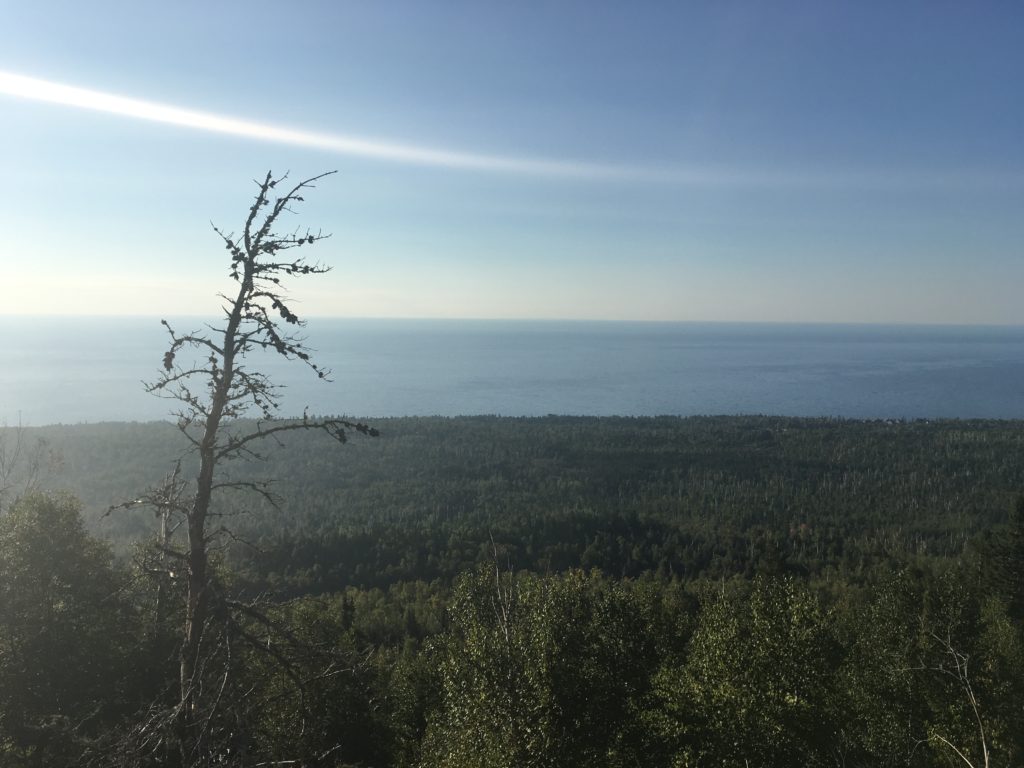 My goal for today was to take it smoothly, to feel good, and to get to camp, far away, with enough energy and daylight to set up for the thunderstorms that were looking more and more inevitable to hit overnight. So I set off, munching down several chews at a time and breaking into my Clif Bar early and leaving the Lara Bar for the afternoon. It wasn’t enough food to satisfy my hunger. It now became a matter of rationing out my food versus eating when I please. After the quick descent to the always photogenic Temperance River, I was feeling great. Hungry, but the body and mind were great. 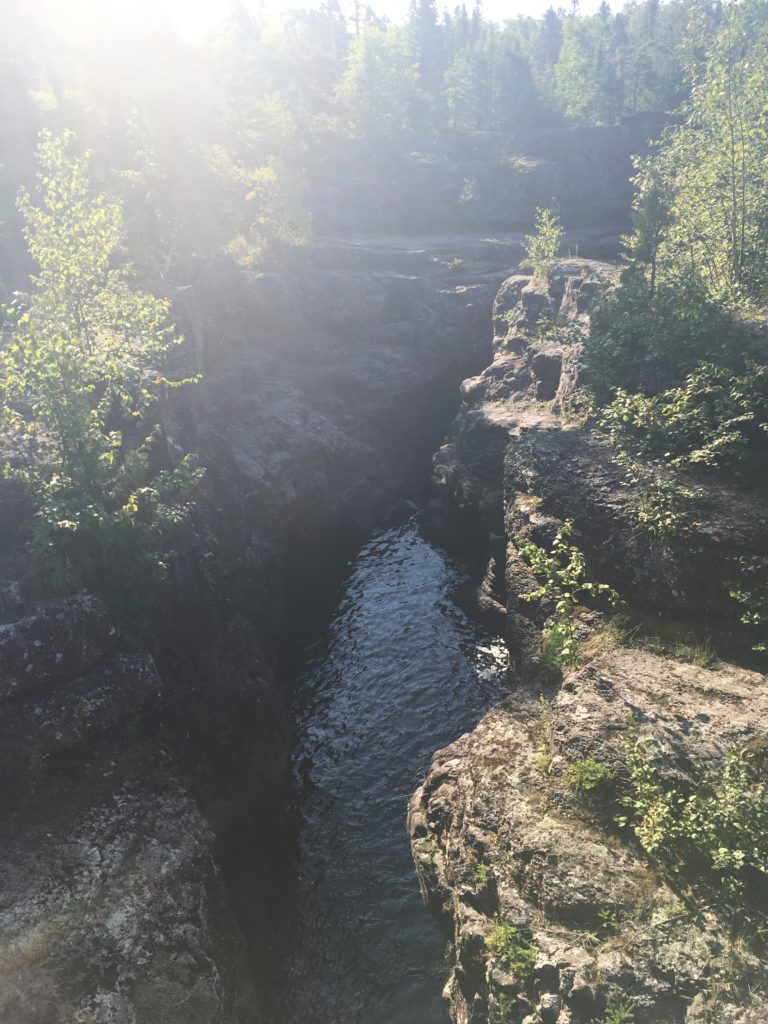 I saw several outdoor enthusiasts through the Temperance River State Park, but only from afar as they were exploring the rocks and cliffs along the roaring Temperance River. My phone was on and it was hard to resist capturing the majestic beauty of the raging torrent that has carved such a deep gorge over thousands of years. 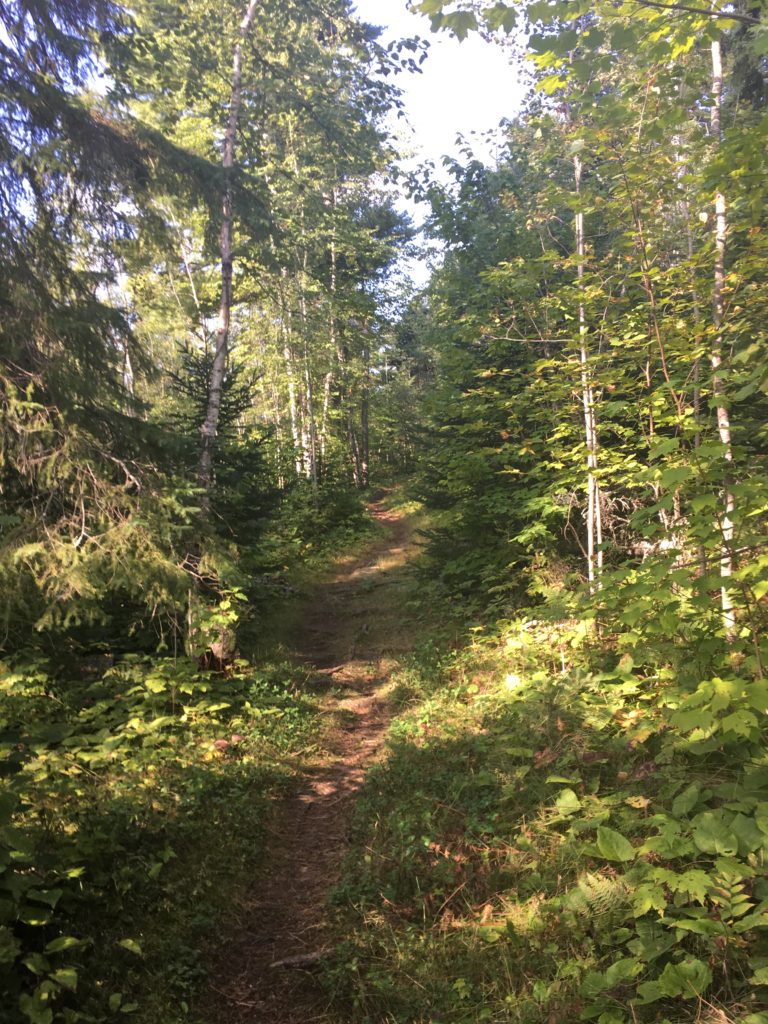 I drank from the Temperance, my mind always on taking in water, and was climbing up to the Cross River before long. I’d hiked this section many times this year, and it’s now one of my favorites. It’s hard to beat the beautiful morning sunshine, and I was carting along nicely. I chatted briefly with a guy coming from a Cross River campsite. I said I was speed hiking, he ushered me along as not to waste my time! Kind of funny, but at a certain point the social interaction is worth much more than five minutes lost. 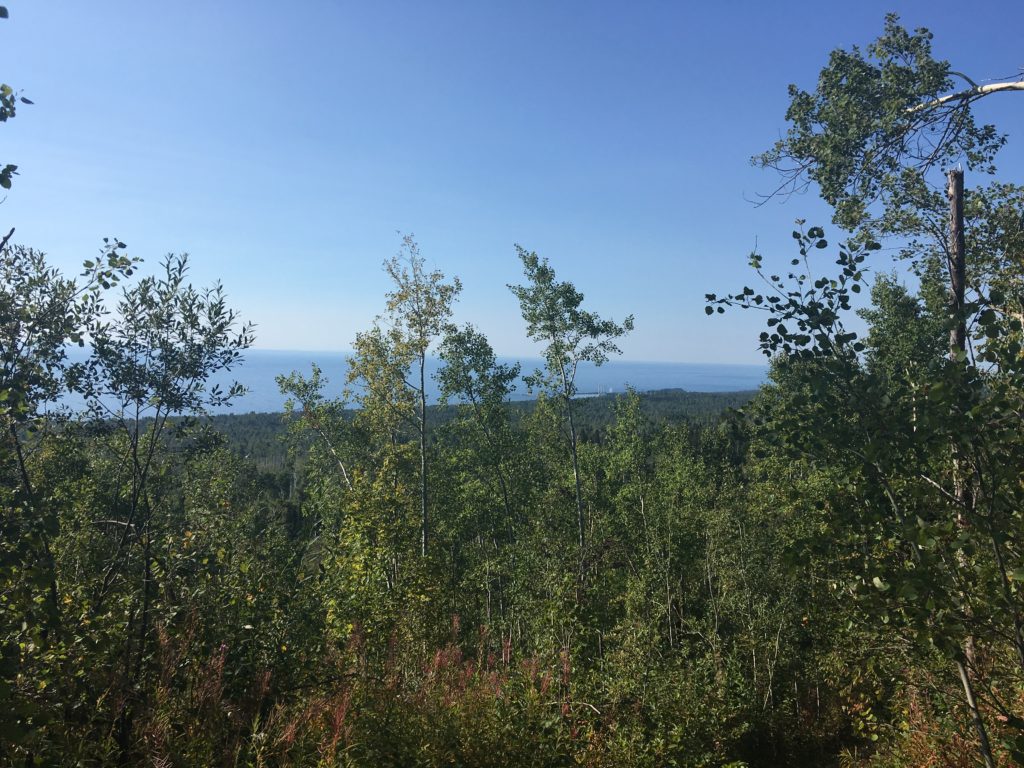 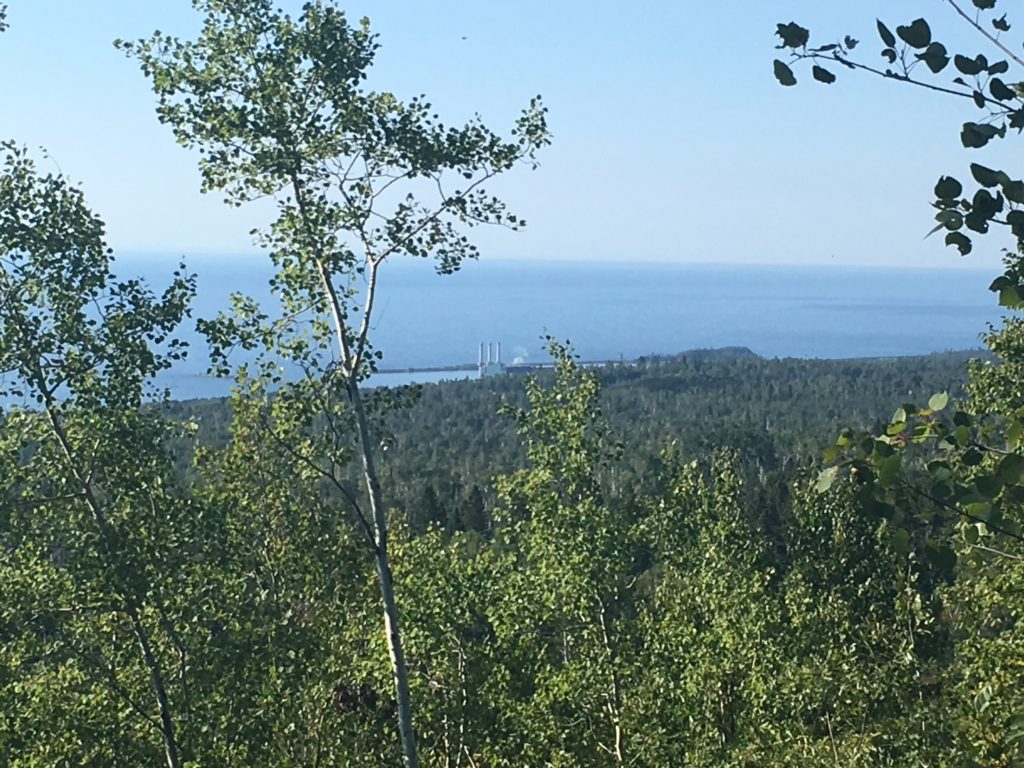 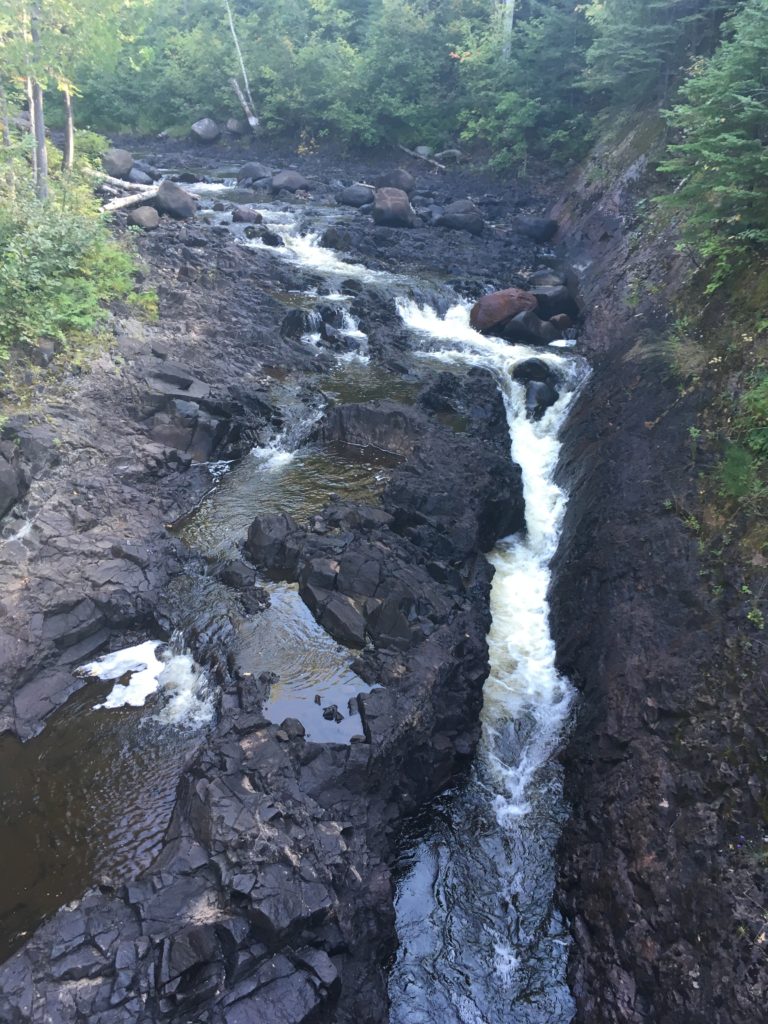 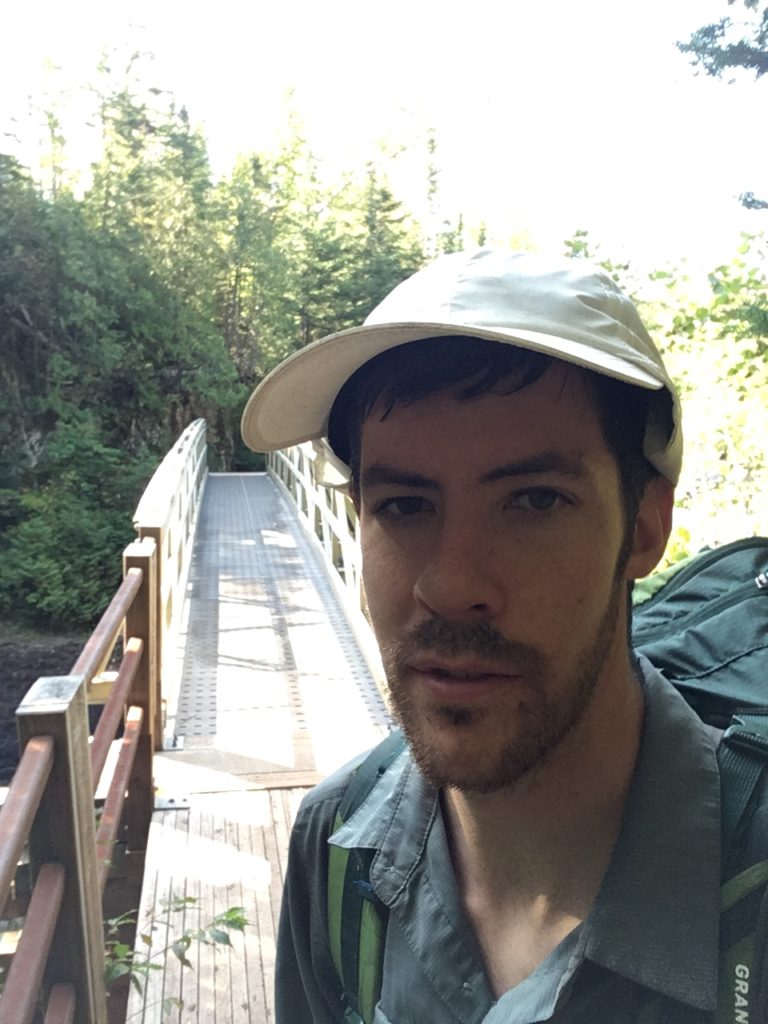 The Cross River section is always great. I was feeling good and passed a few other hikers. I intruded on a girl’s very comfy looking setup right along the Cross River as she read in her hammock. I filled up my water bottle, quickly on my way, but daydreamed about dropping the pack, setting up a hammock, and reading for 6 hours instead of racking up 18 miles. But, it was a fleeting thought, and my mind soon wandered back to strategy. Walk to Fredenberg Creek, boom. Get to Cramer Road and Dyer’s Creek, boom. Keep walkin’. 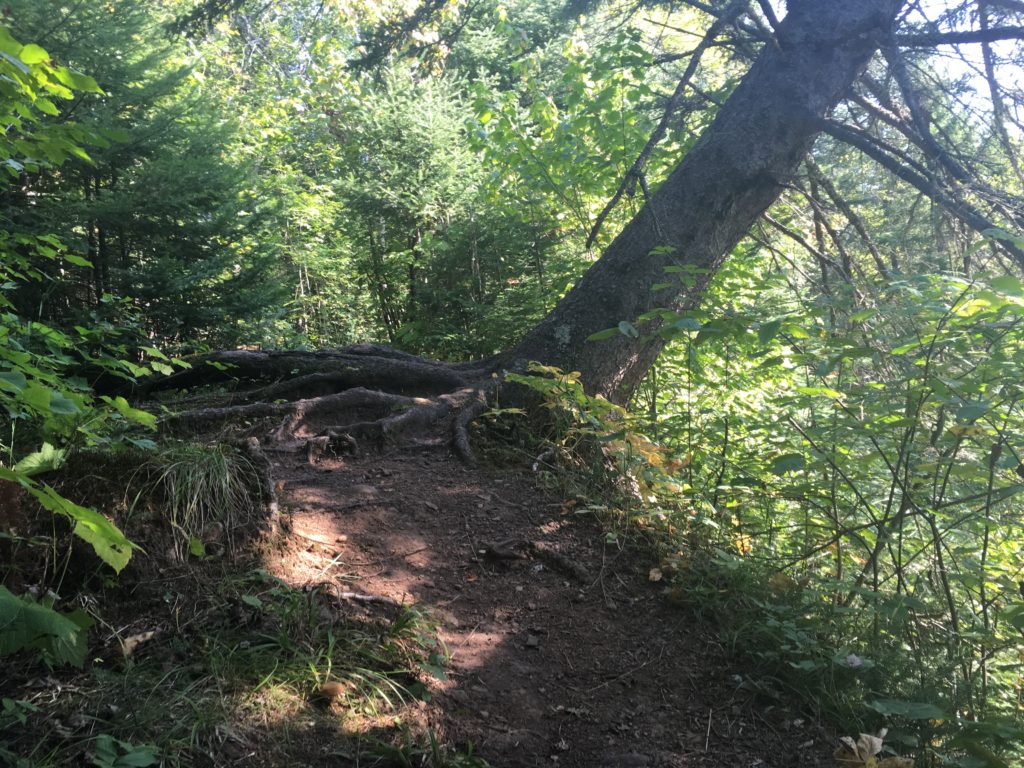 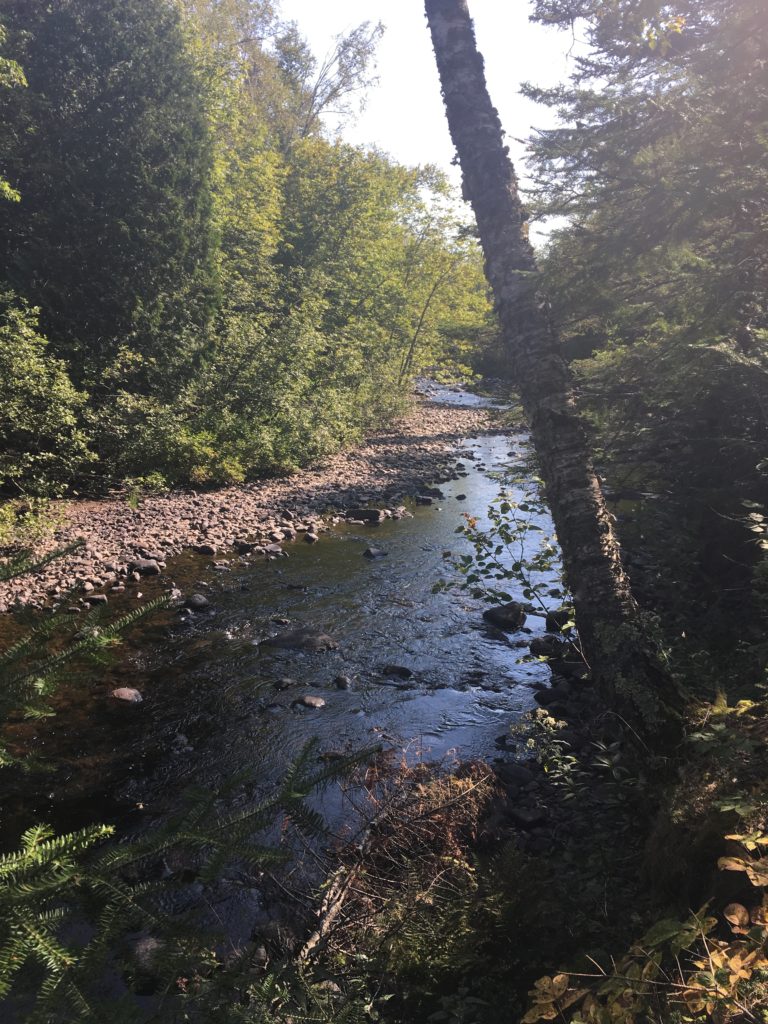 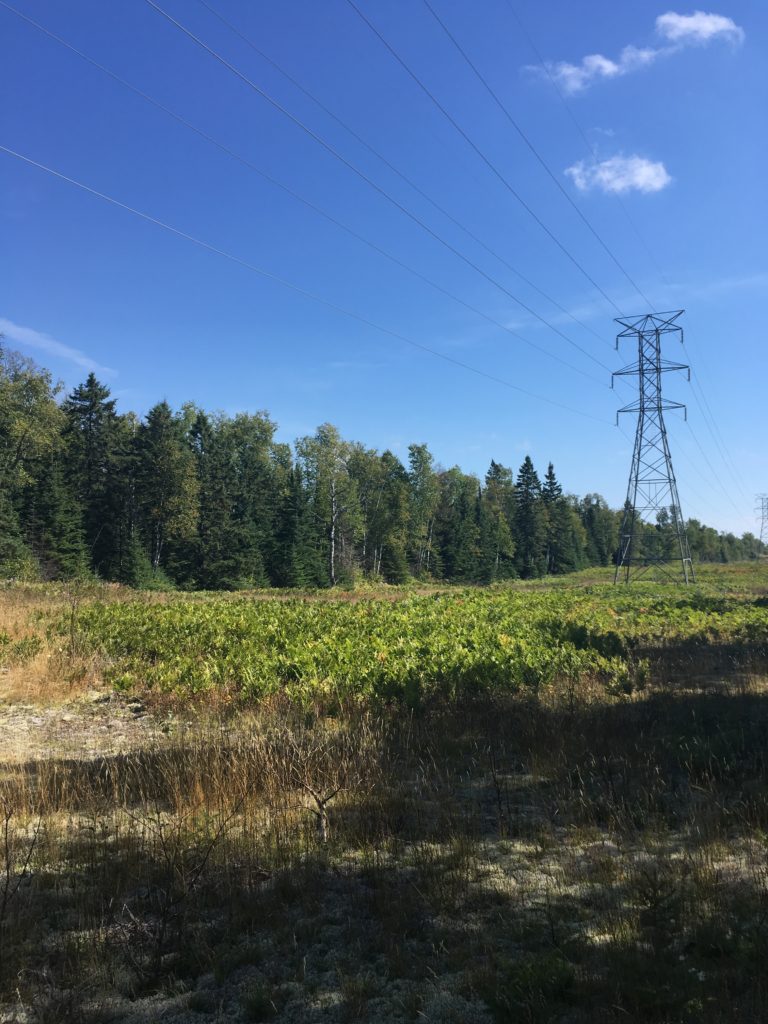 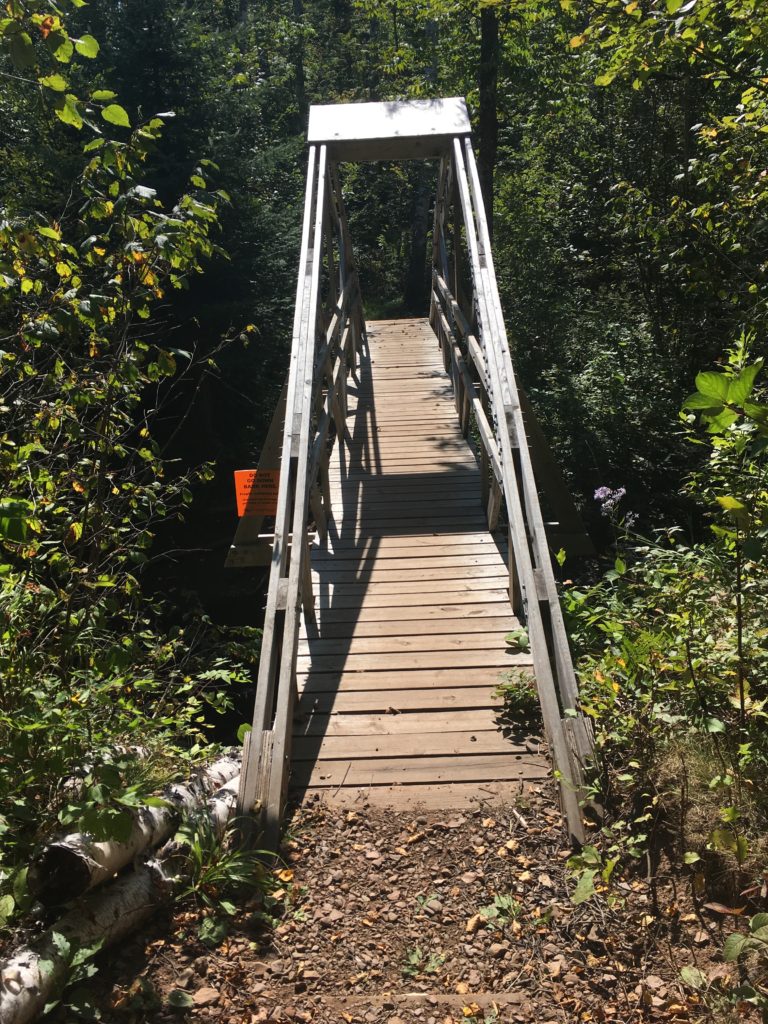 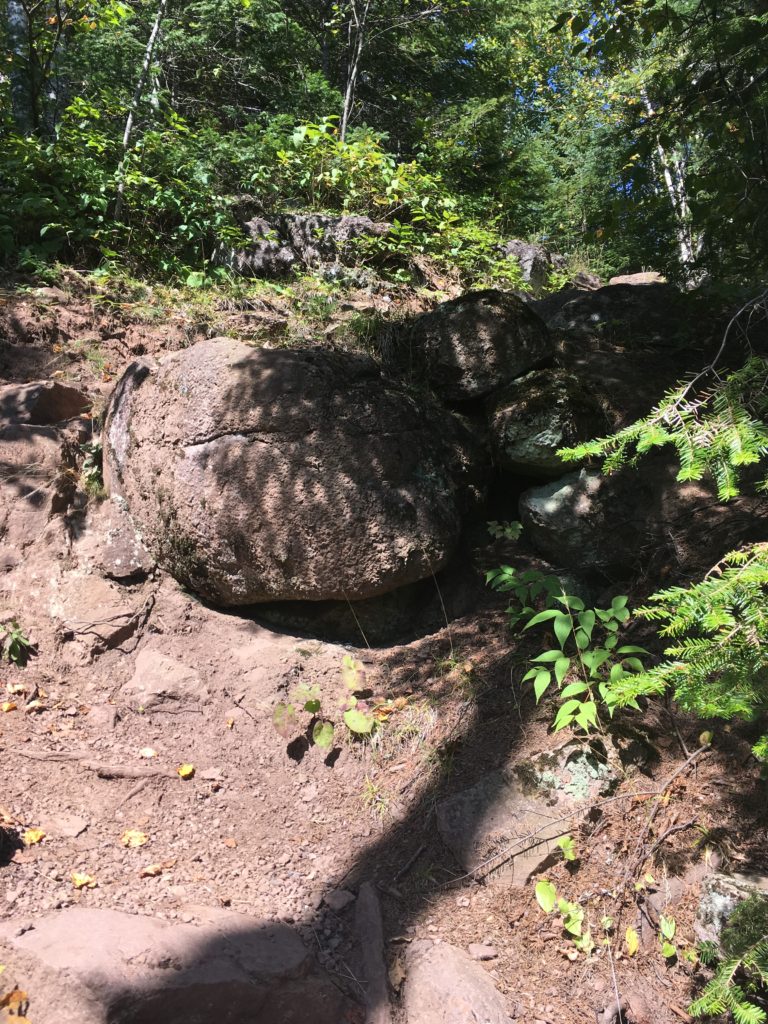 It was surprisingly lonely through Dyer’s, but it allowed me to click off miles, and the trail was in great shape for doing so. As the sun rose higher in the sky, I came across another backpacker making his way. He stopped, and I skirted around him, but paused myself to take a short rest and chat. This guy was thru-hiking as well, having never hiked before at all, and was on his ninth day. We both started walking again, and he hung with me for many miles, despite a pack twice the size. This guy was named Aaron, from St. Cloud area, and he took a few weeks off work to do this backpacking trip. He was going to make it as far as he could, a series of factors leading to the realization that a long hike is the best way to spend his vacation time. It was great to get into the mind of someone besides my own self, and we hiked for almost an hour. At Sugarloaf Pond, I had planned to stop for lunch, and Aaron continued on. He was pushing for the Caribou River to break for a while. 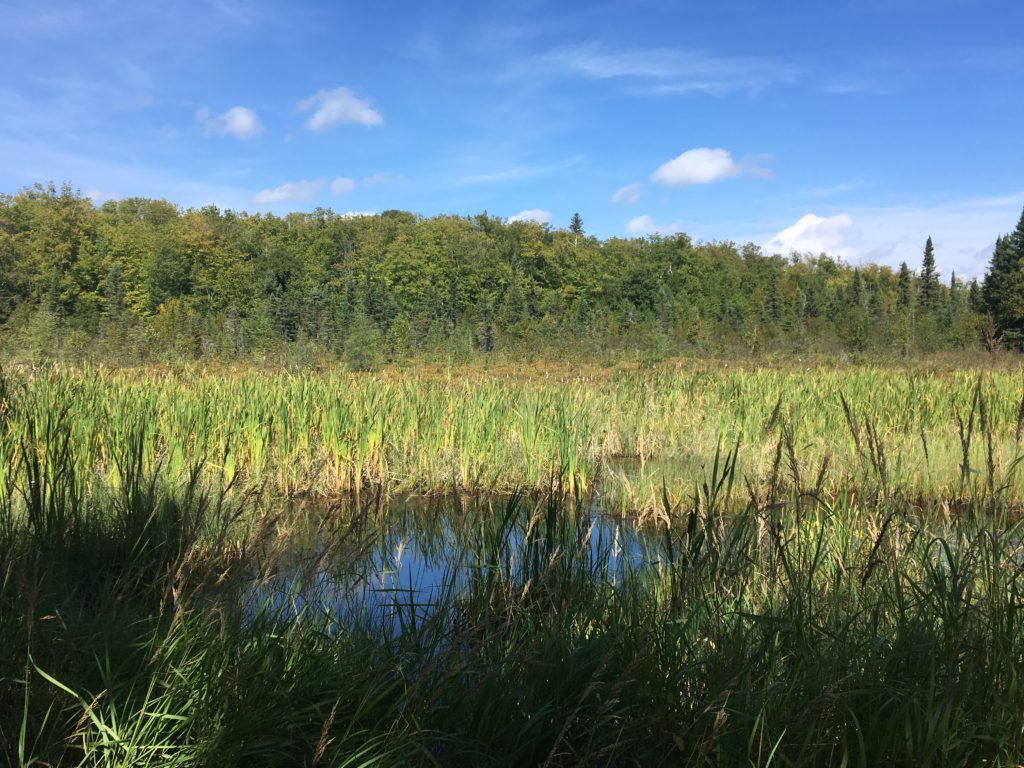 By the time I ate my beef sticks and drank water in the hot mid-day sun, it was past 1pm, over 6 hours in and just more than 18 miles on the day. I kept truckin’, and passed a big family in the pine stands just past Sugarloaf Road. I was eager to get to one of my favorite overlooks on the way to the Caribou River, but definitely felt a little post-lunch fatigue coming on. I blitzed through the wonderful traverse overlooking Great Lake Superior, and arrived at the Caribou River before long. It was a tough walk ahead, and I was nervous about the impending storms. It was such a beautiful day, such a beautiful four day stretch, how could it turn nasty now?? I wrote in the trail register right before the bridge over the Caribou River. A mantra that I felt was never more fitting:

“We’ll cross that bridge when we come to it. Take it one day at a time and we’ll make it there.” 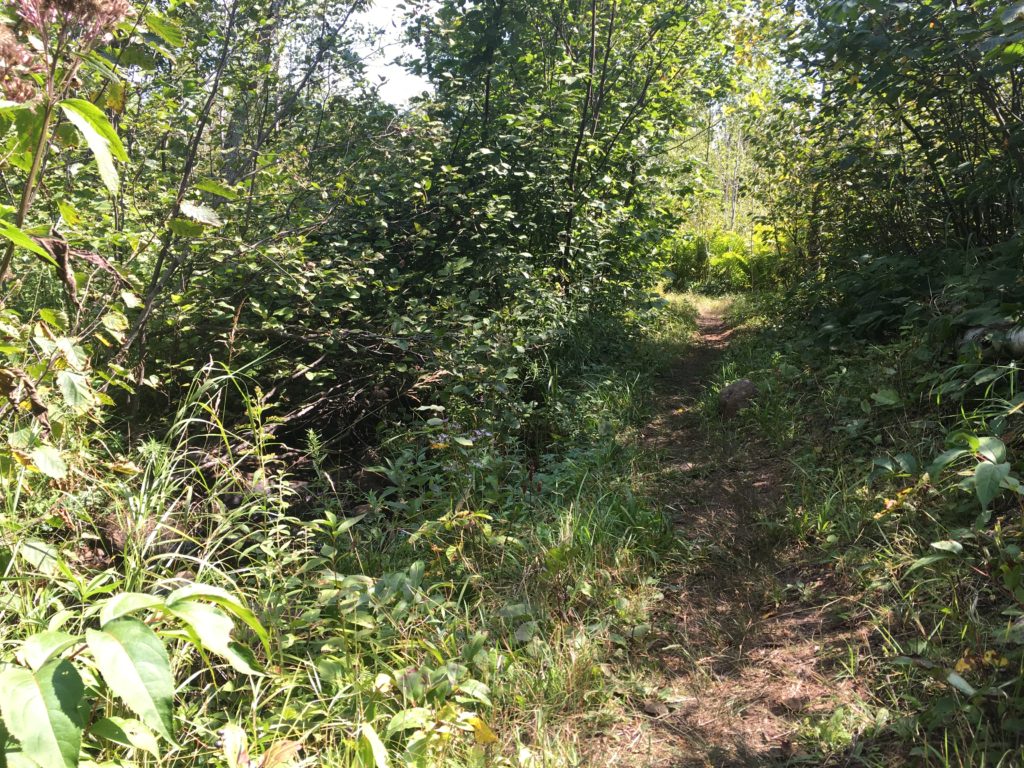 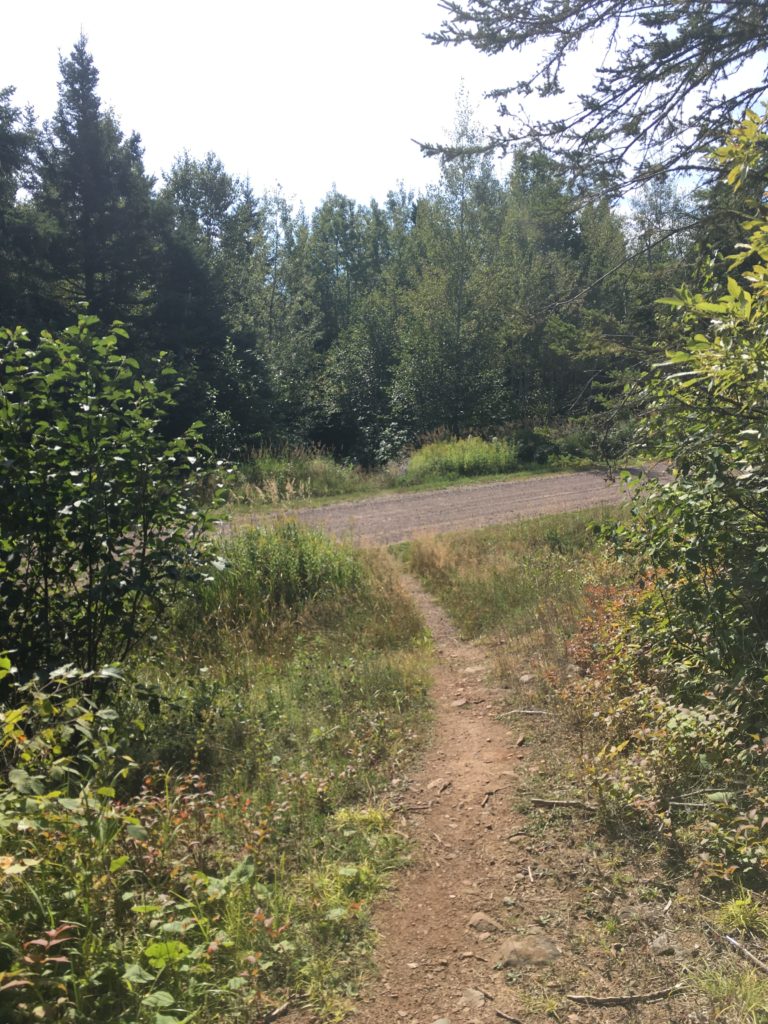 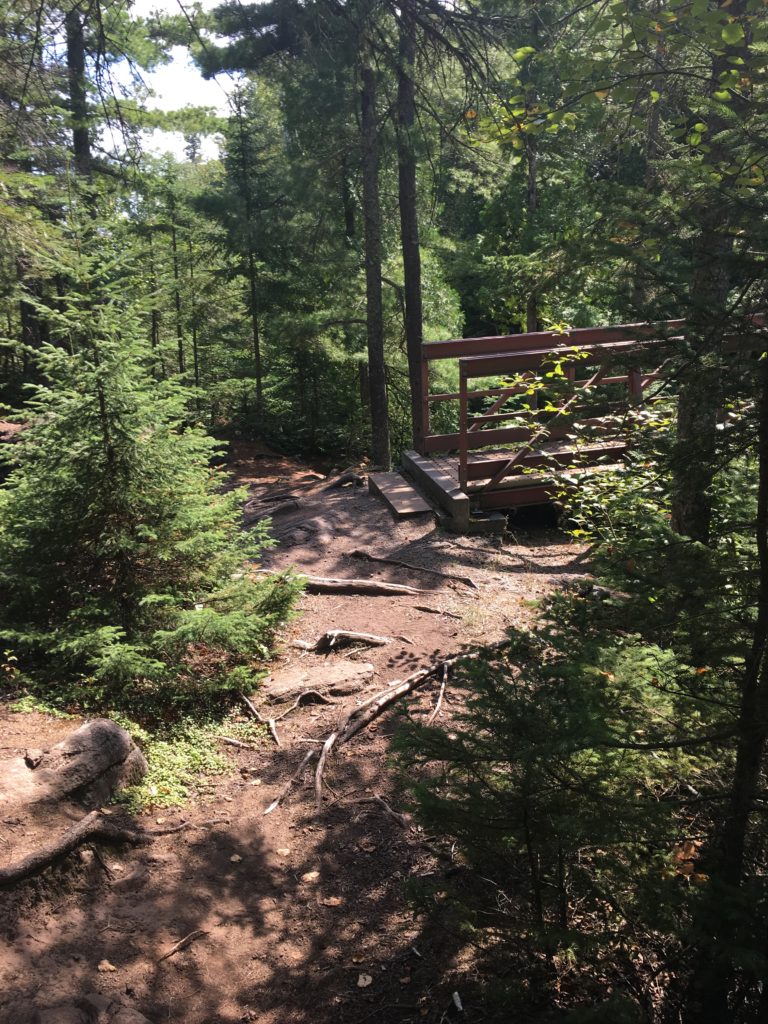 By the time I was hiking out from the Caribou River, I was about 7 hours and 20 minutes in on the day at about 22 miles, right on track. Almost 3pm, I knew I could push hard and make up some good ground for my 4:20pm rest break. It would be a hell of a push, and it started with the big climb up to Horseshoe Ridge. I didn’t remember it being such a grueling ascent. I definitely smelled bad, but noticed it only as the sweat soaked through my shirt. The fatigue had set in already, but I found a point where I could keep walking very strongly despite any discomfort in my feet, ankles, shins, knees, hips, back and shoulders. I saw another hiker as I made the last steps up and over Horseshoe Ridge.

I braced myself for the long few miles through Crosby-Manitou State Park. I remembered these sections as very difficult, but I knew that once I got to the parking lot and through the park, it’d be a relatively easy jaunt to my campsite. There was a lot of up and down, just as I recall, and the trail is just so technical in this part. You never get into a good hiking groove. Luckily, this is a cool section with a different vibe every 15 minutes. Before long, I crossed over the roaring Manitou River and kept my eyes open for a nice spot for a well-deserved rest. 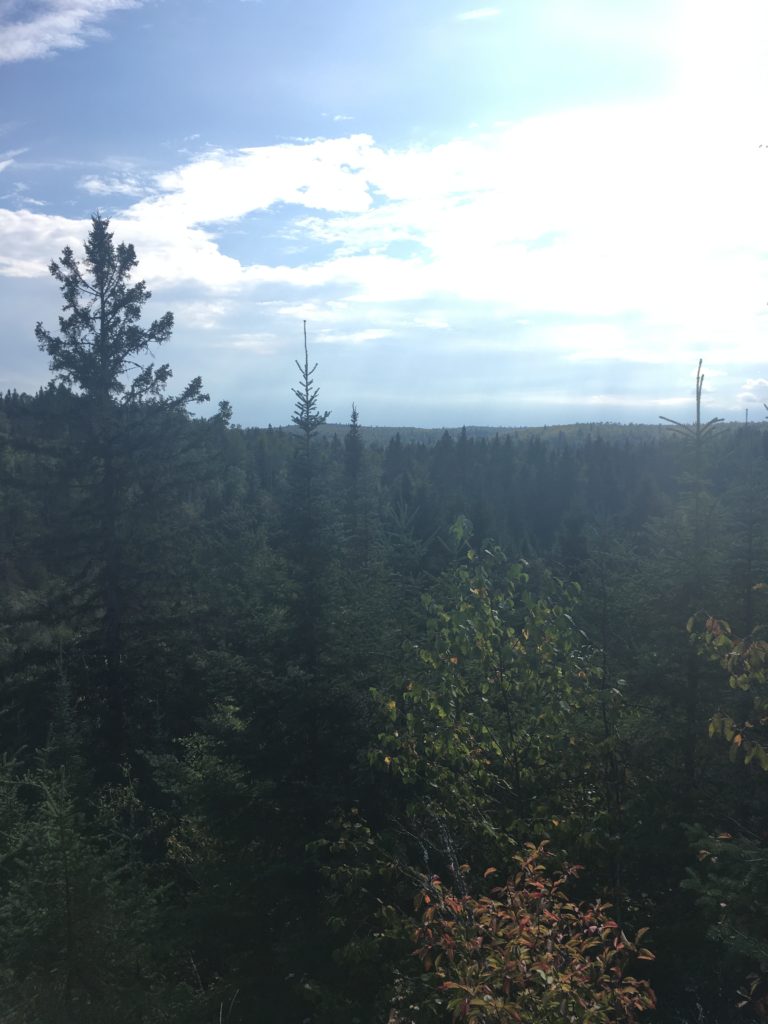 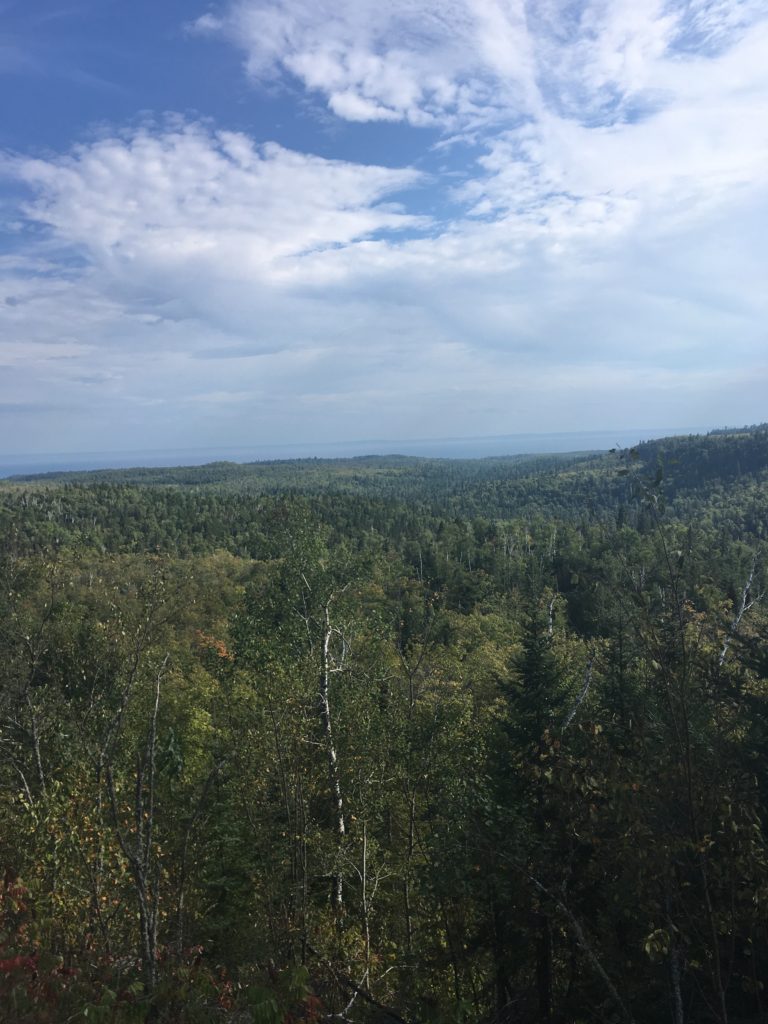 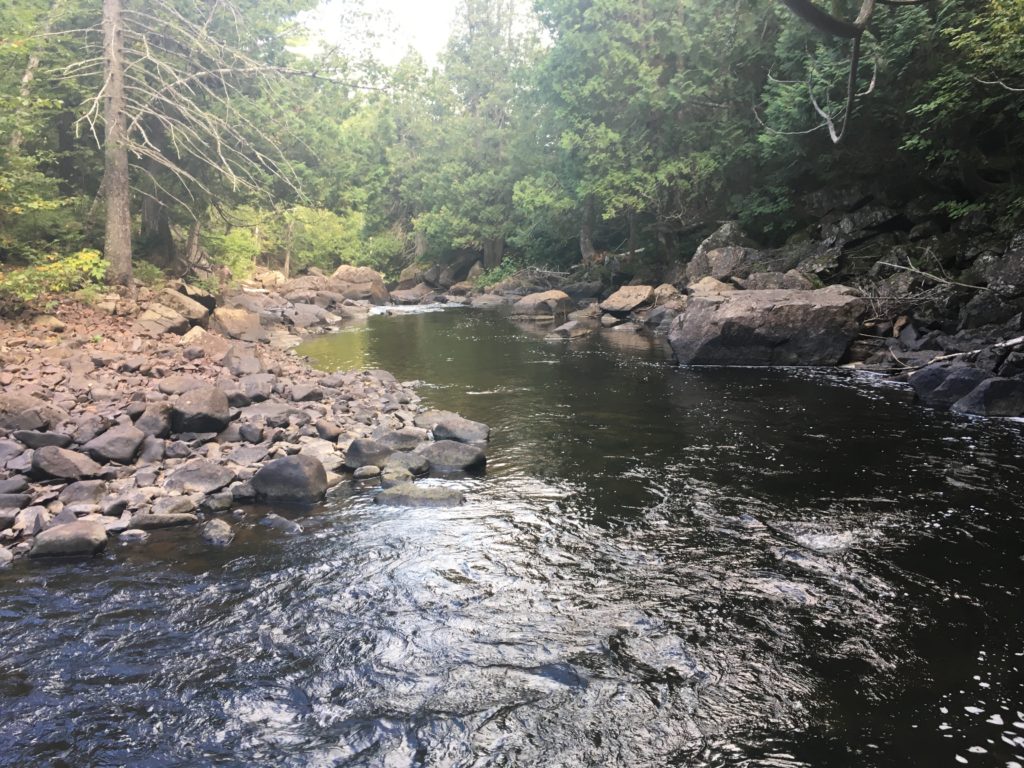 I made my way through the state park trail, past a few backcountry campsites, up out of the river and back, and snuck off trail to a rocky bend in the Manitou. I took a fantastic break there, very satisfied with my progress on the first day of the crux. I didn’t take more than 10 minutes, but it was enough to eat a bit of food, let my feet rest, and continue hiking with a renewed take on life. I was ready to smash this last section, get to camp and hunker down for this rain coming in. It was quick to the parking lot. I felt ragged, but kept on walking. 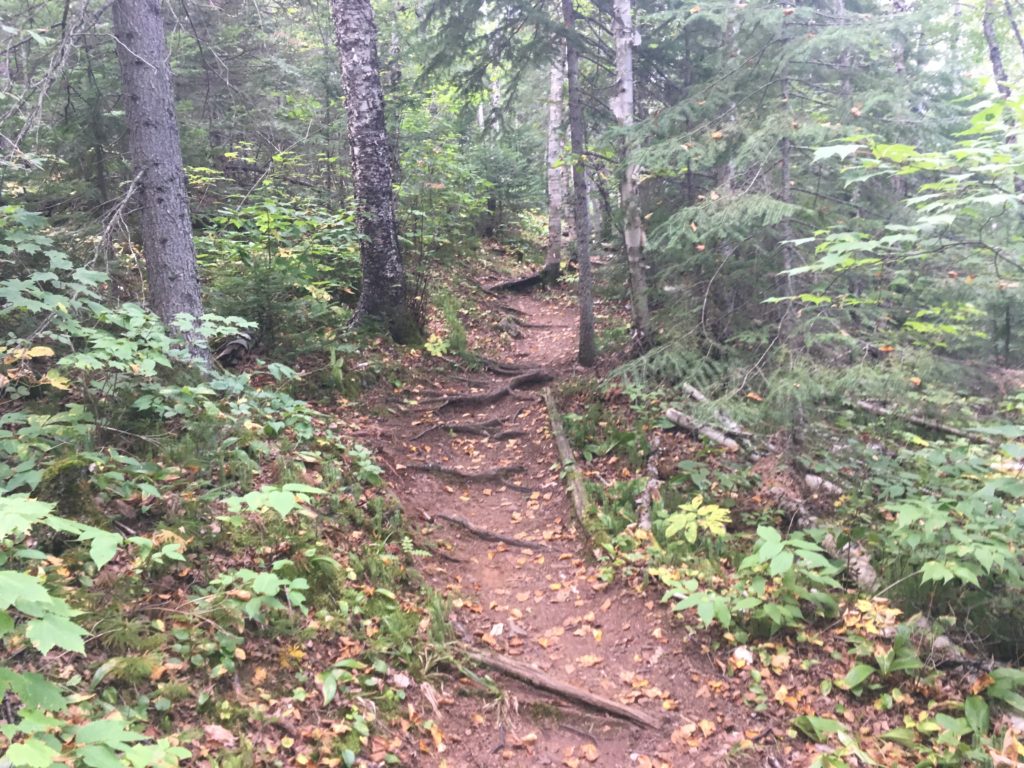 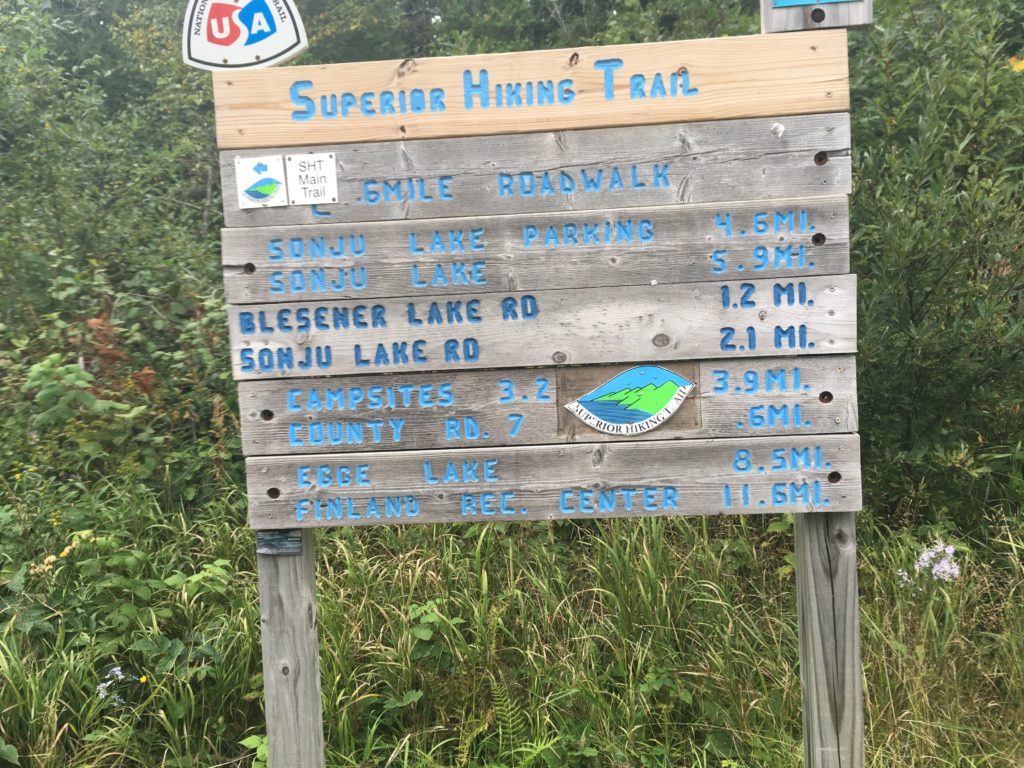 Back into the woods, I made a point to push until I arrived at my site. I felt a few rain sprinkles and decided to quick stop after all. Sprinkles did not cease, so I pulled out my rain poncho for easy access. To my surprise, it was a passing shower after all, and the sprinkles quickly after the brief stop. I kept hiking. I considered stopping at earlier sites, but pressed on. A guy at an earlier site said he didn’t think it’d rain at all, but it was just wishful thinking. 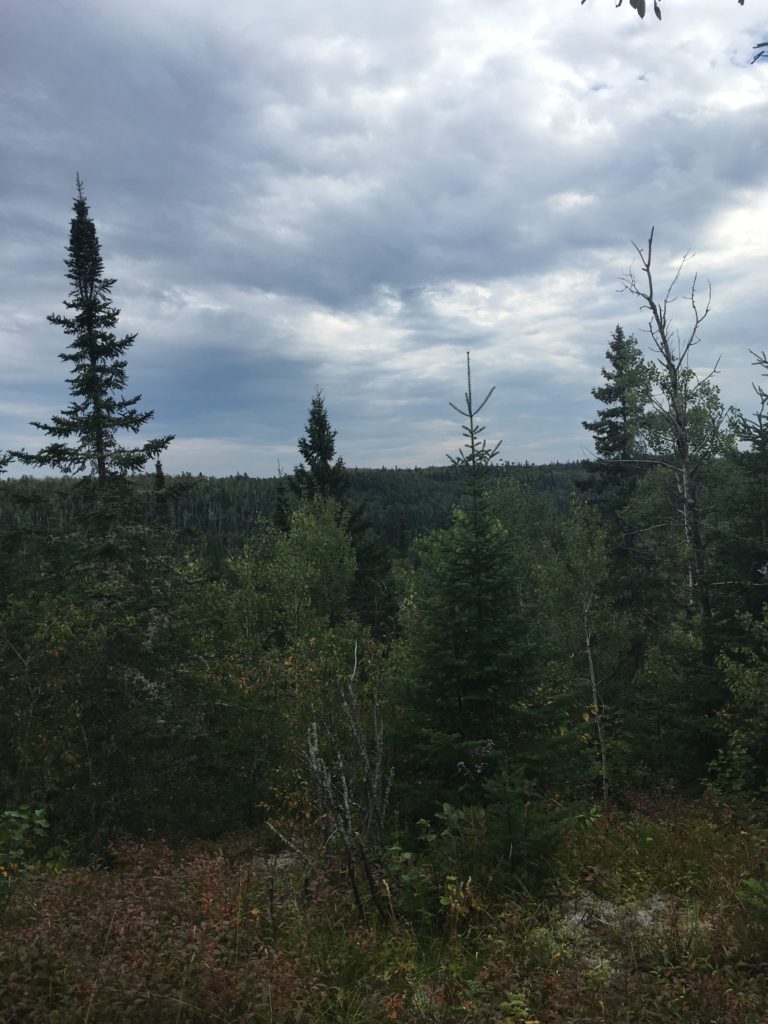 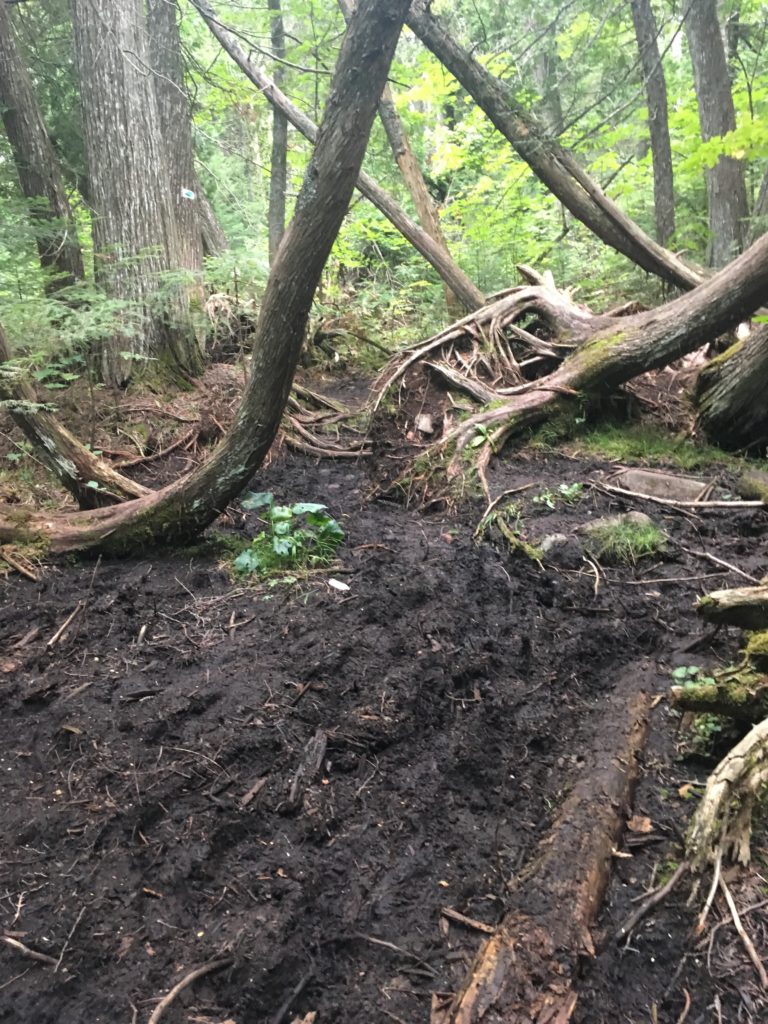 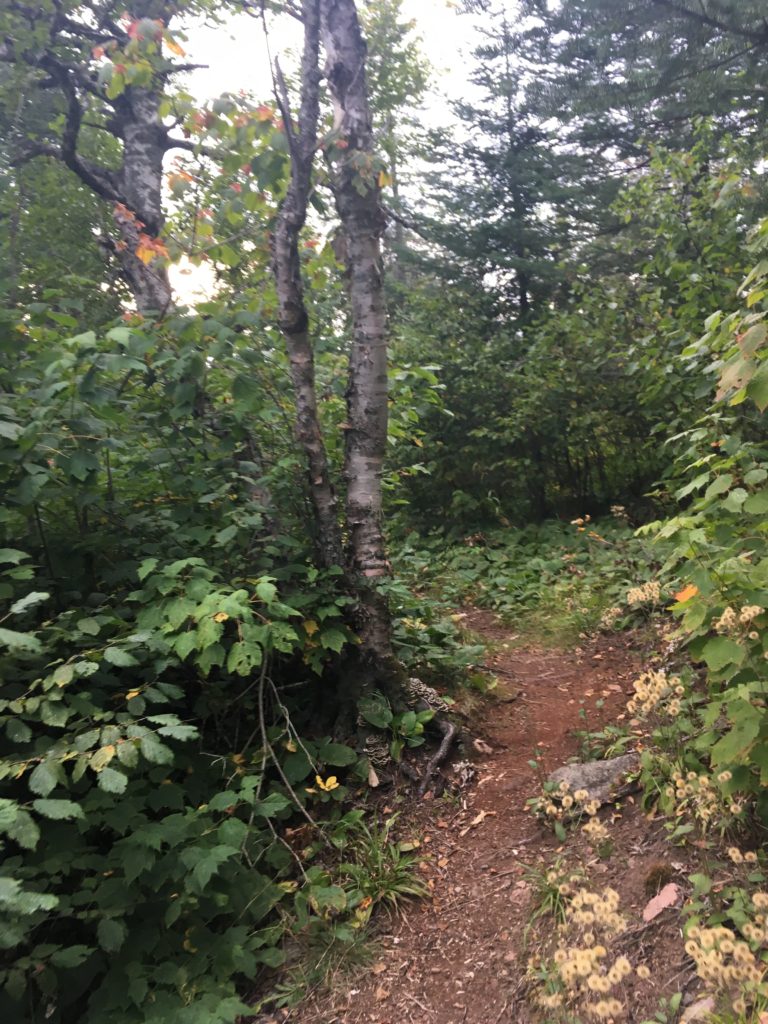 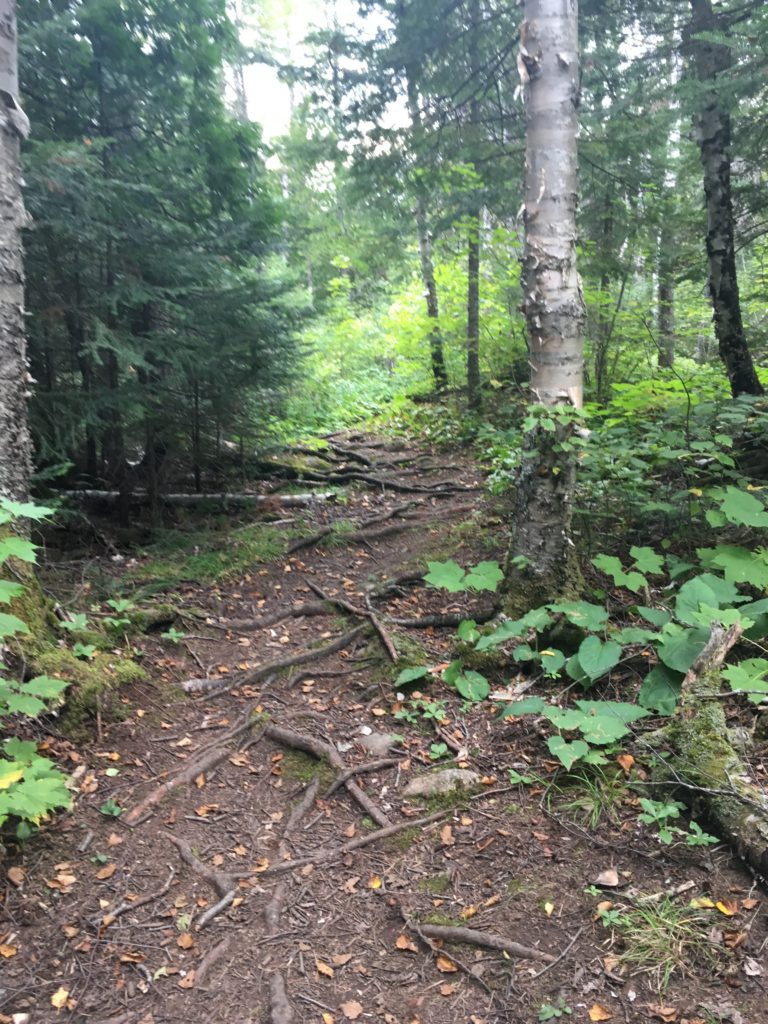 I passed a really cool campsite on Blesner Creek, and soon after arrived at my target campsite on the East Branch Baptism River. It was very relieving to get there and take off my shoes. The skies opened up a bit and it looked like it was going to stay clear for the time being, and I had plenty of daylight left–just past 6pm. I racked up a monster 33.3 miles on the day. A rustle came from a nearby hammock setup, and I chatted with my site-mate Diane for a bit. She was an ultralight enthusiast out on the trail, chiefly a Boundary Waters person, but getting into backpacking as well. It was awesome to talk with her and share my story and also hear hers. I enjoyed talking DIY gear with her, but she retired to bed early. I cooked my food over a roaring fire, soaked my body from butt down in the creek, and drank as much water as I possibly could. 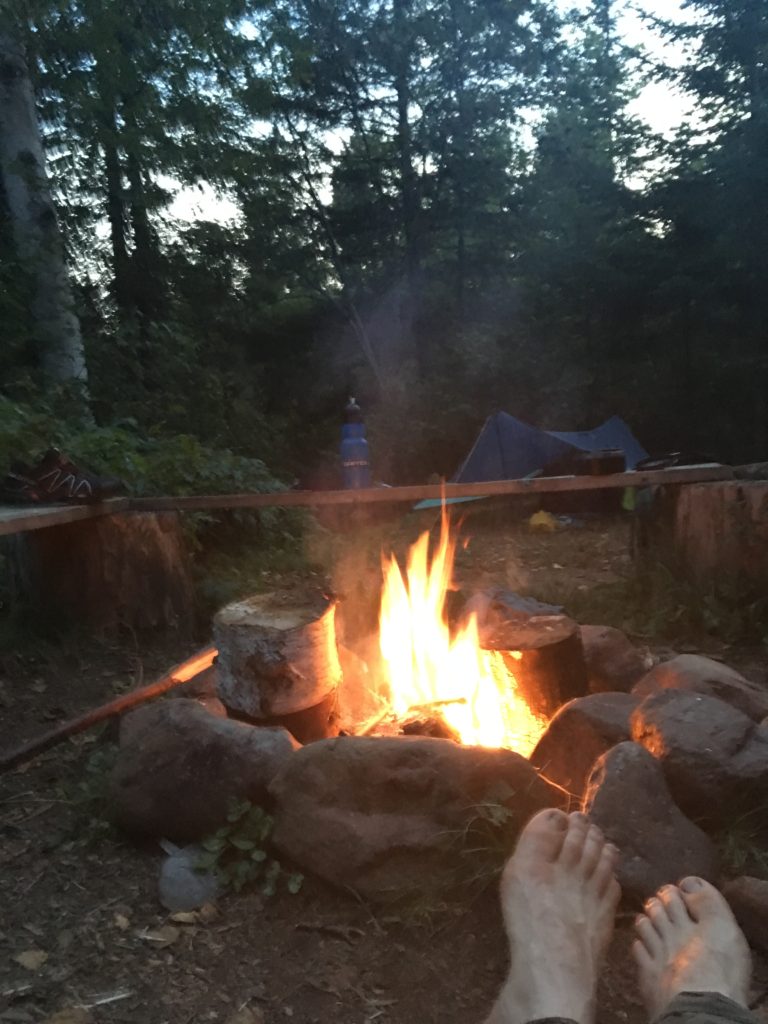 I took the risk of packing my bag up, food and all, and keeping it in my tarp area. If it was going to rain in the wee morning hours, I didn’t want to deal with a soaking wet pack and food. So I shimmied everything under the tarp and hoped that she’d keep the water out.