This is the first mulitsport race of the season, and it would validate whether or not the training is paying off how I expect it to. Having never done a duathlon before, I was curious how run-bike-run format would treat my legs.

It is hard to replicate a race atmosphere in training, and you can’t know how much harder you’ll push in a race versus alone in training. Leading up to the race, it was a steady build of consistent volume on the bike, and a somewhat steady high-volume run program from week to week. Since February, I’d been doing a lot of running, sometimes up to 12 hours a week, and the bike was more and more since that same time, peaking at almost 10 hours the week before Gear West. All of that volume really gave me some confidence go faster. Also, high volume training makes one so strong. Not in the typical sense (I don’t think I could bench press the bar), but strong enough to dig a big hole, be able to recover and still go fast. For instance, a few times in training, I’d feel so beat down, but then go for a long bike ride and just be dead, and THEN go for a run after. The next day we’d do a two-hour jog first thing in the morning, and 15 miles in the books like that. Boom, easy. That type of strong. Not a lot of sessions have been really that high of intensity, but the consistent volume pays dividends, that is for sure. Key word consistent… I haven’t had an exercise week less than 10 combined hours swim, bike, run since February.

That is why I was so desperate to go out hard on the bike at Gear West and see how I could hold on for the second run. I had been testing my vastly improved run speed on a few different occasions, but didn’t know where my bike speed was at. I expected to go a little faster, but I really knew that the bike and run volume would help me not die. I’ve had at least a few races where I push a little, tiny bit too hard on the bike or the run or both, and in turn, my pace on the run is majorly compromised. I think that with high volume training, that “flux room” to push a little, tiny bit too hard is widened significantly, and the amount that I will inevitably slow down on the run is significantly less.

I had a few goals going into Gear West. I wanted to crack top 5. That is a tough goal, however, because you never know who will show and what sort of shape they’re in (especially with the early season races). My second goal was 1:17. My training partners Nick and Ryan and I had a beer bet. Whoever guesses closest to their actual time gets free beer. My guess was 1:17 – 17 minute run, 40 minute bike, 18 minute run, and two 1 minute transitions.

I had been nursing a little knee injury that cropped up a week and half ago, but it was feeling good on race morning and I had been running on it still without too much trouble. Race morning was wet. Real wet. We racked up our bikes, dinked around a bit, and then a sudden downpour that would have been categorized as a flash flood in certain geographies screamed through. I scurried inside to simply wait it out until the start gun at 8am. A few minutes later, Nick and I warmed up a bit, and the rain had luckily subsided. The bike was ready to go and I was feeling good jogging around. Most of all, the adrenaline was pumping hard through by blood vessels. I was ready to race. 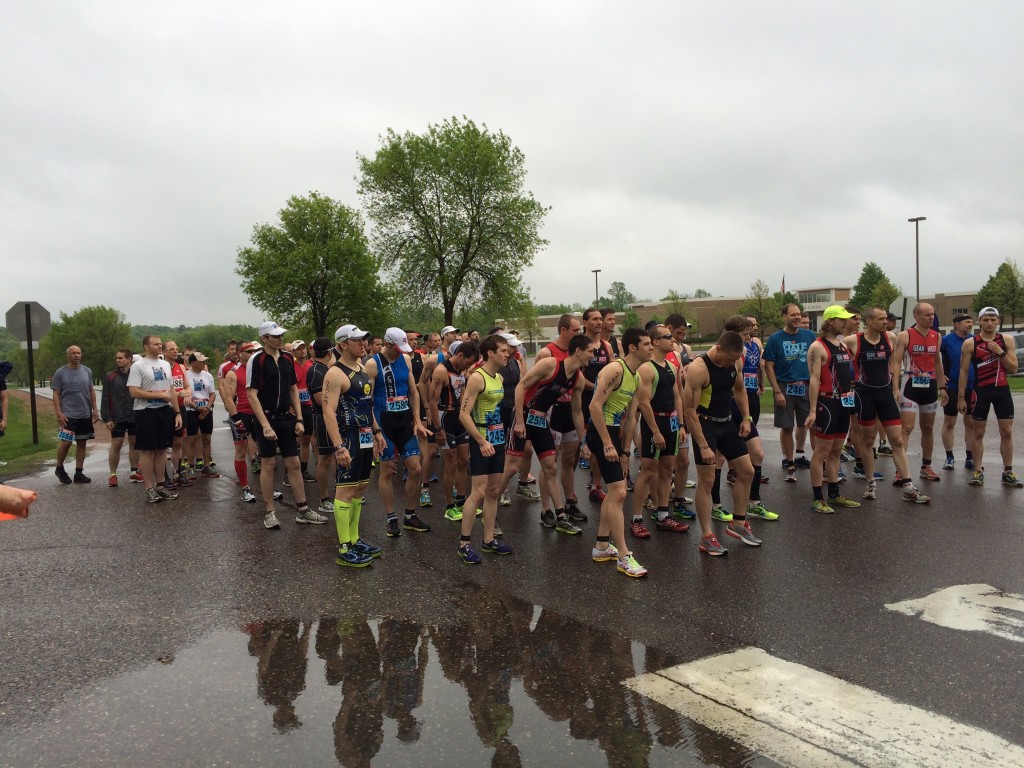 We lined up and I looked around at the dudes at the start. I recognized some, and thought that top five would be a long shot and the rest of the top 10 is a crapshoot how people will place. “GO!” through the megaphone meant that we should start running now.

A few guys took off FAST. Nick and Brian Sames were behind me for some reason, but pulled out ahead pretty quickly. A pack of 8 dudes started to pull away pretty quick. I didn’t feel like I needed to hang, so I sat in my spot. 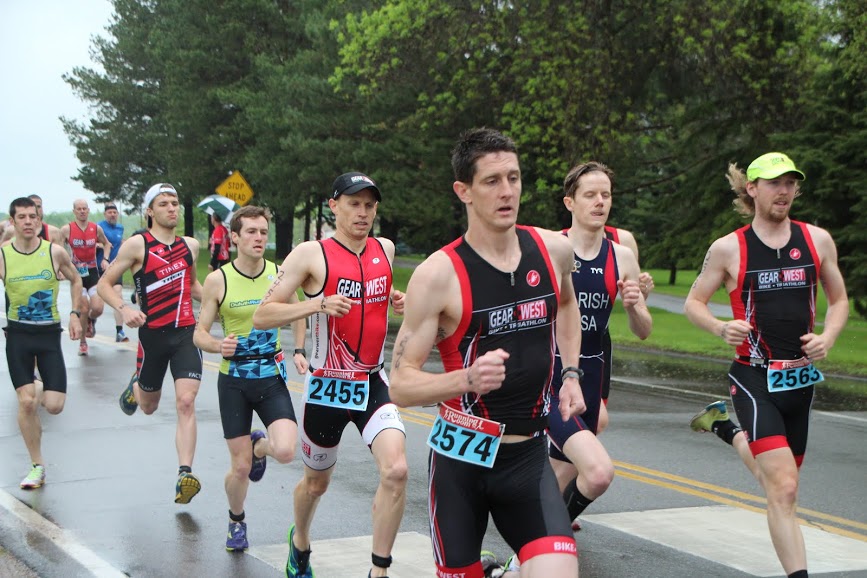 The run course was twisty and turny, grassy and soggy and wet, and really slippery. My race flats were probably not the best shoe option, but they were fast enough on the gravel and road portions that it made up for the slipping and sliding. The front pack with Nick and Patrick Parish leading was pretty far up, and I was running with eventual second place Matt Payne and some other guys. I was definitely breathing pretty heavy but I felt like I made up some time on the technical trail parts. Matt pulled away at the T1 chute and I left transition with him and Dan Hedgecock. 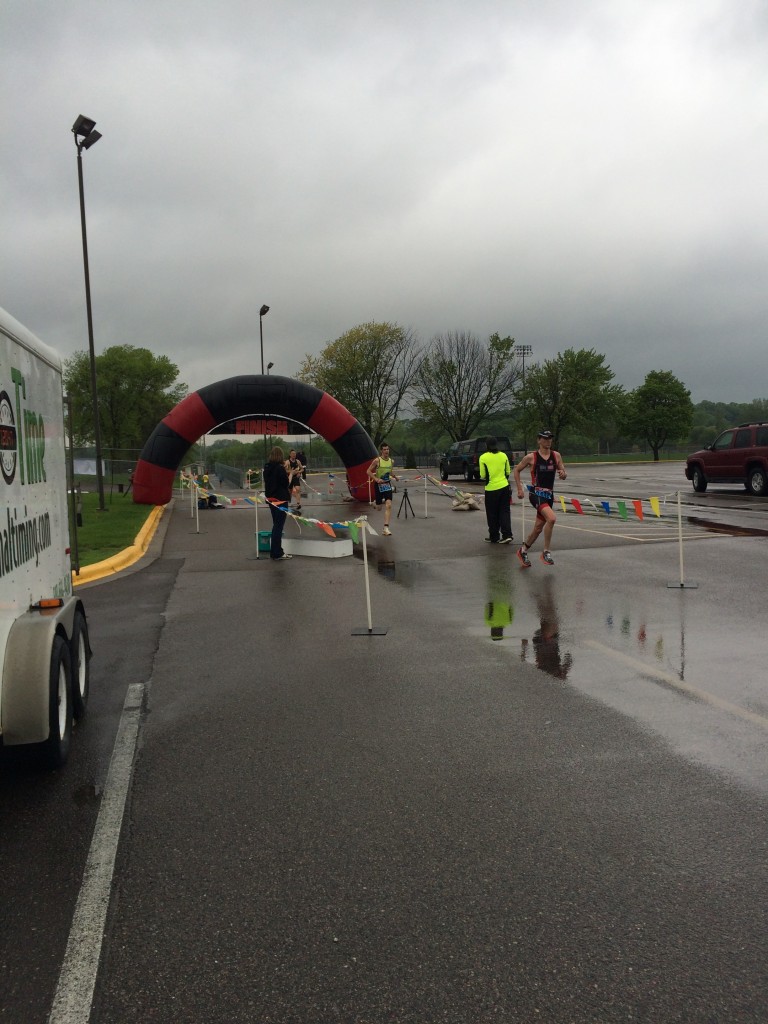 Getting on the bike was quick and flawless. Perfect. I cracked a big ol’ smile once I started pedaling. I remember thinking that this is it! Payne pulled away pretty damn quick and was accelerating into the downhill turns, whereas I was in my horns with my fingers on the brakes. The rain made me very timid and I didn’t want to slip out going 16mph. (Let alone 25mph!)

After five minutes, I got my bearings under me and felt more in control of my bicycle. I could see some guys ahead of me, which was motivating. A quick glance over my shoulder and there was nobody to be seen. Weird, I thought, that Dan hasn’t zoomed past me. I passed Nick while crushing it up the first big uphill. There’s one match I just burnt, I thought. After that, I didn’t have any contact with other athletes for the remaining 14 miles. 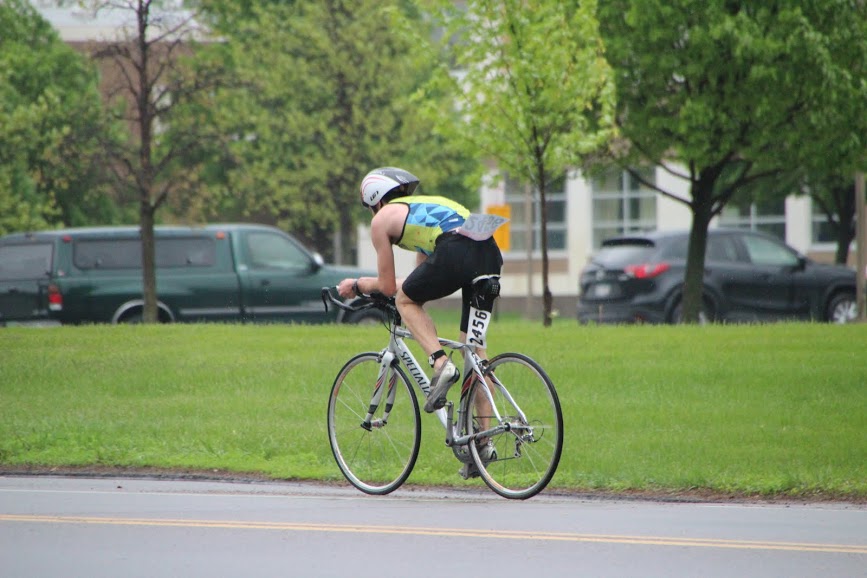 That ride was a power ride. I was crushing it up the hills, staying in aero position and spinning a high cadence on the uphill stretches, and generating some very powerful full circles on the flats. I tried to stay as aero as possible. I slowed down a lot to eat a gel, but it was worth it, I think. I burned a lot of matches on that ride, which was exactly what I should have done, in retrospect. Cranking up a hill to the point where the quads burn and the legs are in pain made me think whether that was a match I just burnt and if I’d pay for it on the run. I could see someone farther ahead the whole time, which helped me to bike faster–a constant goal or something to look towards. I ultimately realized it was Brian Sames up there.

Coming off the bike, I was right where I wanted to be for my time, and could have been in 5th place according to my premonitions. I slipped my running shoes on and was surprised by the jelly legs feeling. It was almost funny, like laugh out loud funny. 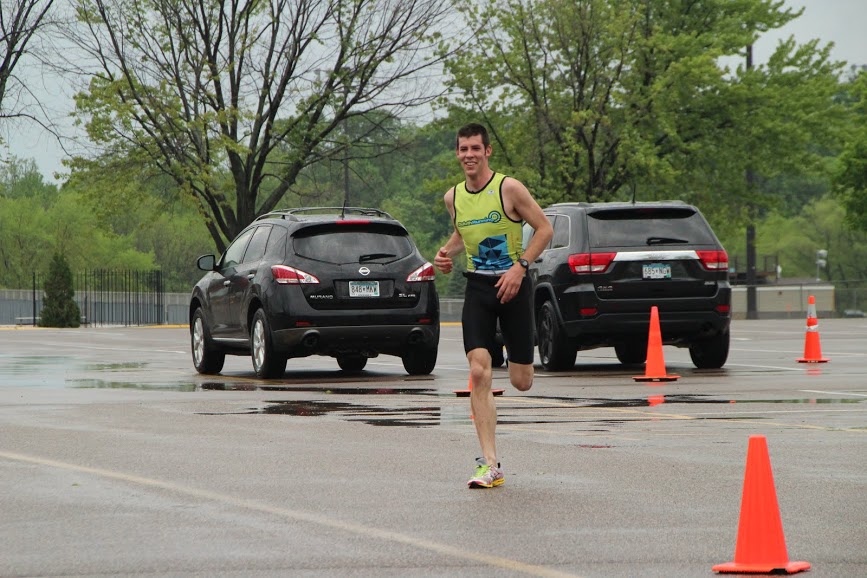 I tried to get a good cadence right off the bat, but it felt like I was running on wooden stilts. It was then when I saw Brian running away from me. He’s a stud runner and I knew that I wouldn’t pass him. Were there any other slow runners ahead that I could reel in? Probably not, I needed to fend off the fast runners like Dan and Nick. That became my motivator–don’t get caught! 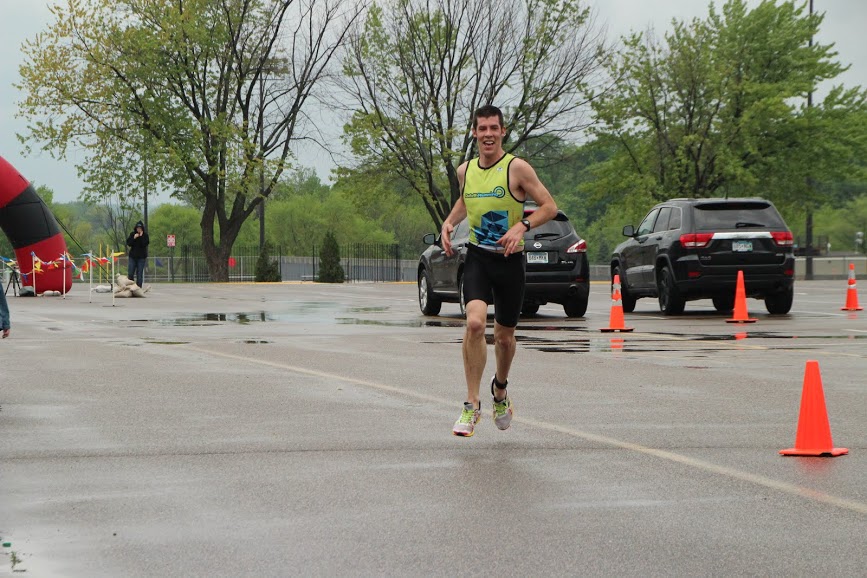 After 5 minutes, my legs felt back to normal and I just tried to hold a sustainable but uncomfortably fast pace. I was pretty much by my own self, so it was a little harder to pace and race without another runner nearby. I nervously tried to catch a glance behind me at any given chance. 10 minutes in, I knew the finishing order was set. I wasn’t catching Brian or anyone else, and I was safe unless I broke both of my legs in the slippery mud and had to crawl home. Now it was about the time goal.

I slipped up the big hill on the run and my quads felt like beef jerky, but ran hard the last half mile to the finishing chute. I glanced at my watch, 1:16:57 or so. Perfect. I hauled ass in and realized that I was in 5th place with a time of 1:17:13. Perfect! 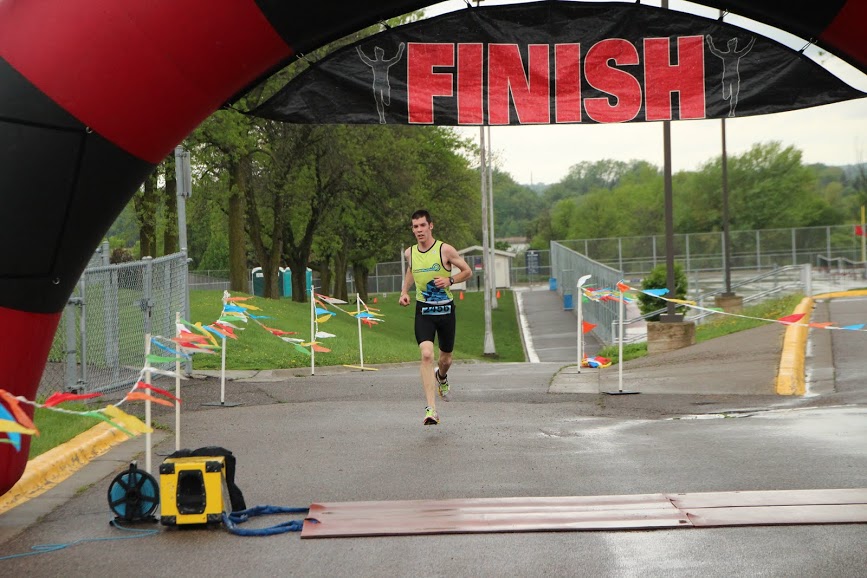 What a great first race of the season, good for fifth place overall and second in my age group. This certainly validated my training efforts, and I am excited to refine my training even more. The big volume base gives me plenty of options for refinement and it is all paying off now. The Gear West Duathlon was meticulously produced by Final Stretch Events, despite probably the worst weather possible. (During the race and after, the wind was wreaking havoc on the arches and fencing and awnings and everything). Next up is a solid training block leading up to Buffalo Olympic, Capitol City sprint, then funneling right into Grandma’s Marathon. 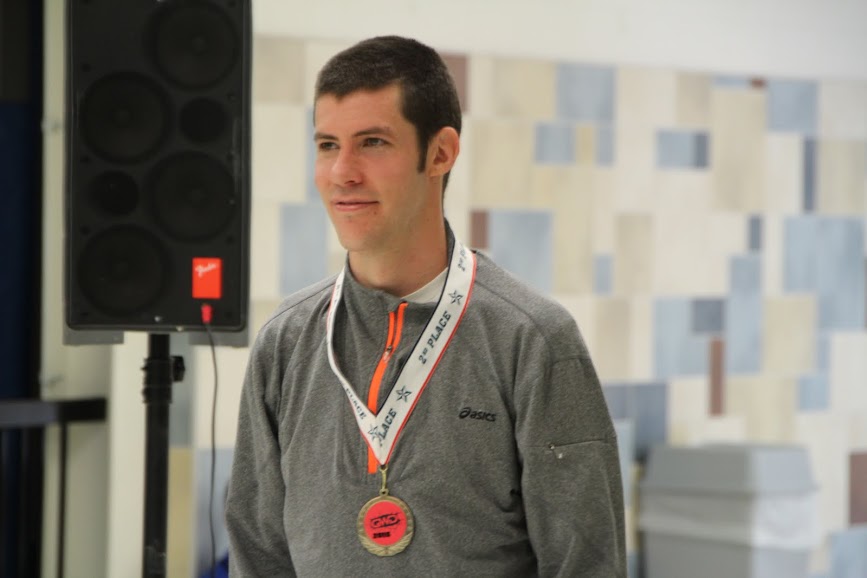 1. Boil 2 gallons of water.
2. On the other burner, mix all honey with half gallon of warm water.
3. When the brew kettle is boiling vigorously, add all malt and hops.
4. Boil for one hour.
5. While boiling, continue to stir both pots–ensure brew kettle doesn’t burn the bottom and gently stir honey water to dissolve.
6. Sanitize big mouth bubbler.
7. Combine 1 gallon of cold water, the wort from the brew kettle, dissolved honey water, and all apple juice in the big mouth bubbler.
8. Stir vigorously to oxygenate the wort. Add campden tablets and pectic enzyme.
9. Seal bubbler and take gravity measure.
10. Pitch yeast.

3. Take the gravity and taste test.