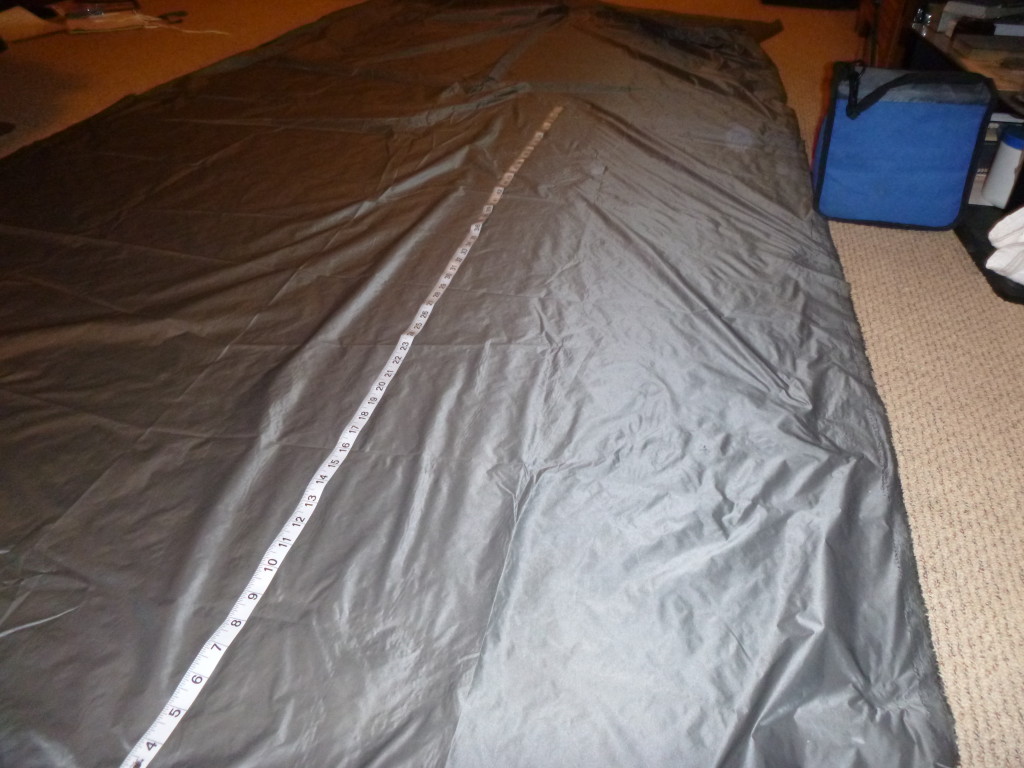 Sew a rolled hem along all edges of all four sections. 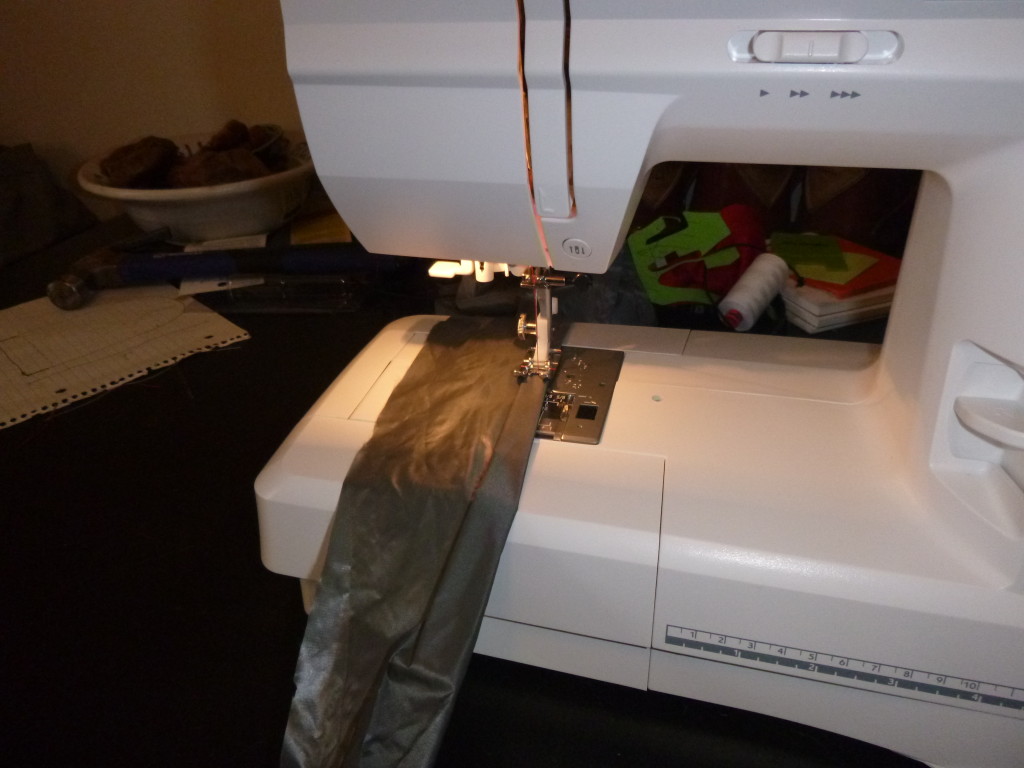 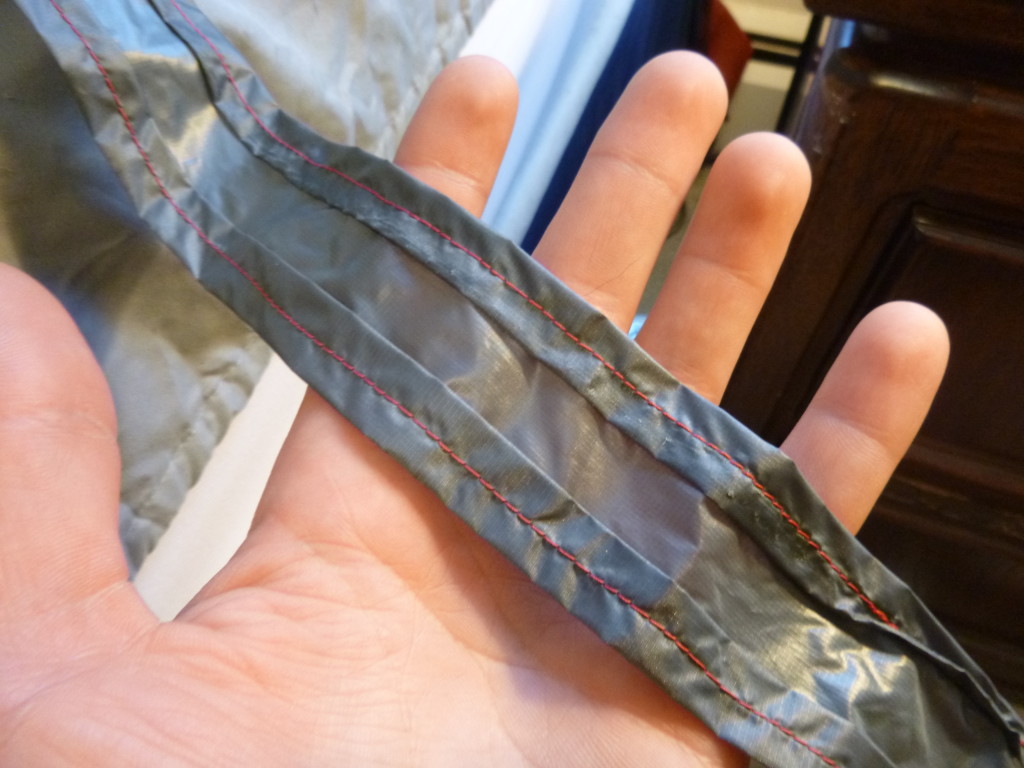 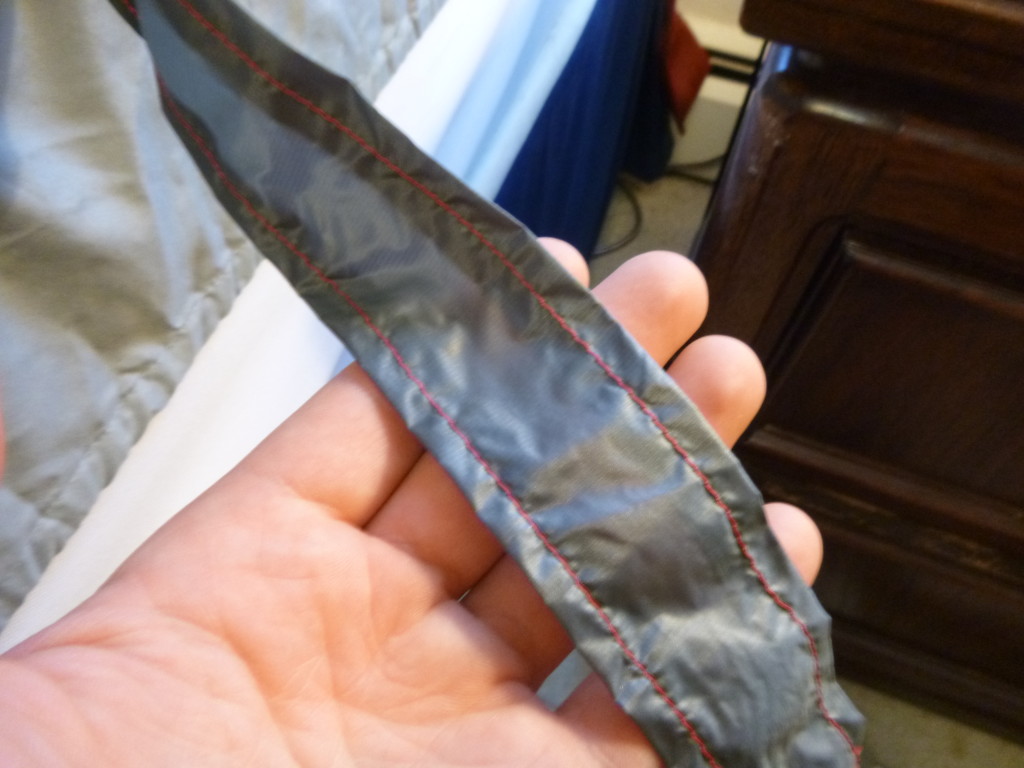 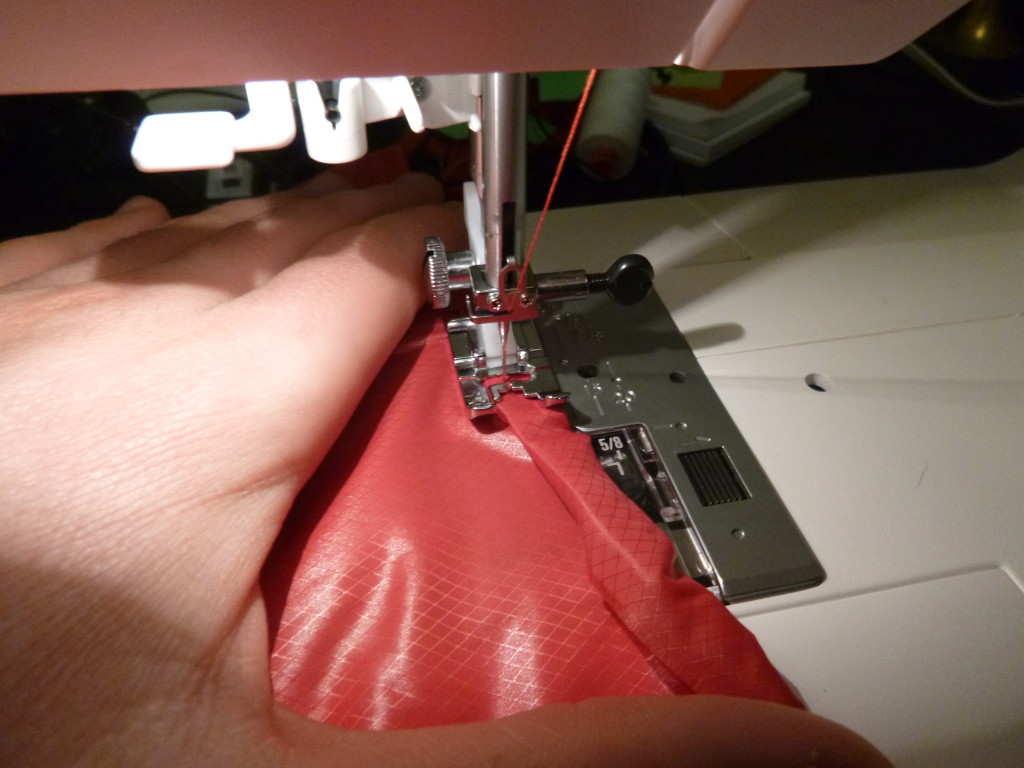 In the sewing machine, the insulation is against the machine. With calendared fabric, the outside side is the matte side, the inside side is the shinier side. Place the matte sides together. The 5″ channel is to be folded in half, with the fold towards the inside. Then layer, from bottom to top: insulation, red Diamond Ripstop (inside layer), folded channel, and grey Ripstop (outer layer). Line all fabric layers as close as possible without bunching up. Pin the two long sides first. Be careful to pin with enough room for the channel. If the channel is out of line, there will not be enough room for the paracord or it will simply miss the stitch. 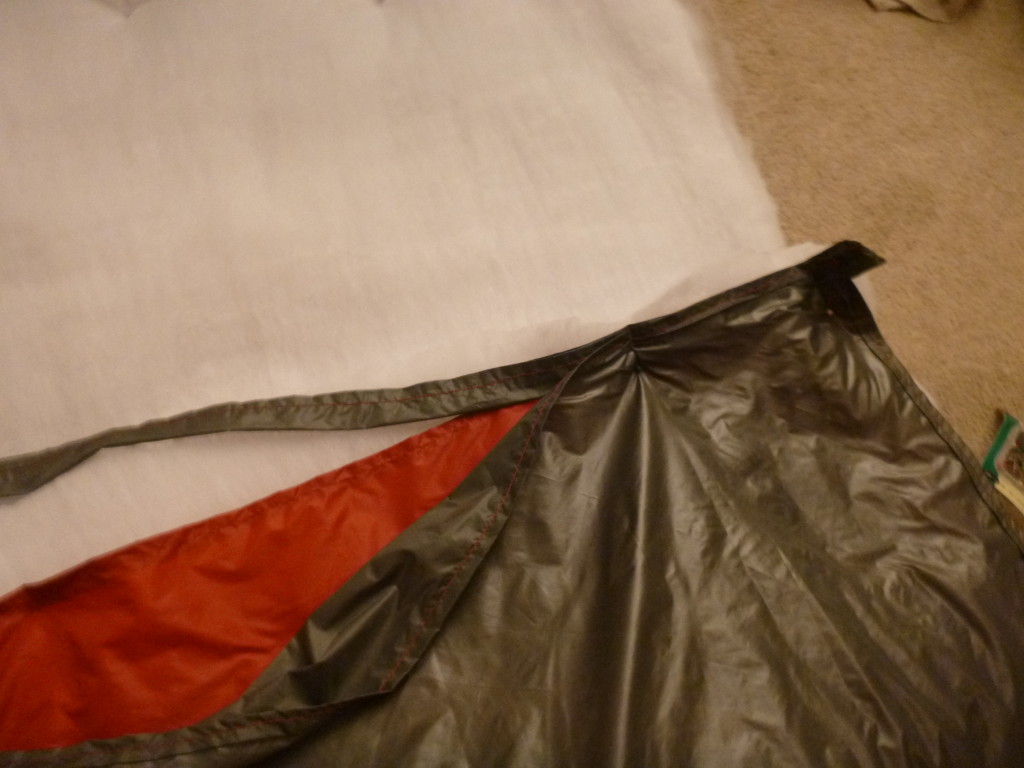 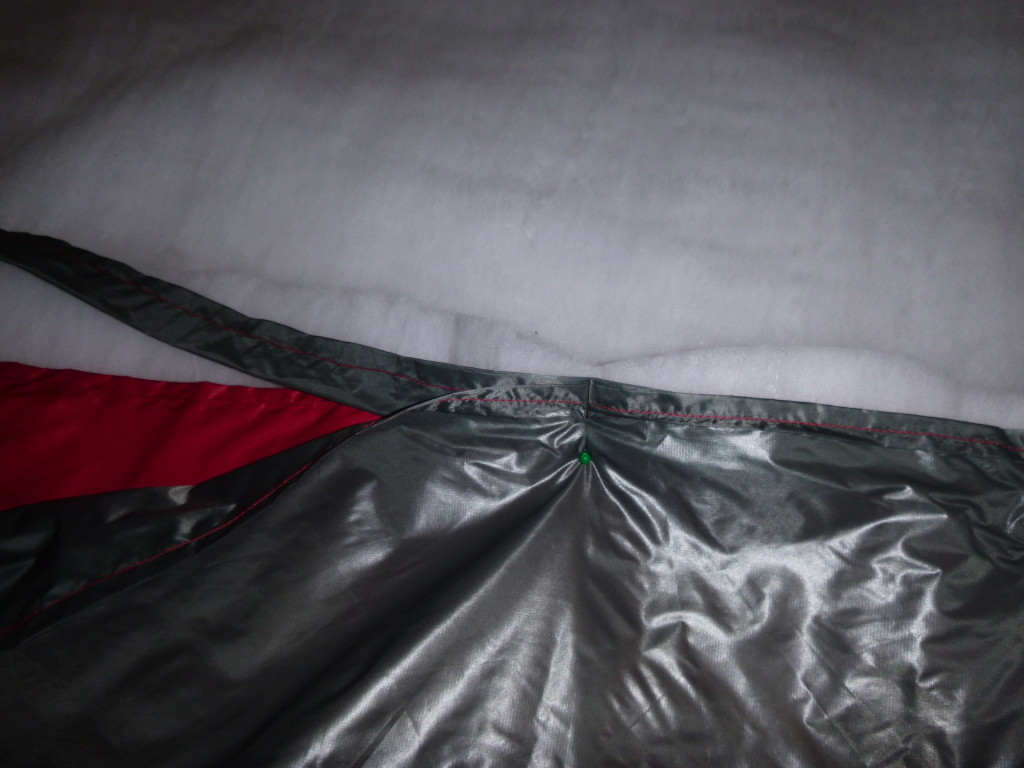 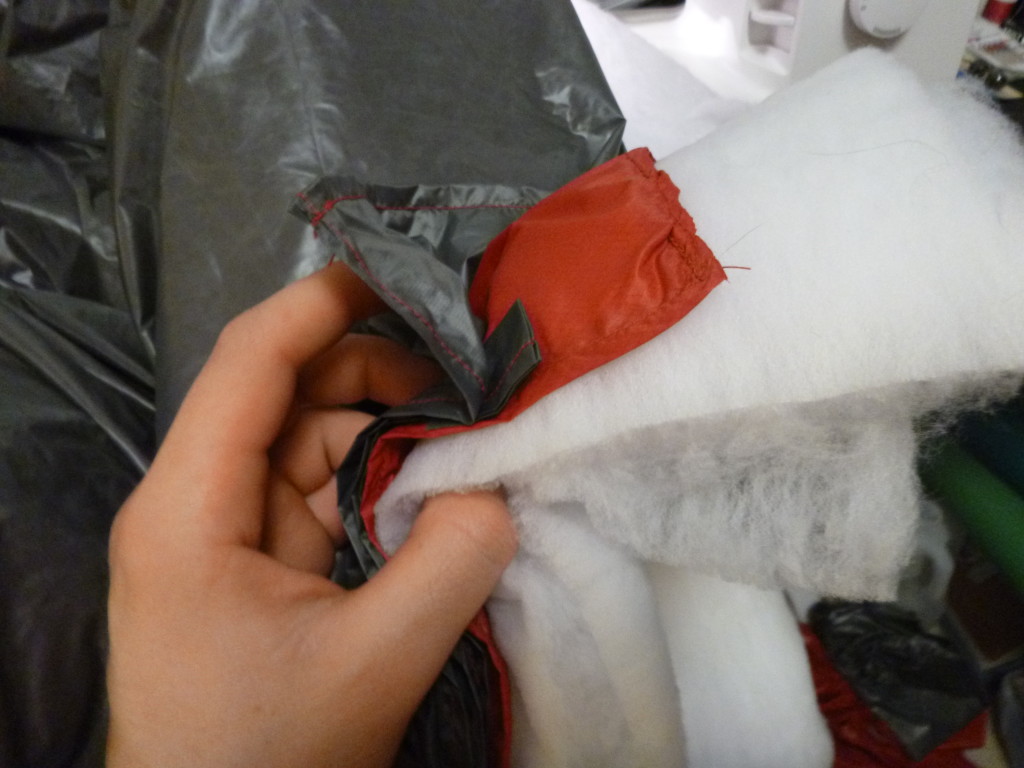 Sew one short side (foot side):

Run a straight stitch along one small side, careful to sew outside of the 2″ where the channel stops. If you accidentally sew the channel shut, the paracord will not be able to pass through!

Sew 15″ in from each side of the other short side (head side):

Starting from the top of the other shorter side, sew in 15″, leaving a break to flip the whole quilt right-side out. Then, starting 15″ from the bottom, sew down. 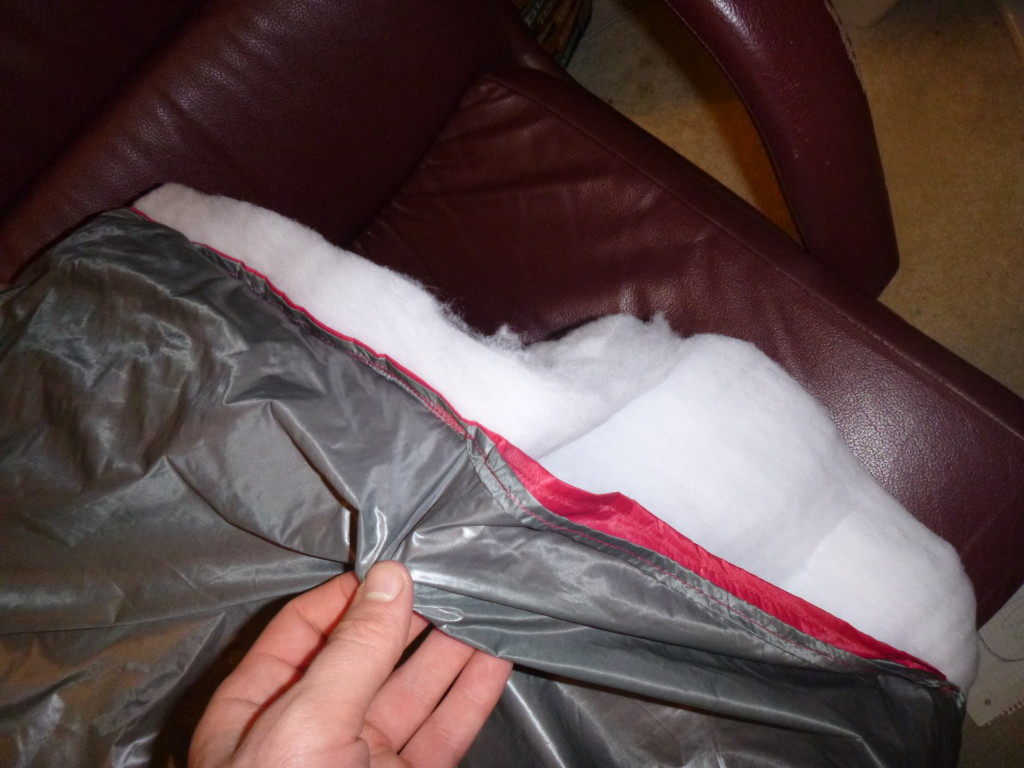 Make sure that the stitching looks nice and consistent, and that there are no big problem spots. Then, shove the entire quilt through the hole on the one short side to flip the quilt right-side out. Then, inspect the channel to make sure there are no major issues. 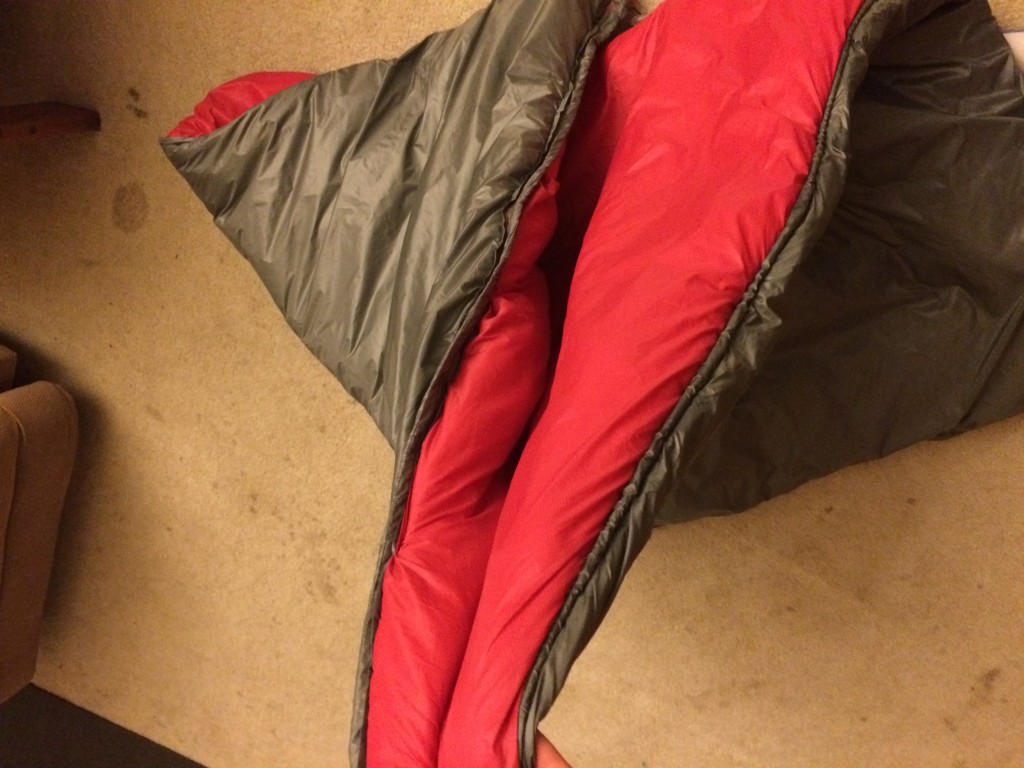 String paracord through the channel:

This was tedious at best… In hindsight,I’d make the channel, much bigger. At spots, the channel was no more than 1/8″ tall pulled taut–just wide enough to fiddle the paracord through. Also, when I flipped the ends of the channel back, I didn’t sew it to the sides, so there was open fabric that got caught on the paracord as I tried to get it through the other side of the tunnel. Eventually, I got both sides through and tied a quick stopper overhand knot to ensure it wouldn’t slip back through! 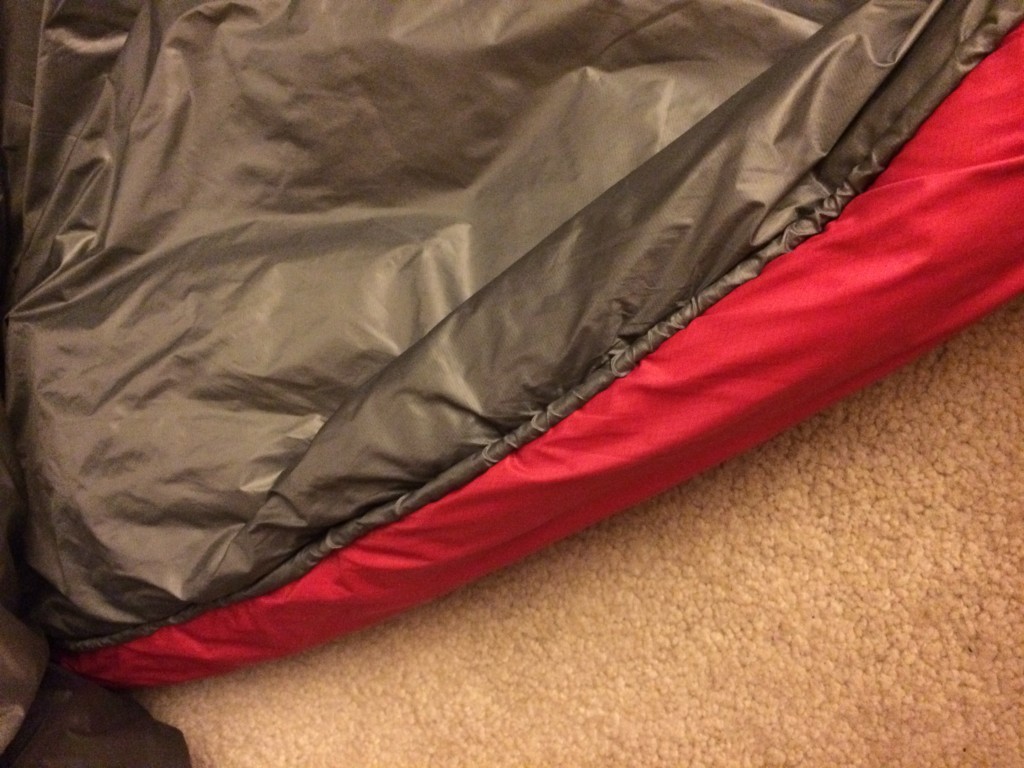 Mash the ends together and sew them closed. Make sure there are no gaps or holes and you can no longer see any insulation. I didn’t use any sort of special technique here, just try to match the sides so there is no bunching.

Measure and cut 2 strips of grey Ripstop Nylon 6″ wide by 44″ long. Measure 2- 45″ lengths of bungee cord. Sew a rolled hem on every side. 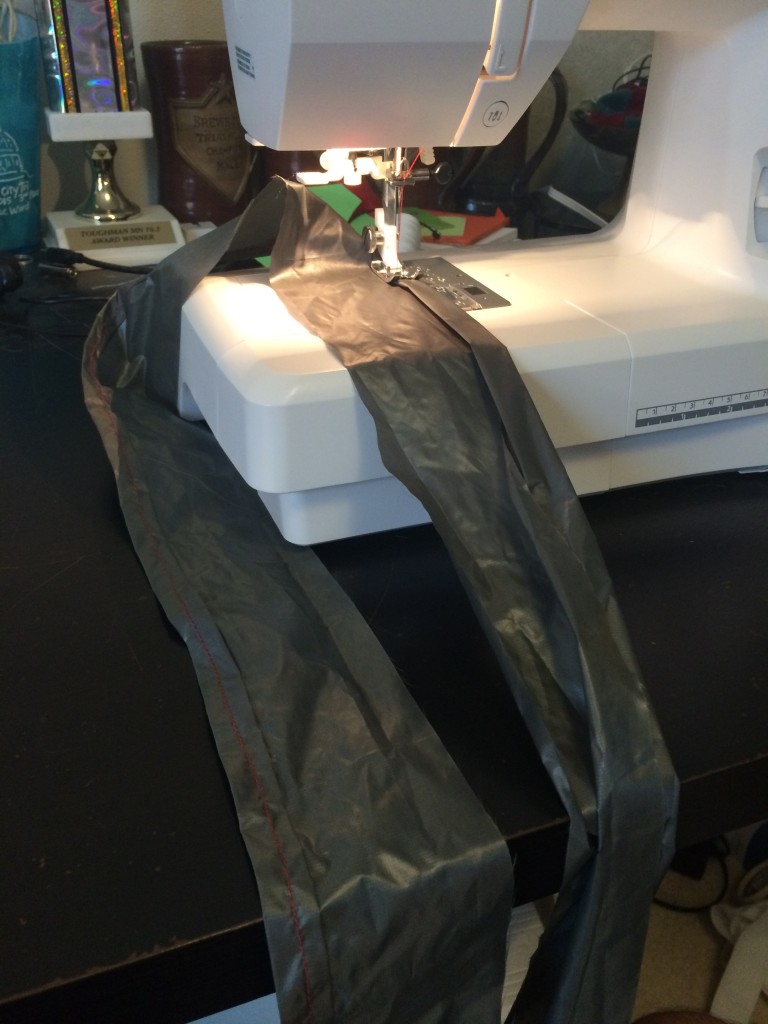 Sew in the bungee cords:

Fold the enclosure strip in half and place the bungee at pit of the fold, like a taco fold. Stitch as close to the outside of the fold as possible without going completely on top of the bungee cord. 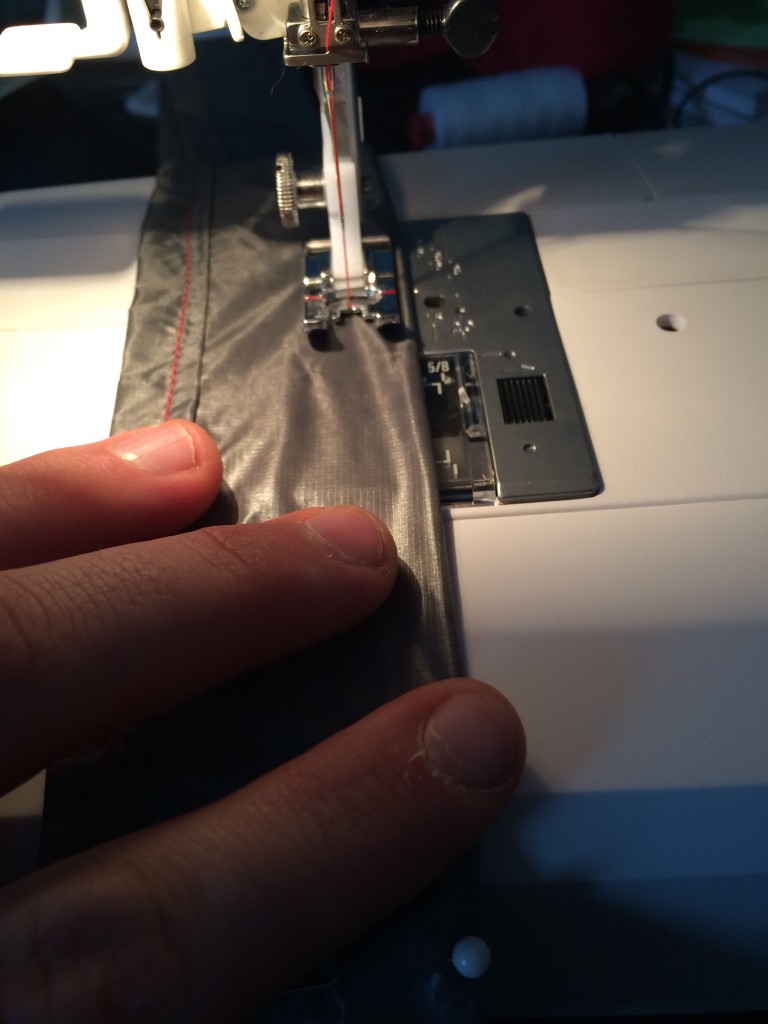 Make grommets at the ends, then scrap ’em:

Hammer in four grommets to the end of the enclosure so the cord can pass through. Prepare to pin the cinch cord enclosure on to the quilt. Here is where I realized the grommets were not the right way, so I scrapped ’em! The bungee cord runs by the grommet on its way out, hence, no use for the grommets at all.

Pin and sew cinch cord enclosure on the quilt:

Wrap the enclosure strip stitching down, around the short ends of the quilt. Aim for the direct center, where the bungee cord is sewn in, to be directly on top of the quilt seam. Then, sew it on! 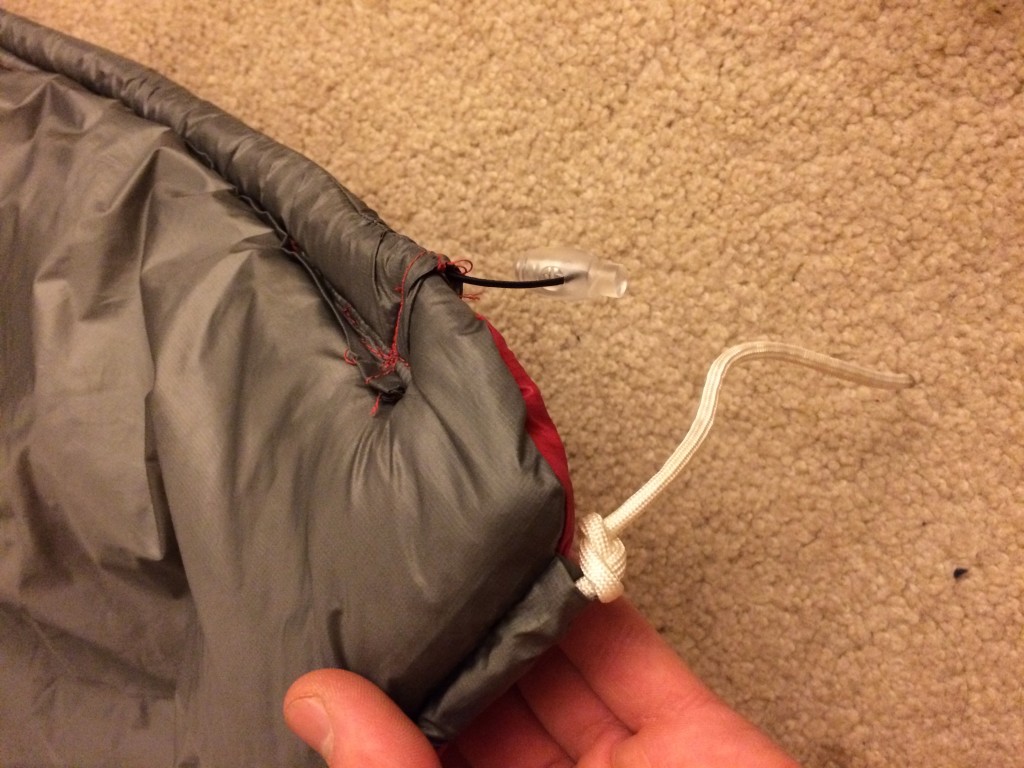 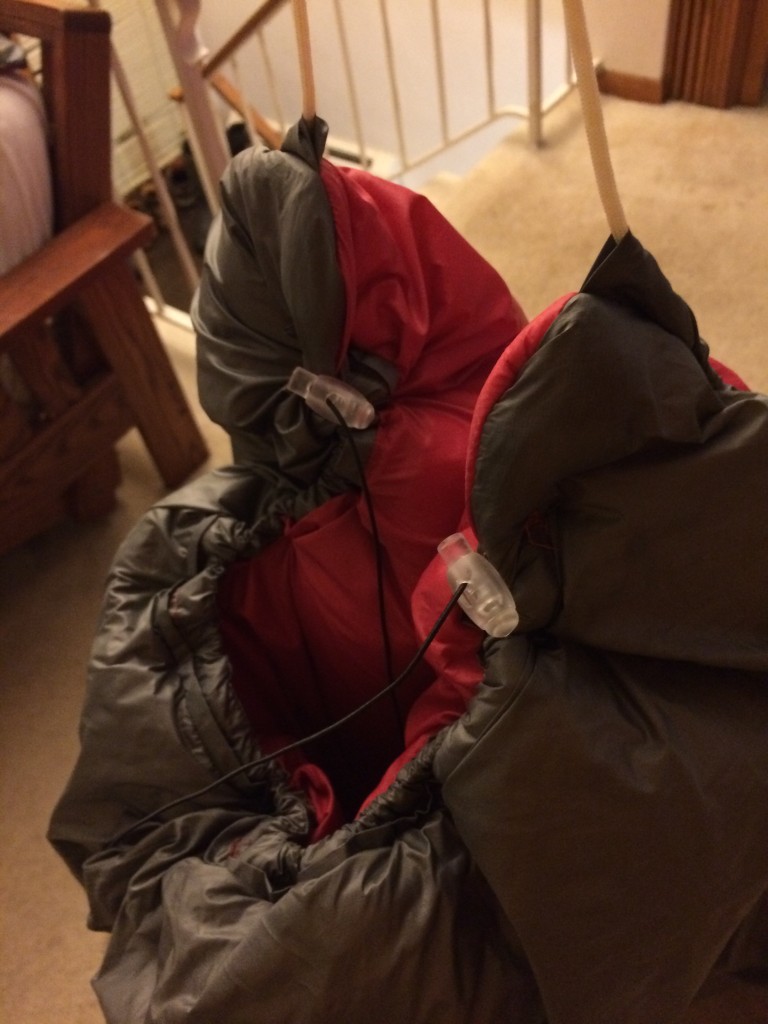 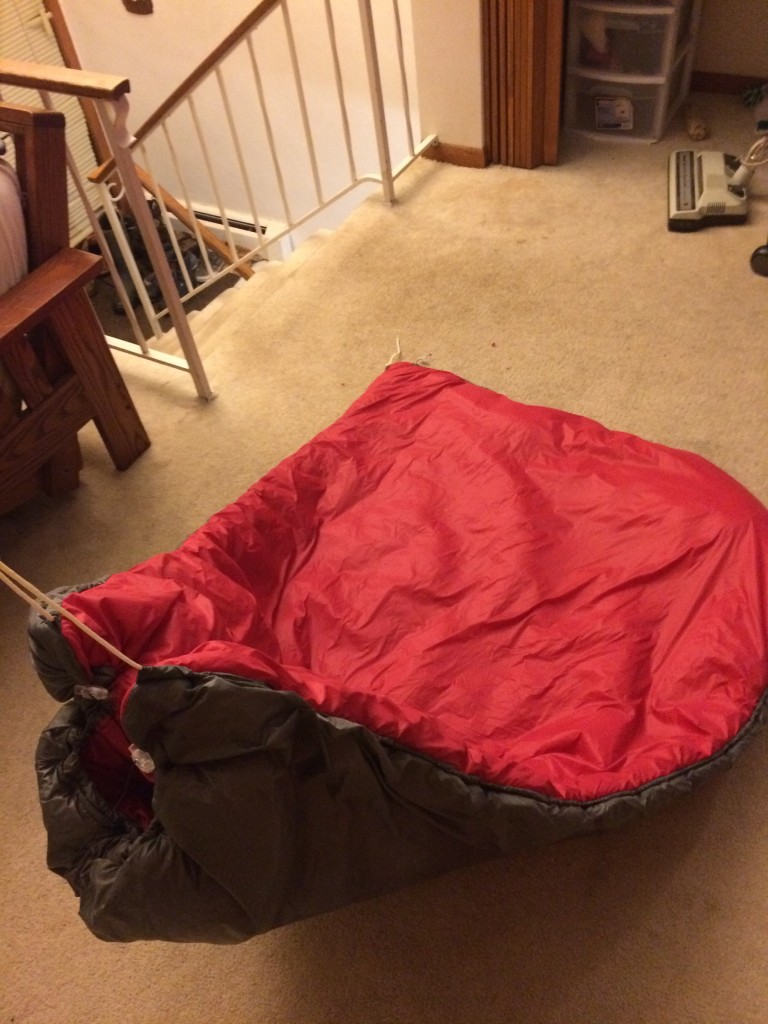 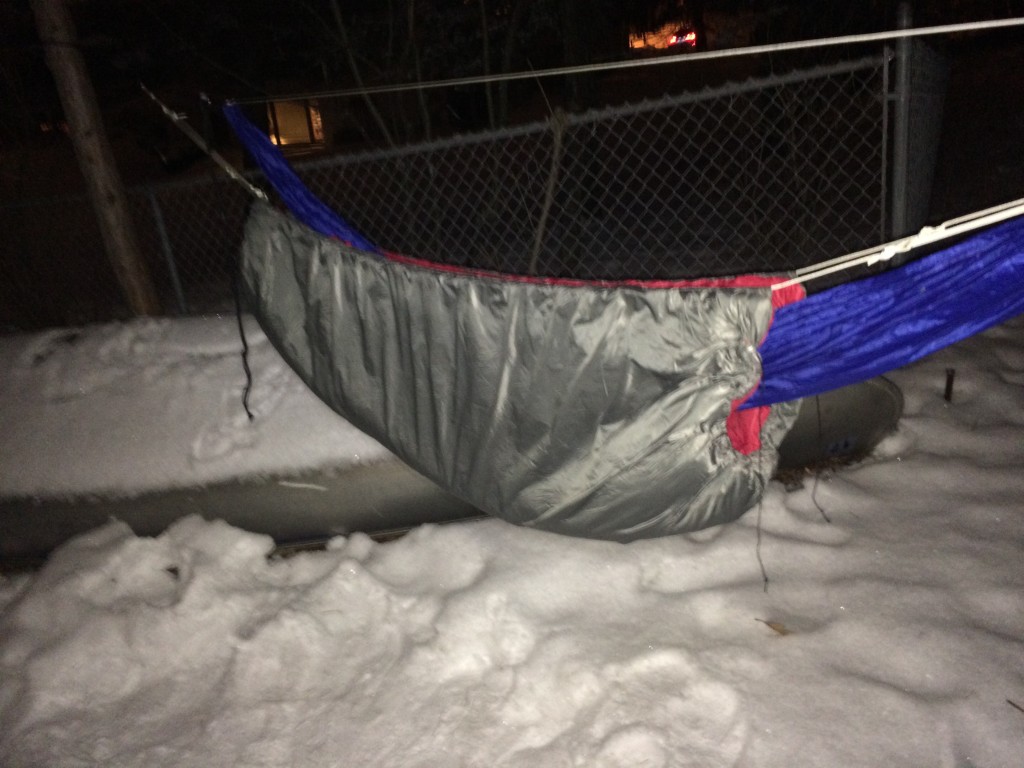 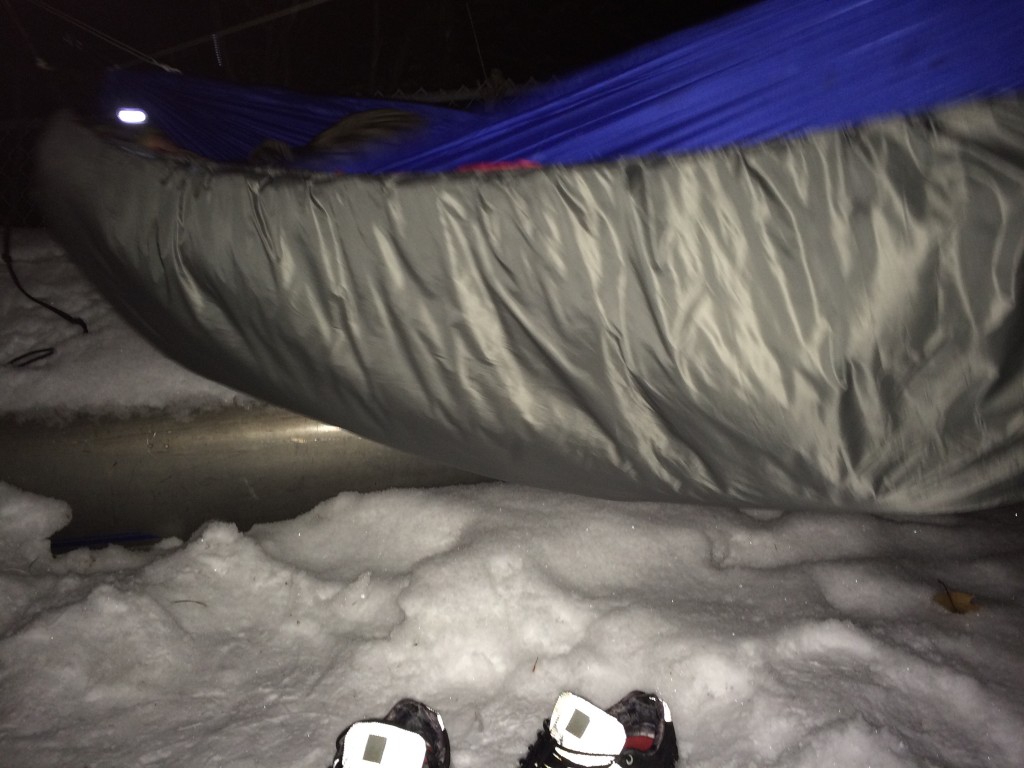 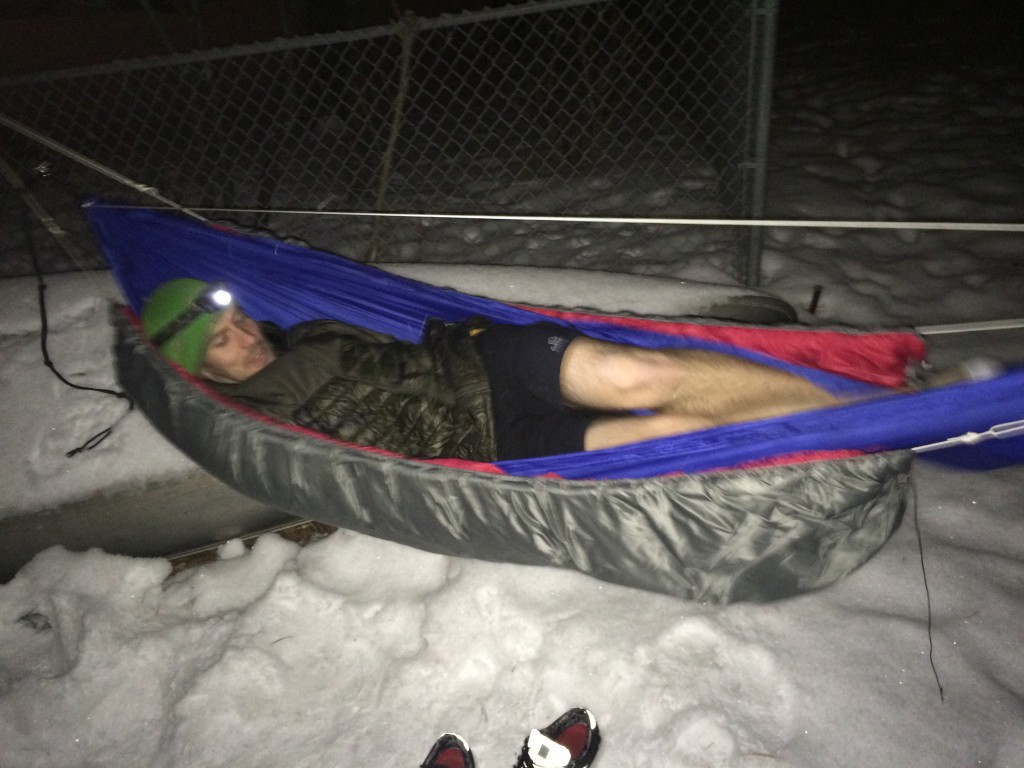