I woke up from my second night to sprinkles. I looked from under my tarp and saw sun, so was confused. It was a damp morning, and I truly noticed that when I arose and saw dew literally dripping off of the leaves and branches above me. There were clouds of morning mist! It looked like another morning of a wet tarp, but I knew the drill and packed everything away as-is. 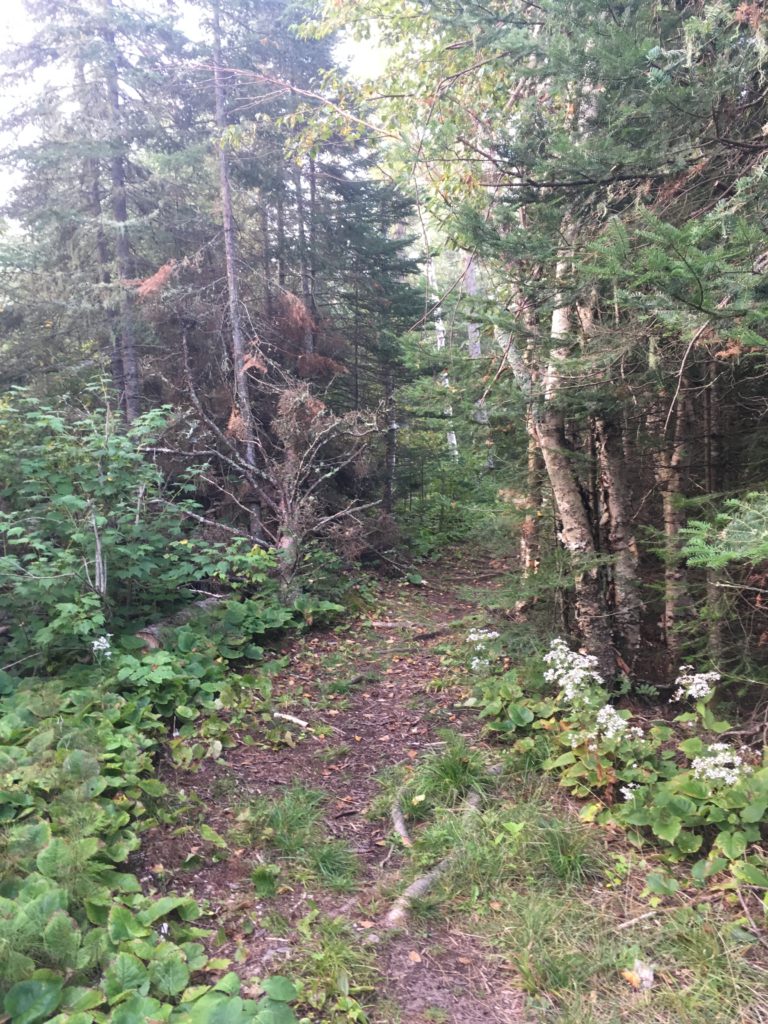 The morning was beautiful because of the dense fog and moisture, but of course made walking less than ideal. I felt sweaty immediately. The hike down to the Cascade River went quickly, and I followed blue blazes to the west side of the Cascade, which I hadn’t hiked. It was equally challenging as the east side in terms of elevation change, and the sun peering through the misty morning haze gave the forest a “Land Before Time” feel. 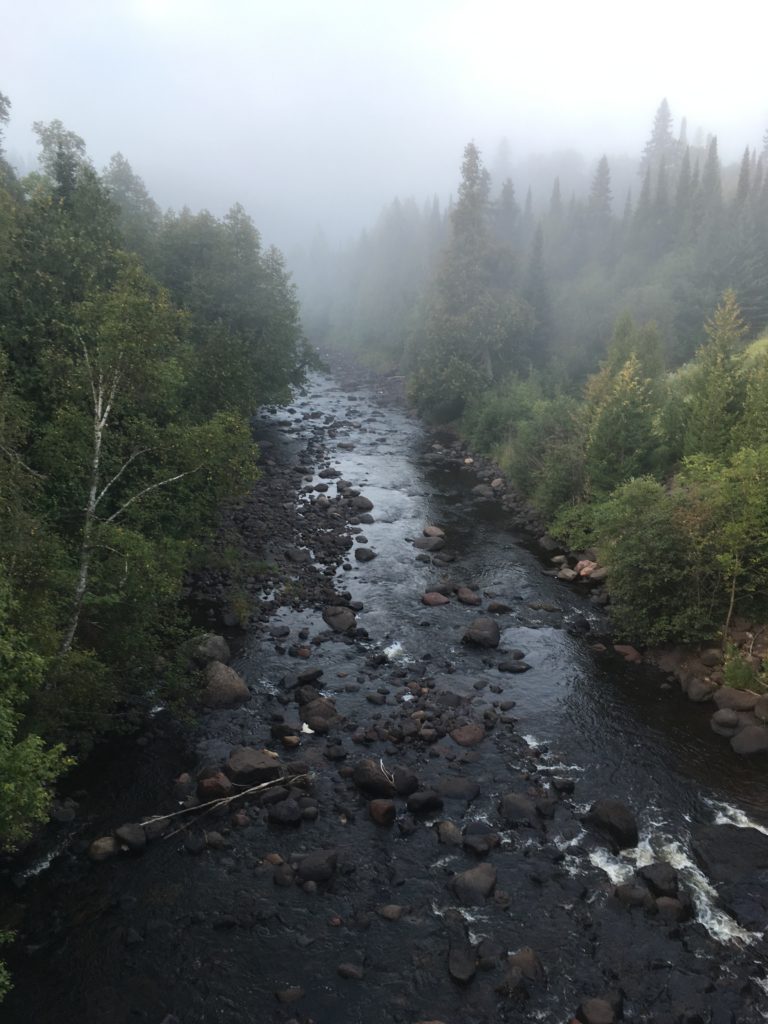 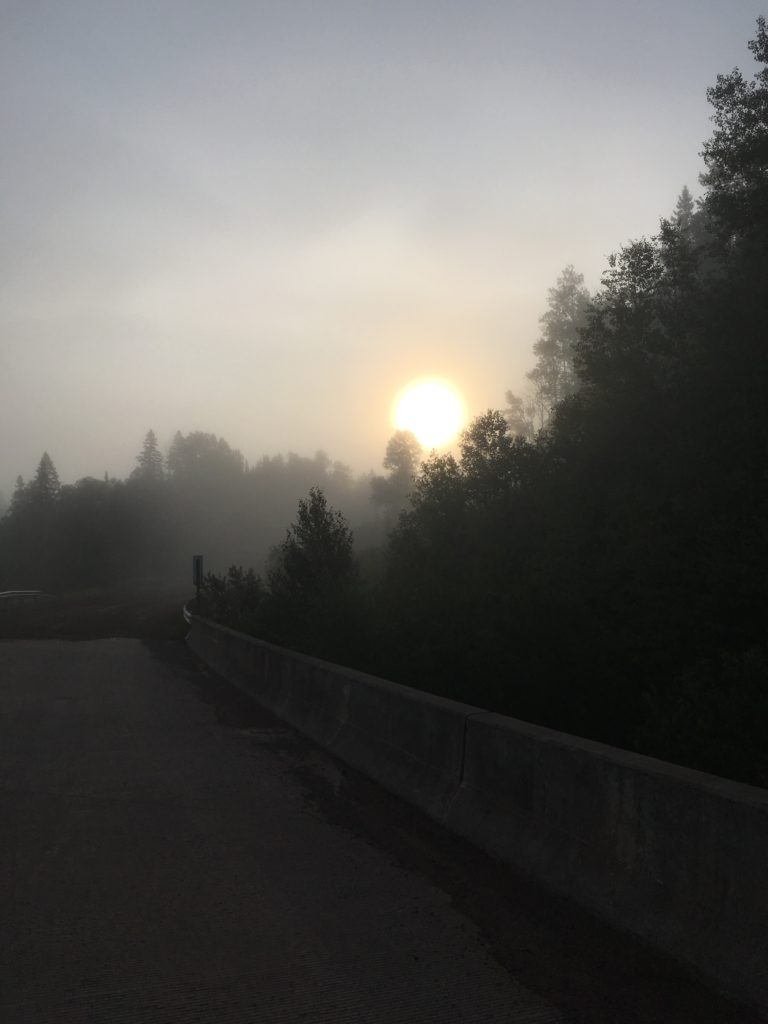 I saw just a few people in the early morning through Cascade River State Park, and as I left the river and hiked up toward Lookout Mountain, the sun burned away any excess moisture from the air and I was certain the moisture collecting on my own body was sweat. My legs were soaked from encroaching wet brush. It was all worth it, though, to bellow “MORNIN'” off of the large overlook to any late risers in the valley below. Well, it was only 9am, and I’m the weirdo up here waking up at 7 to hike all day… 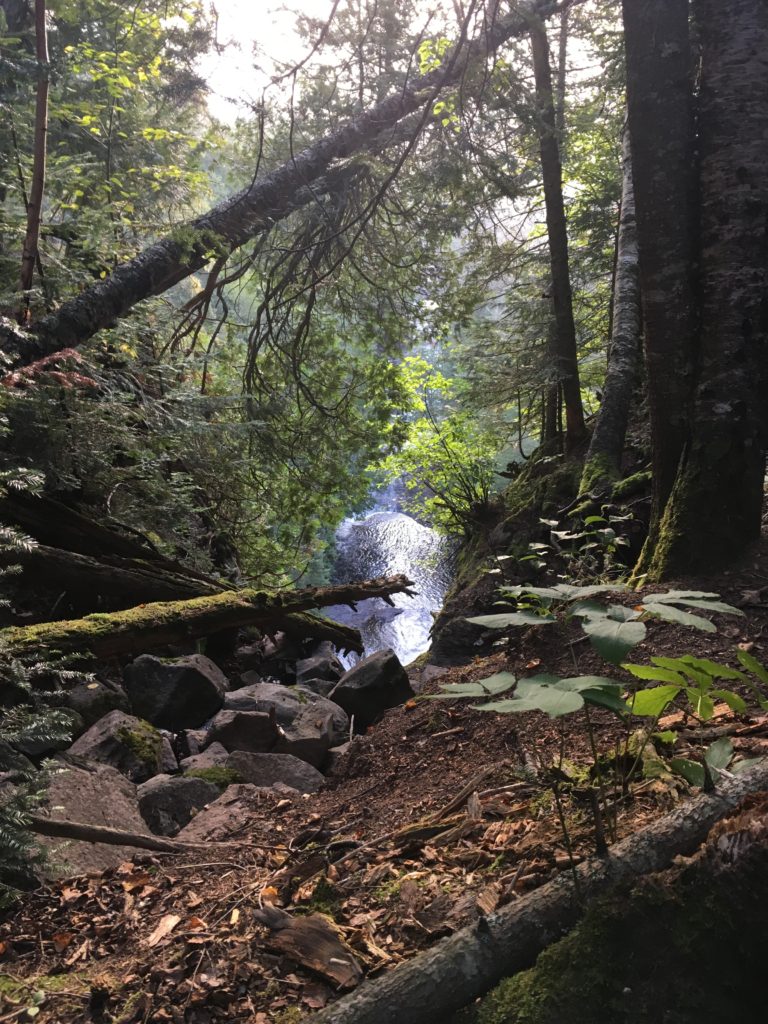 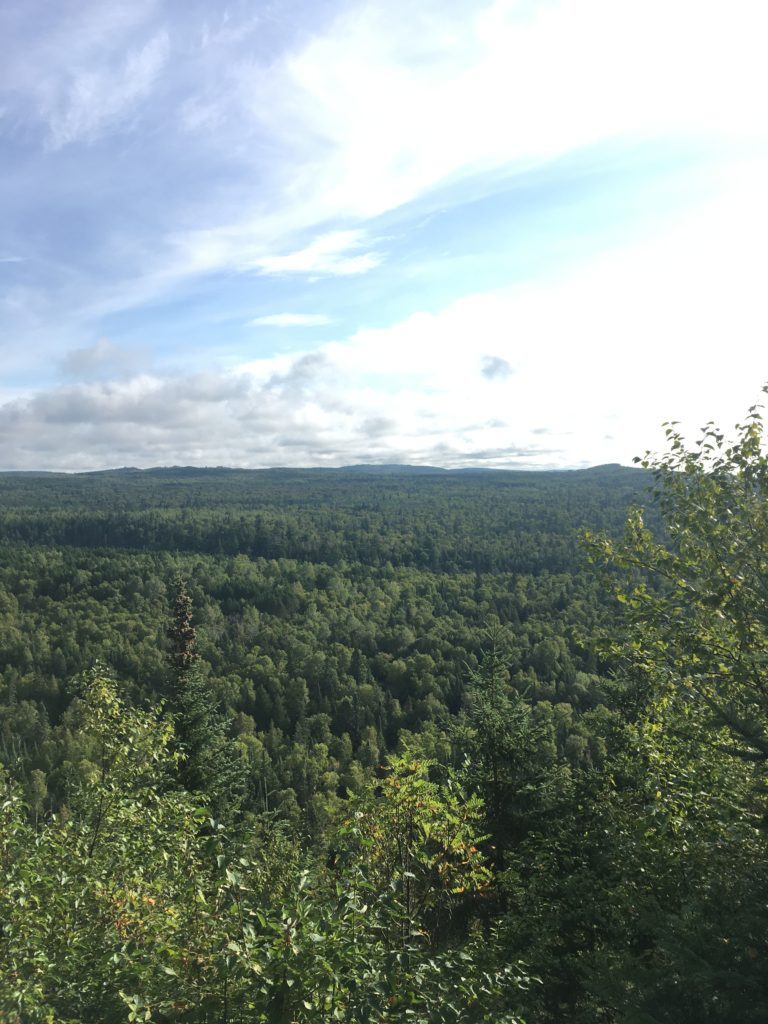 Along the ridge past Lookout Mountain, heading southeast, I got in the zone. I was movin’ good, and kept a steady pace until Spruce Creek. It was a perfect place to stop, and so I took my pack off, drank as much as I could and ate a small bit of food. It was about 10:30am and just over 10 miles in for the day. I was feeling pretty good. My legs and shoulders and body had been a little stiff right out of the gate, but since felt better and better even. I felt focused and kept telling myself that I know exactly what I need to do. Right now, it’s all about drinking water. Water is the lubrication for my joints and ligaments and muscles. Luckily, the few pounds of decreased weight and increased strength of my shoulders made slinging my backpack aside easy, and drinking on the go was a common occurrence. Still, there is no need to carry extra weight on my back when I can carry that water weight inside me. As I sat on a rock slugging down as much water as I could, my socks off, to dry out from being drenched by the dew-riddled overgrowth, a couple guys skirted past me heading southbound over the Spruce Creek bridge. Weird! I realized I was dawdling, although just a 10-minute stop, and packed up and started walking.

I headed up a steep grade out of Spruce Creek and quickly caught up to these guys. They let me pass, but I immediately got in a conversation and they tailed off of me. I felt bad because I could smell my own self and it was not good. I learned they’d stayed at the Spruce Creek campsite the previous night. When I told them I was thru-hiking and going for a speed attempt, they started asking me questions, and it was fun to tout my lightweight gear. We got into a fruitful conversation regarding rechargeable power banks. These two guys were out for the long weekend, one from Minneapolis and one from Michigan, although I did not catch their names. The one guy had to adjust his moleskin patch on a hotspot on his foot and I left ’em.

I cruised through Jonvick Creek and saw a small family who had stayed at Spruce Creek as well. The couple had a dog and a toddler with them, so I’m sure it was a luxe camping setup. I didn’t stay and chat and made my way to Lake Agnes. On the way, I saw a fellow Facebook user, who I mutually agreed with to high-five. It was so cool to see this guy Micheal in the flesh and I was smiling big time after our real life high-five. The density of other hikers on this beautiful Saturday was definitely boosting my confidence. By Lake Agnes, it was like a tourist attraction! I walked a few steps with some day hikers, chatted with a few hammock backpackers that had come from the south (and they mentioned missing the Springdale Creek campsite that I was headed to), and wrote in the Lake Agnes trail register as the wind whipped along the ridge. I forgot the mantra. I was feeling good through the splendid overlook of the winding Poplar River, descended and ate lunch on a rock right on the Poplar. It was my day for pepperoni for lunch, and it tasted surprisingly delicious with a handful of Cheetos. 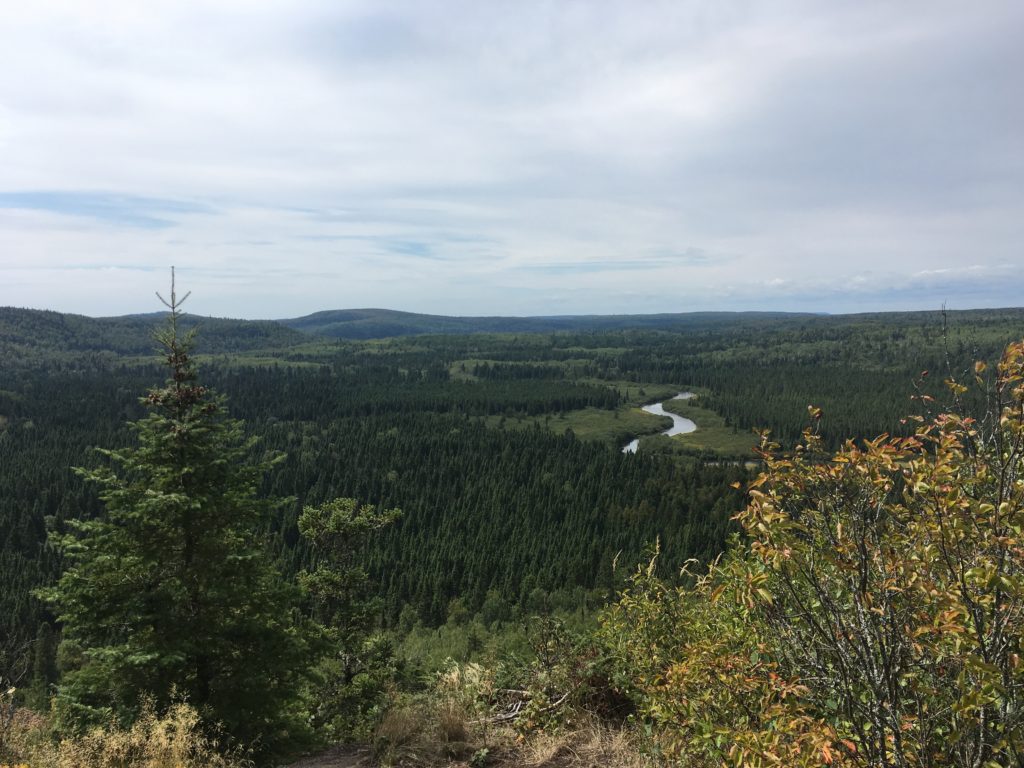 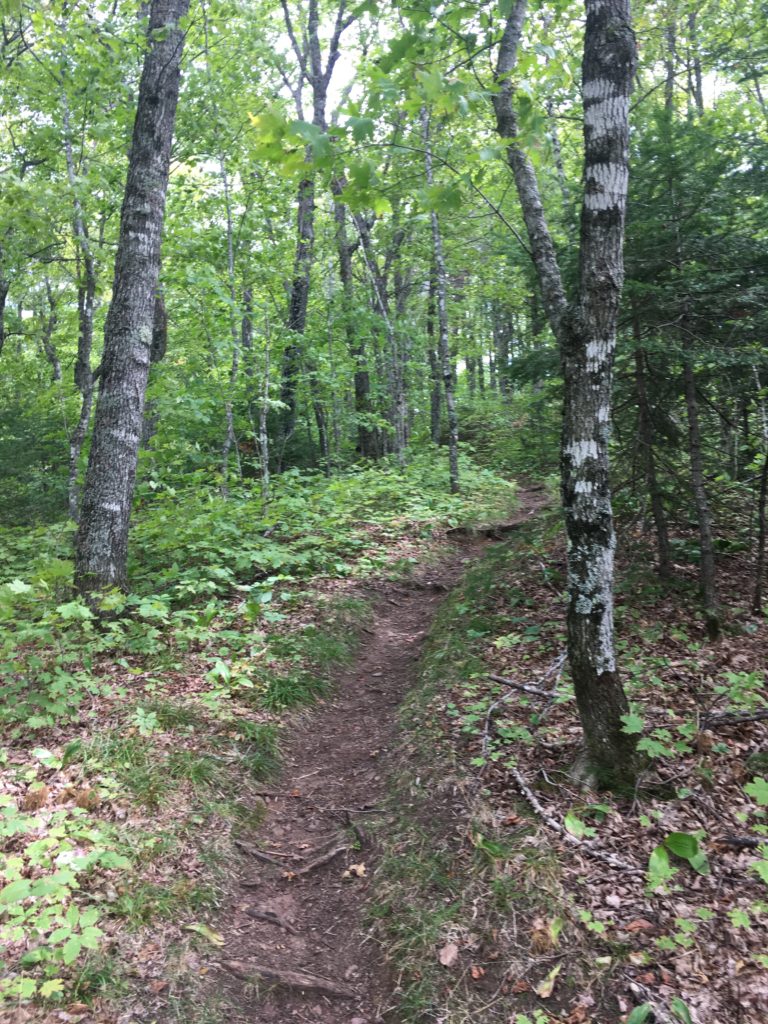 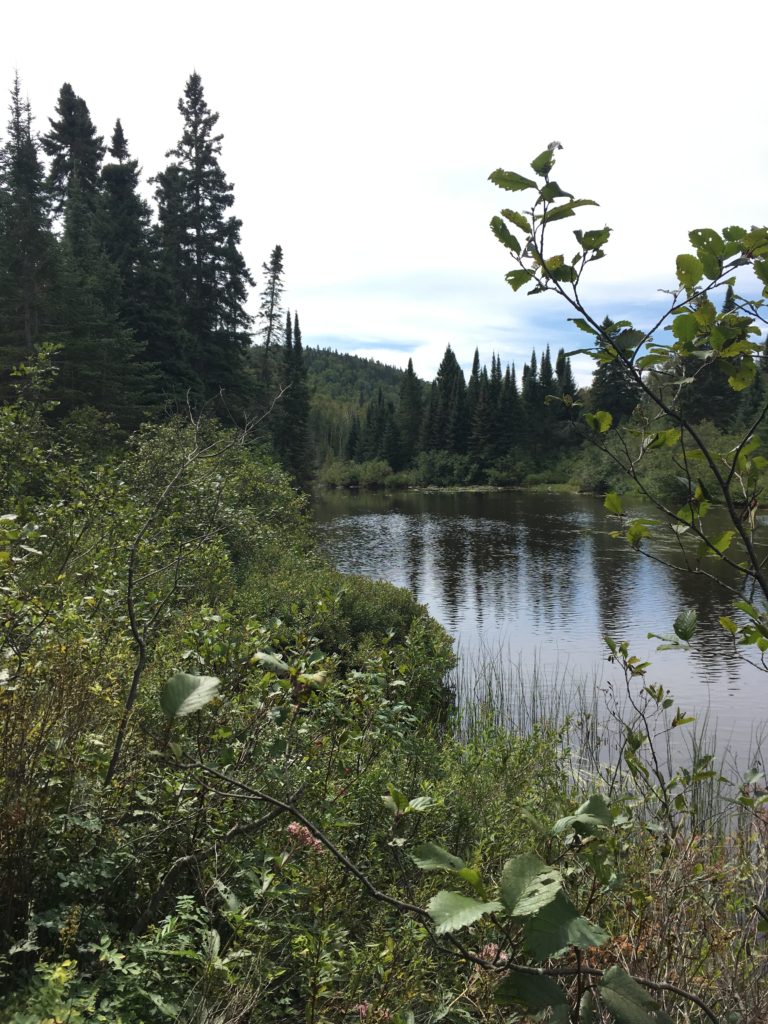 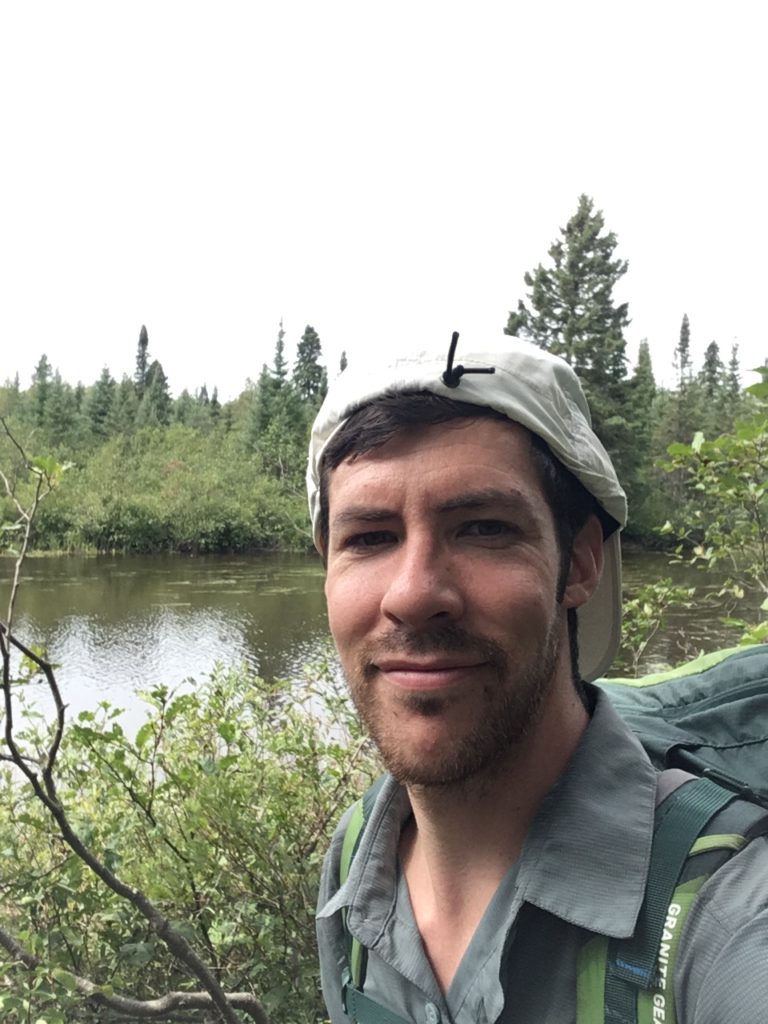 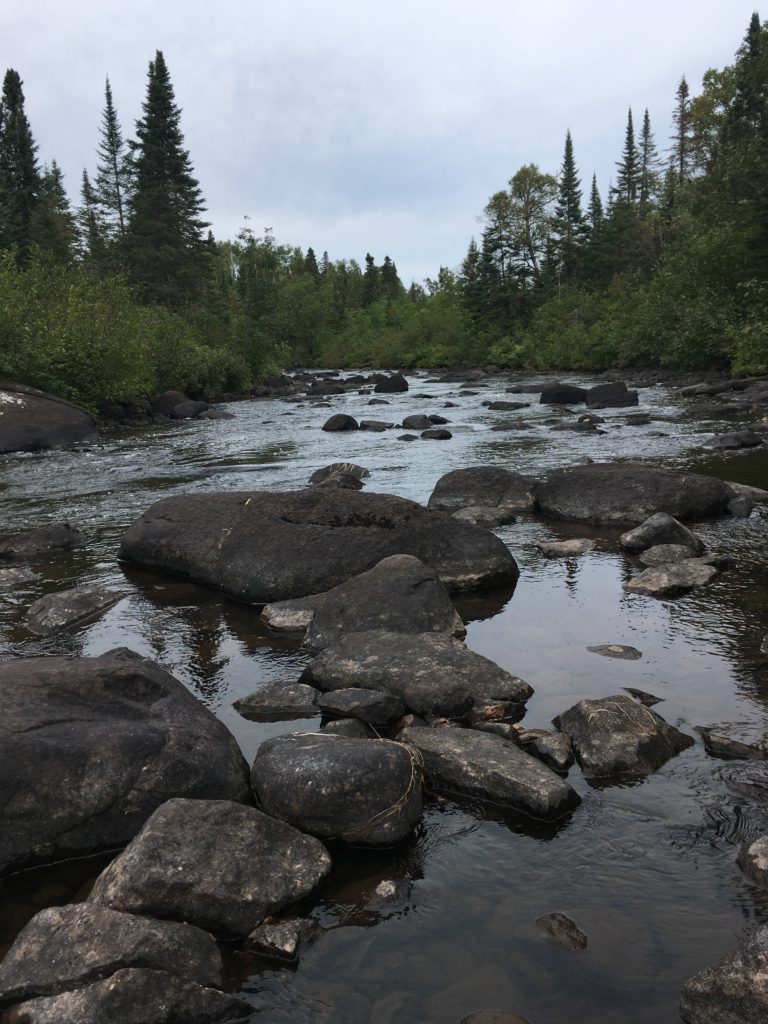 I started feeling a little more sluggish and tired after lunch. Thinking of the trail ahead, I knew the crux of the whole trip was to be day four and five. Day four is up Carlton Peak right away, down to Temperance, up past the Cross River, all the way over to the Caribou River, up to Horseshoe Ridge, and then a grueling last 10 miles through Crosby-Manitou State Park to my campsite. Then, the next day is past Sonju and Egge Lakes (which I recall as a really arduous section), up Section 13 and onto the most difficult and relentless elevation change on the whole trail through Tettegouche State Park, and past Bean and Bear Lakes! But after those two days, there is no way I can fail. If I can overcome the crux of days four and five, it is mentally manageable from there. STOP! I had to remind myself to take it one day at a time. It is stressful to worry over the perceived difficulty of upcoming days, and there is no need for it. So I hiked through Lutsen in the warm mid-day sun with my mind focused on getting to Springdale Creek today. 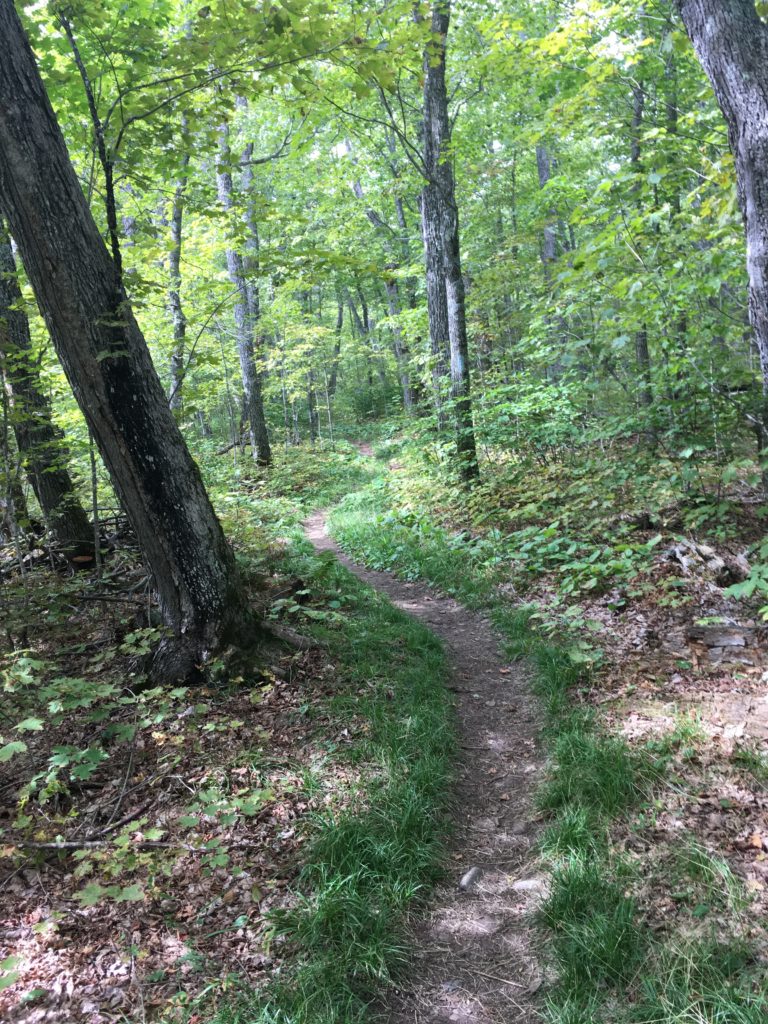 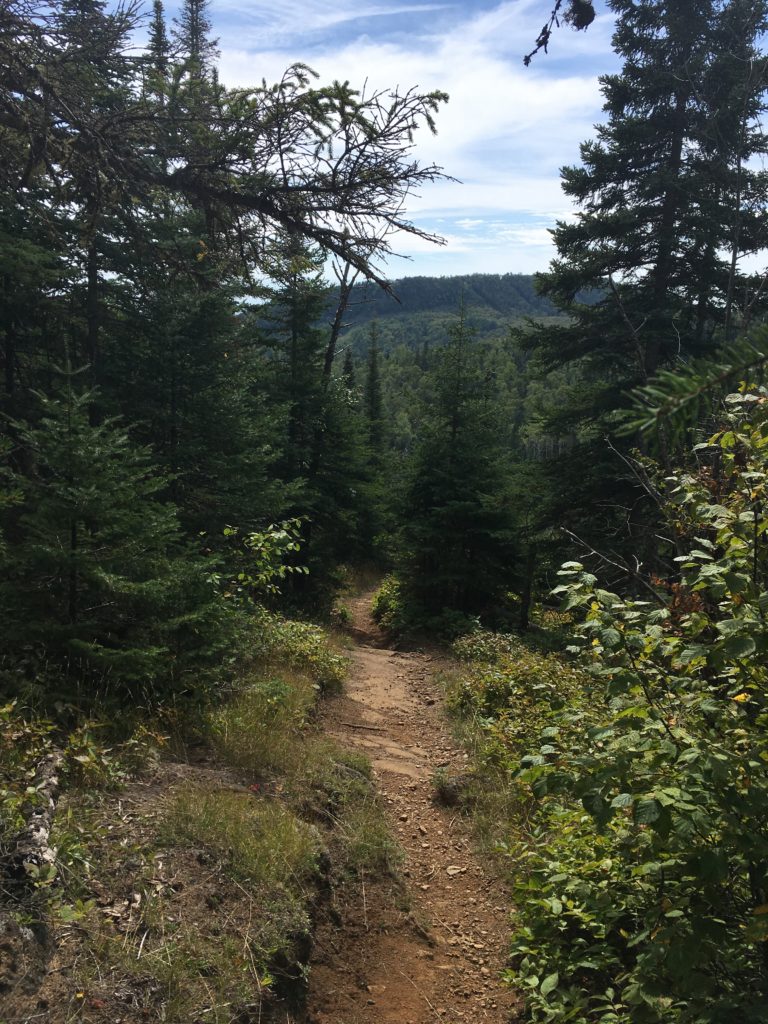 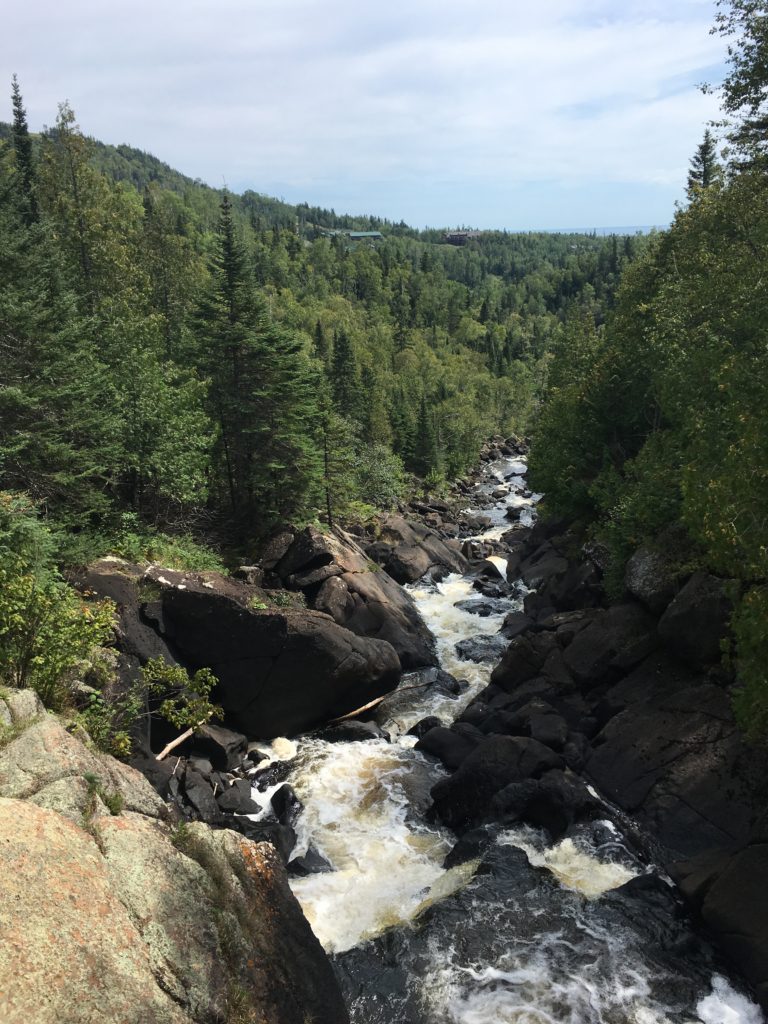 I knew that upcoming was some serious climbing and decending, but it was smooth sailing and easy walking after Moose Mountain. I passed the Mystery Mountain campsite, walked down, down, down, to the valley floor, and then awaited the strenuous climb up Moose Mountain. My legs and shoulders were feeling sore, and that familiar ache in my feet and big toes was coming back. It was hot. I drank some water, but knew I had to conserve. I had faith that my body would hold up, and pushed up through Moose Mountain, dripping in sweat as I reached the top, and then back down the western end. From there, I figured I’d take my afternoon break around Oberg Mountain, and so walked without stopping until I reached the Onion River where I found a flat rock to sit down. 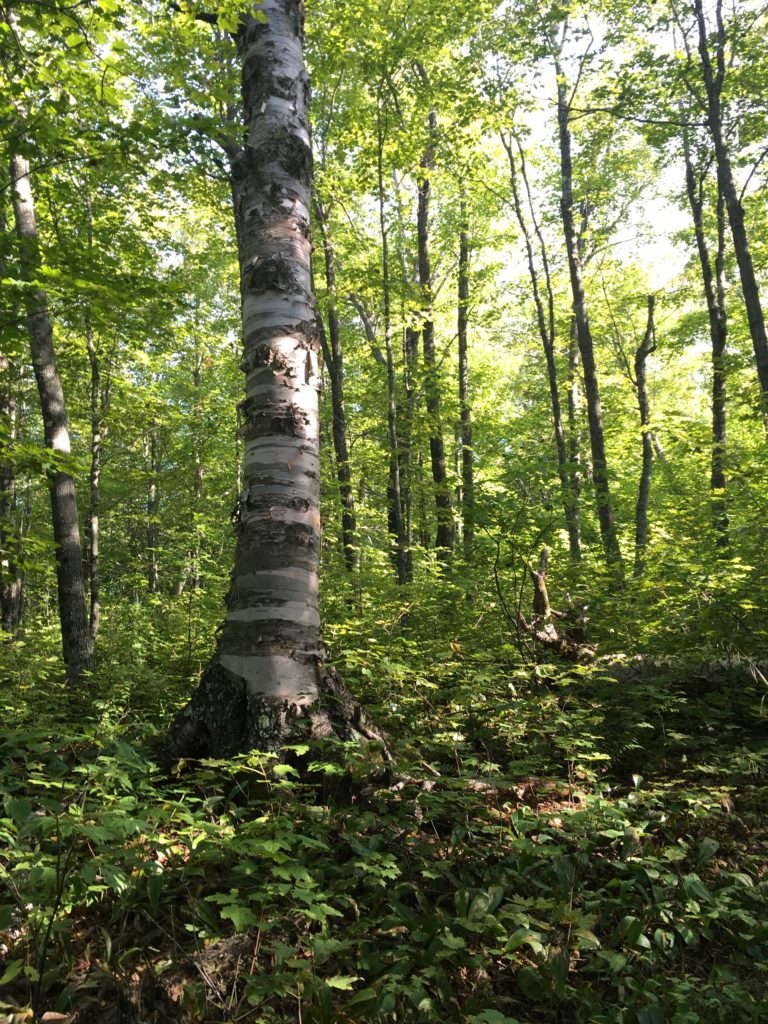 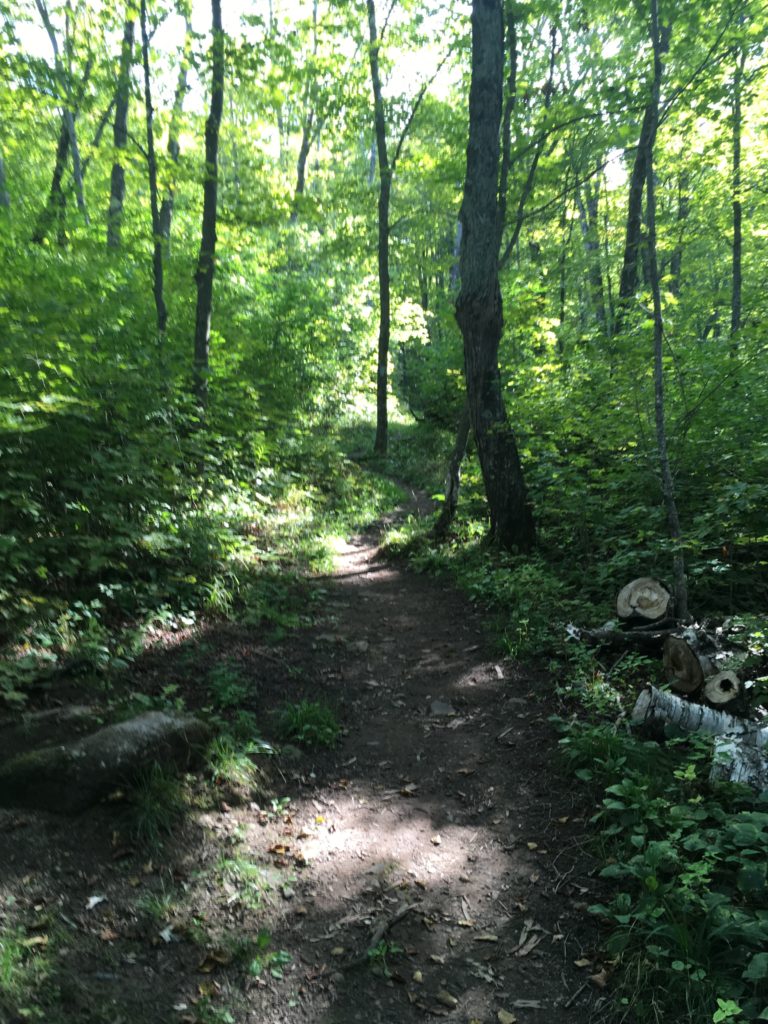 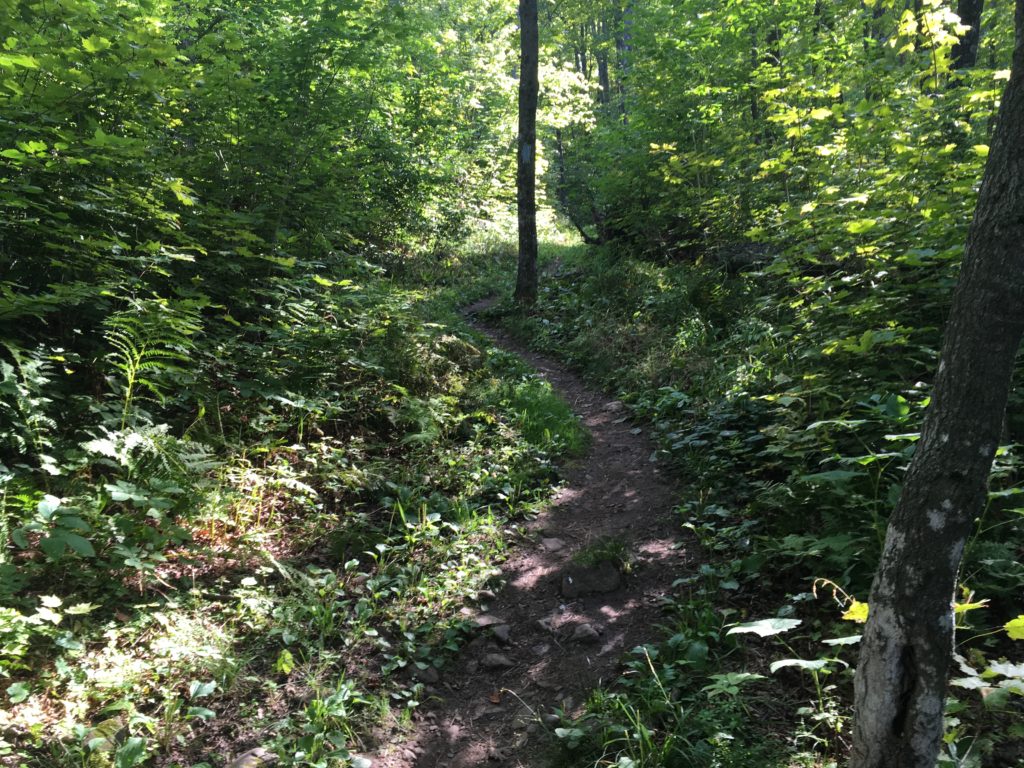 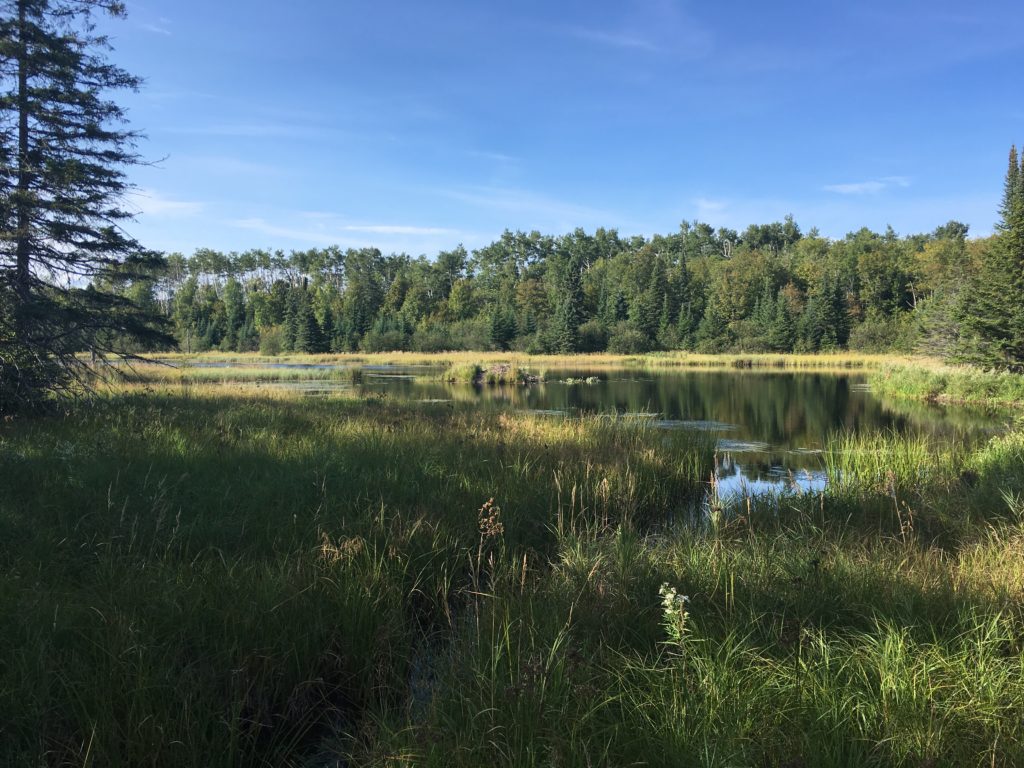 I passed one other guy sitting on the trail as his buddies were checking out an overlook, but I did not stop and chat for long. I was so close to the site, and very eager to set down my pack and relax. On the home stretch, I walked straight on to a couple sitting on a bench next to a fire ring. I was confused, as I didn’t remember the trail going right directly by the campsite… I asked if it was the campsite. They confusedly said yes, and I realized that my question was super unclear. What campsite? They said the sign marking the campsite fell down, and I walked right into it! Ahh. I immediately looked for a good tent pad and started unpacking. 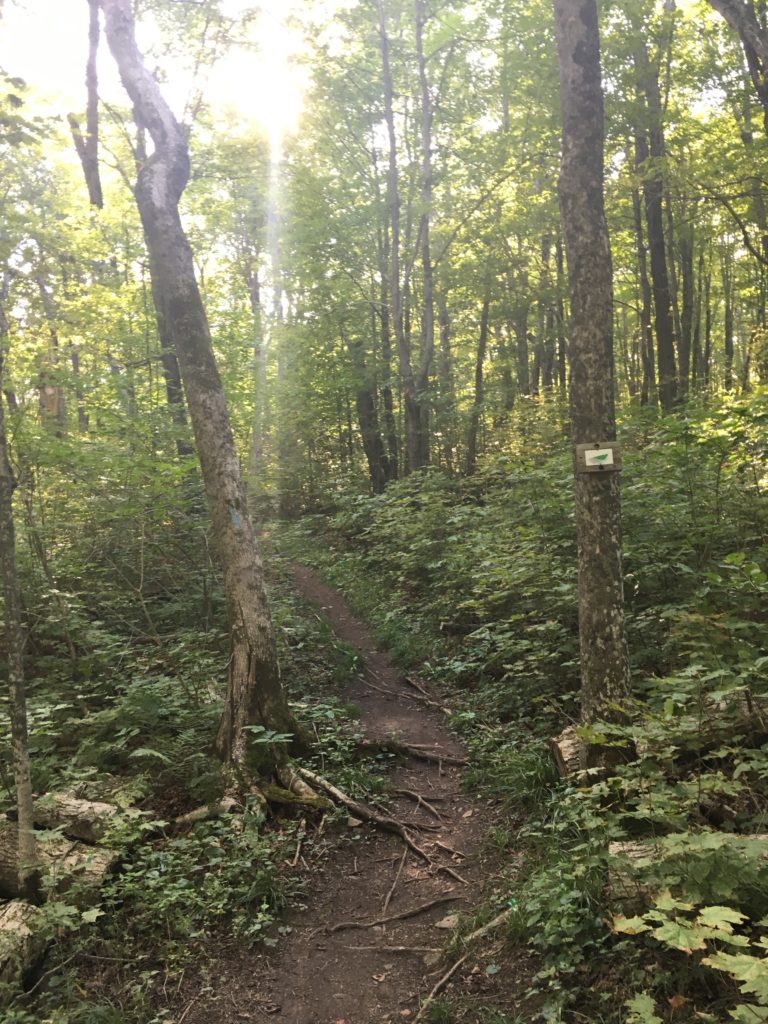 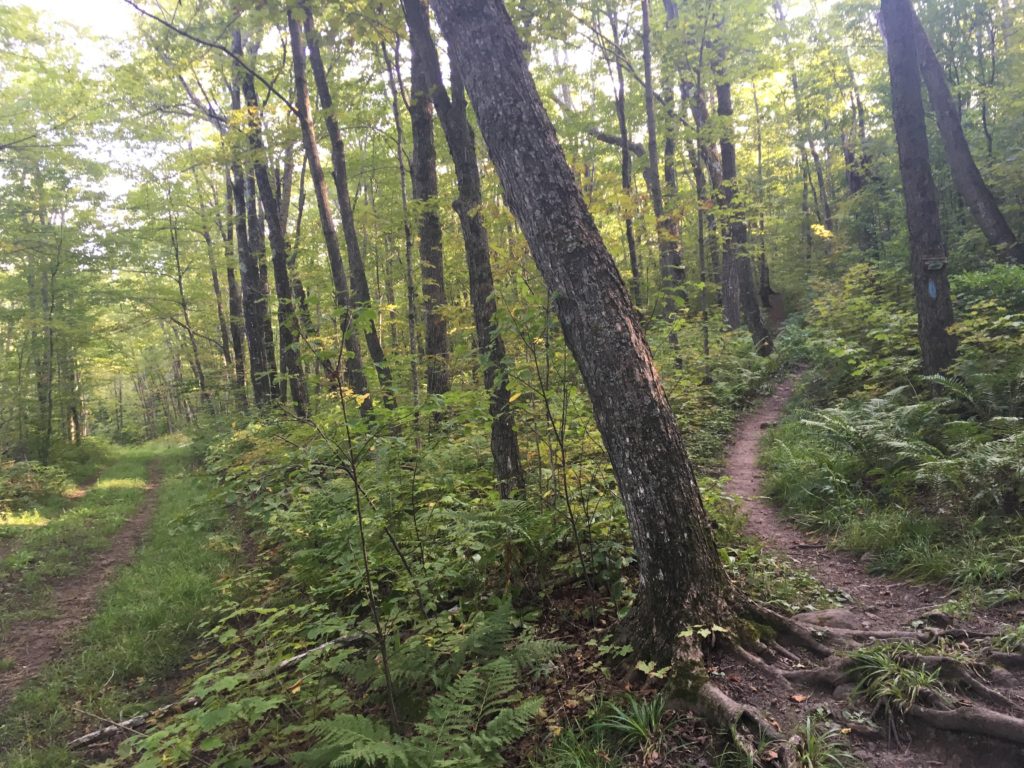 I chatted with the couple at the site already, and learned their names, Erin and Zach. They were backpacking for the weekend, and had made a push to be near the Britton Peak trailhead, a mile away and where their car was parket. I set up my wet tarp and went to the crick to get water. It was pretty dry, but had enough pools to fill up, drink as much water as I possibly could, and soak my feet. I got the campsite really early, and it felt great to have a few hours of downtime before night.

When I got back to the fire ring, a fire was made. Nice. In addition, I had internet access, so synced my GPS data, posted on Facebook, and checked the weather. Storms for late tomorrow, Sunday evening into Monday morning, which was Labor Day. My phone’s battery was doing great, and I felt less obligated to be constantly considering my usage. I charged up my watch, boiled water over the fire, and burned map 5 of 6. It was a great evening, and I was so happy to talk to this cool couple Erin and Zach. Meanwhile, several other groups showed up and before long, the Springdale Creek campsite was full to the brim. Everyone else kept to themselves. As the fire died out and the sun sank below the trees, I clamored away to bed, happy to feel a bone dry tarp. 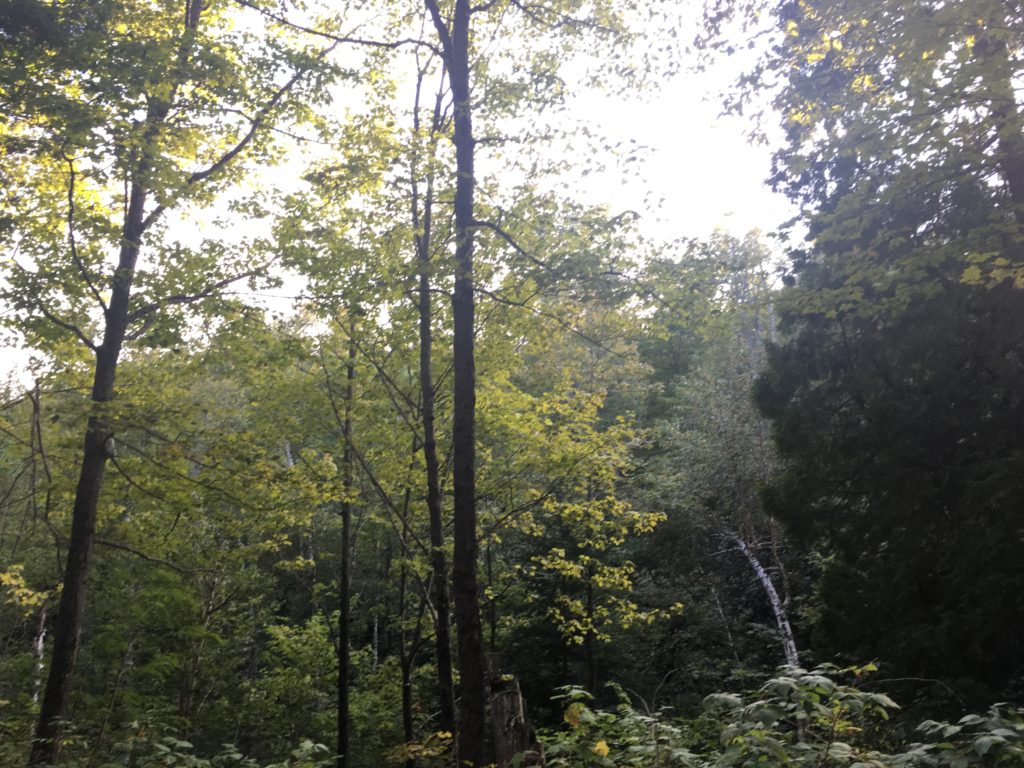